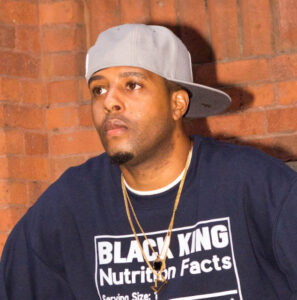 After an eight-year hiatus Amari Mar has returned to the sport of rap. The Brooklyn emcee went on a spiritual journey during his time away from the mic and has reappeared with what he calls his best work to date. “Grand Rising” is a 17-track album full of songs about mental, physical, and black empowerment.

Amari Mar talked to The Real Hip-Hop about his spiritual journey, the importance of financial literacy, and his new album, Grand Rising.

TRHH: The first release from the album is “King Sh!t.” The title is regal but the lyrics are humble. What’s the meaning behind the song King Sh!t?

TRHH: On the title track you say, “I speak the truth like I’m Louis Farrakhan.” Many people would be confused by that statement; why do you believe Minister Farrakhan speaks the truth?

Amari Mar: What I’m saying when I say “I speak the truth as Louis Farrakhan” is giving people that comparison like, I’m giving you my truth. I’m not saying everyone can agree with everything, but I’m just speaking my truth. I’m kind of comparing myself to Louis Farrakhan. He’s one of the few out there who I feel like means what he says. You may not agree with everything he says, but he stands for something. The things that I hear him talk about I pretty much agree with what he says.

TRHH: I agree. You had another potentially controversial lyric on the song “Holy Sh!T” where you say. “I still feel Cosby didn’t get his just due.” Why don’t you think Bill Cosby got a fair deal?

Amari Mar: I just felt like the way that everything unfolded in the court system, it was out to get him. I felt it was purposely done in a way for him to not get a fair trial. They pretty much railroaded him. I felt like they wanted to make him into an example. Whatever it is that he’s done in the past they were just trying to set him up. I just felt like he was done a raw deal. Whether people feel he did it or not, it’s just the way the court system handled it. It could have been handled a lot differently. I feel like there was a lot of racism played into it. That’s why I say he didn’t get a fair trial.

TRHH: On the song “Black Business” you speak about how your parents didn’t teach you about finances because they didn’t know much about it, which is the norm for most people. Why was it important for you to speak on the importance of black ownership?

Amari Mar: I feel it’s very important. This is something that we all have to know because they don’t teach financial literacy in school, especially when it comes to us as a group. This is something that we all need to learn and understand as far as building wealth and generational wealth. We have to understand financial literacy, so, this was something that I wanted to point out a little bit more to let people know about it more. Not to say that some people don’t know, understand, or it hasn’t been talked about before, but I think that this is the type of discussion that needs to be put out there more for people to understand. Like I said, this is something that they don’t teach in school. If anything, they teach you how to become a slave or work a 9-to-5. I’m not saying nothing is wrong with that, but it’s basically working to be a slave pretty much — a modern day slave. There are ways we can still make money and build wealth for our families and loved ones.

TRHH: You said Grand Rising was made during your spiritual journey. What did you discover about your spirituality and yourself along this journey?

TRHH: Who is the Grand Rising album made for?

Amari Mar: It’s made for everyone. It’s made for everybody. I’m just inviting people into my world and those that resonate with the message, the jewels that I drop, and the lyricism, those are the ones it’s going to be gravitated towards. It’s pretty much for everyone — whoever is able to gain something from it and use it for their own personal lives, as long as it’s done in a positive way.

Sherron Shabazz is a freelance writer with an intense passion for Hip-Hop culture. Sherron is your quintessential Hip-Hop snob, seeking to advance the future of the culture while fondly remembering its past.
View all posts by Sherron Shabazz →
This entry was posted in interview and tagged Amari Mar, Black Business, Brooklyn, Grand Rising, Holy Sh!T, interview, King Sh!t, New York. Bookmark the permalink.