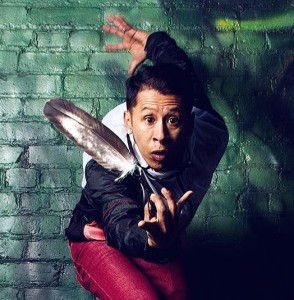 Artson is a Hip-Hop renaissance man. Beginning his career as a B-Boy, the El Paso, Texas native who now resides in Los Angeles now expresses himself as an emcee. Throughout his catalog Artson relays to the listener the life of a Chicano/Native American artist.

Artson released three consecutive projects in in 2016; Reverse Through Time (March), War Cry (April), and most recently E.A.R.T.H. E.A.R.T.H., an acronym for “Every Artist Responds To Her” is produced entirely by G Koop and takes a look at our planet and our purpose on it.

The Real Hip-Hop spoke to Artson about his start in Hip-Hop culture, his lifestyle store H.O.M.E. in Long Beach, California, and his new EP, E.A.R.T.H.

TRHH: What’s the meaning behind the title E.A.R.T.H.?

Artson: After dropping the other two I went back and worked with my indigenous brothers out here. I wanted to do a project where each song was talking about Earth and what I’m doing here, what my story is, and my connection. I wanted to get more into my roots. The title stands for “every artists responds to her” and it’s just what my business is here.

TRHH: What is your business here?

Artson: Getting in touch with my culture. When I grew up I wasn’t as in touch with my culture. I grew up in a border town, El Paso. We were forced to speak in English. My parents made us learn American culture. I didn’t grow up on a reservation so I didn’t learn none of my indigenous roots. It was Hip-Hop that led me to that. When I was young I heard Hip-Hop culture and I was attached to the words. I knew it was about community and bringing people together. It didn’t really make sense to me as a kid but I liked it. Throughout the years I started to realize what it really meant. I started to get deeper into how ancient Hip-Hop really is and how we’ve been doing this a long time.

The drummer was the chanter, the dancers were the fire, the people came together and we’ve always been cyphering and getting in that circle. We’ve always been doing graffiti; we were just doing it on the mountains. The drummer became a turntablist. It led me back to remembering who I am and where my roots come from and where Hip-Hop comes from. It kind of led to this album. I’ve been doing music but I never took it that deep. I wanted to get a lot of stuff out of me on these last projects. This one was at that point where I wanted to get that root out of me and let it grow. So I went and got my bros and we did this album.

TRHH: Why did you release so many projects so close to each other?

Artson: I took last year off to do all these projects. When I was done with them they all made sense to me as a story. I wanted to find a way to have them all be together. Also trying to be part of what’s going on with the times. Things are moving so fast with social media and the attention span is so short that I wanted to hit people over the head on overload almost to get them to realize that it doesn’t have to be like that. I wanted to go overboard and let you get a piece of me every month. I wanted to hit ‘em with it to let them know that people need to fall back a little bit. I wanted to speed up a little bit to almost prove a point.

TRHH: Tell me about the song The Blocks.

Artson: That’s off the Reverse Through Time project. That project is more of a street-hop album and telling a backstory of my life, getting a lot off my chest and letting people have an insight to things that I’ve held inside – things that I’ve been through, seen, and done. I’ve never really put it in my art like that so I wanted to let people in on that. Also for myself to get rid of those things that I was carrying. I wanted to get it off my chest. I’m at a good point in my life right now. I’m not carrying none of that energy with me right now, except for the fact that I never really told it. I wanted to push it out of me and that’s what happened with The Blocks, I wanted people to know that story of me.

TRHH: You started with breakdancing, right?

TRHH: Would you say that you have more love for emceeing than B-Boying?

Artson: That’s a tough one ‘cause I’m pretty much just a Hip-Hop head. I grew up when you tried to do all four elements. I really love B-Boying and I feel like emceeing gives me two different outlets. I get to express myself dancing, but then I get to tell my story through emceeing. It’s a really tough question. I actually love all four elements and when the culture comes together as a whole. I don’t like to see it separated like that. I like when it’s all in one house. I like going to a jam or a function where there’s emcees, B-Boy’s rockin’, graf on the wall, and the DJ’s are killin’ it. It’s a toss-up [laughs]. I love the fact that I can tell my story, but B-Boying is something that I just do. I definitely wouldn’t give up one for another.

TRHH: Tell me about your H.O.M.E. store in Long Beach.

Artson: It’s kind of like a lifestyle store. It’s kind of like the things I do and the way I live my life and also tying myself into my roots. It’s kind of like a trading post off of a reservation. It’s an urban trading post. I have indigenous medicine in there like sage, crystals, and sweet grass. It also has Hip-Hop gear and home décor stuff that brings positive energy into your home from all indigenous people from all around the world. We have some African stuff, some Chinese stuff, stuff from Thailand, and from the Natives in America. I have some alkaline water, cold press juices, and things like that because I like taking care of myself and my temple – it centers me. I’m just trying to surround myself with positive energy so I’m bringing all of that into the store just to give that opportunity to people to put things around themselves that’s going to bring positive light into them.

TRHH: The song Never Give Up is very inspirational. What inspired you to write that song?

Artson: Like I said earlier I took last year off to get these projects done. It was really the year before I went on tour and people were asking for CD’s. It was a little weird for me because I’d been on the road so many times and that wasn’t happening before. The CD game was done. It also let me know that it had been a while since I’d dropped something. People want CD’s? That’s crazy. It was a trip so I decided to take the next year off and do some music. It was inspiring to see youngsters asking for CD’s. Cats in college were like, “We don’t want a download. Anybody can download music online. We want a hard copy of your stuff.” It made me start thinking about not giving up on what I’m doing, what I’m chasing — this Hip-Hop thing.

I have to keep pushing, keep dancing, keep being around the emcees, and keep listening to what the DJ’s are doing. Technology is changing so fast, even with the DJ’s and you have to keep evolving with the times. I released these three projects just doing something different, also getting with my Native brothers and encouraging them to tell our story. Throughout history they’ve been trying to erase the Native people and our story. We’re here and we can’t give up on pushing the story of what our people have done for us and how they allowed us to still be here and talk our story. We’re doing it through Hip-Hop. An accumulation of all those things came into this song of never giving up on yourself, the culture, what your dreams are, and keep pushing and trying to get through it and take it further.

TRHH: What’s next up for Artson?

Artson: Trying to drop these videos. I’m getting these videos for the project done. I still have a couple other projects that I didn’t involve in this trio. It’s just trying to wrap those up and either drop another one at the end of the year or the beginning of next year. I’d like to drop one at the end of this year and finish up the last one next year. I’m just going to keep pushing and educating these kids on what Hip-Hop is. I do a lot of outreach programs, teaching, educating kids, going to the colleges and speaking about my story. I go out there and touch the people, express myself, do some shows, and hopefully motivating and expiring the next cat to go out there and do the same thing and keep pushing this Hip-Hop culture.

Sherron Shabazz is a freelance writer with an intense passion for Hip-Hop culture. Sherron is your quintessential Hip-Hop snob, seeking to advance the future of the culture while fondly remembering its past.
View all posts by Sherron Shabazz →
This entry was posted in interview and tagged Artson, E.A.R.T.H., G Koop, H.O.M.E., interview, Never Give Up, Reverse Through Time, The Blocks, War Cry. Bookmark the permalink.