Posted on February 7, 2022 by Sherron Shabazz 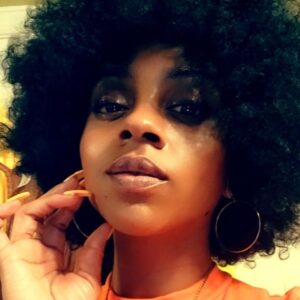 DMV area emcee Backwood Sweetie seemingly came out of nowhere to drop one of the absolute best Hip-Hop albums of 2021. “Christina Shauntay’” is Sweetie’s government name, but it’s also the title of her debut album. The 13-track album is a no-nonsense, sample heavy, pro-black release that is severely needed in today’s rap landscape.

TRHH: Why did you title the album Christina Shauntay’?

Backwood Sweetie: I rebranded myself. I was “Dutchess” and I had some friends calling me Dutchie for short. I stopped recording for about six or seven years, so, coming back I decided to have a new name. I thought it was important to introduce myself and my real name and let that be my debut and just kind of come out like, this is me.

TRHH: How did you get the name Backwood Sweetie?

Backwood Sweetie: I’m a smoker [laughs]. I used to smoke Dutch’s. My name was Dutchess then and I actually have “Dutchess” tattooed on my leg. I evolved and I started smoking Backwoods, so I’m Backwood Sweetie. I always get the Backwoods Sweets as far as the flavor [laughs]. It’s my little nickname.

TRHH: I don’t get the smoker thing from your music though. Who inspired you to want to be an emcee?

Backwood Sweetie: 2Pac, my first love in Hip-Hop/rap. 2Pac, Nas, Scarface, storytellers. That got me into wanting to turn my poetry into stories that I was already writing into something else. Hearing myself and how I sounded I was pleased [laughs]. I thought I sounded like an emcee when I first started rapping doing talent shows in middle school.

TRHH: How long have you been rapping?

Backwood Sweetie: Actually, performing and getting on stage at 13, but I’ve been writing for forever. As long as I could write.

TRHH: On the song “Justice For” you speak on black people who’ve been murdered by police and you say “Crackers done got too comfortable/The racism is terminal.” Why do you think racists have gotten so fearless in the last few years?

Backwood Sweetie: The people in the position of power have made them comfortable because they represent that. Donald Trump and others like him. They are definitely racist people and have shown that. His supporters are out there. It’s in our face every day. It’s normal. It’s like you expect it.

TRHH: I expect it now, but there was a time when it wasn’t cool to be racist. I know they’ve always been there, but now they’re like bold about it. It’s too much.

Backwood Sweetie: I’ve worked in customer service, as a barista, as a bartender, in mom and pop spots, neighborhood diners, and stuff like that. I really experienced it, sometimes as the only black person working in there, especially as a bartender. So, dealing with it at work it was tough.

TRHH: How did you deal with it?

Backwood Sweetie: Before COVID and everything shut down, I was a wine consultant for three and a half years and I was the only black person in that space. We had customers come in that didn’t want to deal with me. They wanted to deal with somebody else and assumed I didn’t know what I was doing. They’d ask “why are you here?” and I’m obviously here to help. Just kind of working through it, because what else can you do? I was there I felt like to get a check. I loved what I was doing, but obviously I had another passion.

TRHH: You have a line on the song “Garvey” where you say “Them pigs only timid when they see pigment.”

Backwood Sweetie: That line gets brought up a lot.

TRHH: ‘Cause it’s dope! And it’s true. That’s why. What do you think should be done to fix the situation of white cops being unfamiliar with and policing black neighborhoods?

Backwood Sweetie: I don’t think that white cops should be in black neighborhoods. There was a video I saw recently, I forget where I saw it, but there were all black officers trying to apprehend this black guy. He had a gun, they took him down, no issues. Nobody got killed, nobody got hurt. There was a lot of yelling and screaming and a little commotion, but everything played out smooth at the end. Nobody died. Seeing that, I felt comfortable watching that as opposed to watching white officers handle or deal with us. You kind of just assume and you’re waiting for the worst thing to happen.

TRHH: It’s very unfortunate. I agree with you, but that’s tough though because how do you exclude white people from a job?

Backwood Sweetie: I wrestle with the whole “defund the police” and “abolish the police.” Like, what do we do with that? I do feel like we need to abolish the police and create something new and something that works. Community based social workers. Just people in the community. Obviously, a lot of people have guns. I don’t think you need to be a police officer necessarily to take care of the neighborhood. Maybe Neighborhood Watch can become something greater if it’s the people in the neighborhood.

TRHH: On the song “Coffee” you break down America’s crimes. What do you say to those who believe that you live in the freest country in the world and you should not bring up its negative aspects?

Backwood Sweetie: I don’t know what to do with that. I think that, that’s all that we should be talking about – the ugly – because that’s every day. It’s scary out here.

TRHH: I agree with you, but I’m going to challenge you though. It’s something I wrestle with. Not just in America, but with everything. I’m a negative person…

TRHH: Extremely negative. It’s my upbringing. I’m from the west side of Chicago and there was nothing good for me coming up. I’ve always been this way. As I get older I try to see the good in things. It’s not easy for me, but I try. There are people who say “black people have it better than they ever have” and that’s true on some level in this country. If you look at our history in this country this might be the most freedom we’ve had, but like we just talked about, the police can kill you and walk away scot-free. You might not be able to get a job because of your name or the way you look. There are still issues, so, I kind of struggle with it. But you don’t feel that way?

Backwood Sweetie: I’m just disgusted with it all. They don’t want us to learn about our history. Growing up I learned about things and it’s like, “Why didn’t I learn about this in school?” Why am I just learning about Stokely Carmichael and Marcus Garvey? Why am I just figuring out who these people are? And I’m in my thirties. Are you kidding me? I talked to my mom about these same names and she didn’t know who they were. I’m kind of over it all. I think that’s where the album came from – me being fed up and needing to vent about it. Not knowing what to do with my anger so I put it there. Put it where I know it’s safe.

TRHH: I wanted to mention that too regarding the Garvey song. I don’t know how old I was when I learned about Marcus Garvey, but I do know that they got rid of him.

Backwood Sweetie: They deported him.

TRHH: Anything pro-black, the Black Star Line, Back to Africa, whatever, anything to lift up black people they crushed.

Backwood Sweetie: Anything that looked like it was going to work.

TRHH: Now, are you pleased with the reception you’ve received from Christina Shauntay’?

Backwood Sweetie: Very much so. I had a couple of people send me a couple of my lyrics in a note attached to a Cash App. It’s been nice. It’s a good feeling. I wanted people to be affected. I want to move someone. I wanted to cause a bit of a stir on social media. I wanted it to cause attention and make some people uncomfortable. It did what it was supposed to do. I’m pleased and I’m ready to work on the next thing to keep this momentum. I have my hand in quite a few pots.

TRHH: Who would you say the Christina Shauntay’ album made for?

Backwood Sweetie: For the unheard, the people that need to vent, the people that are upset, the people like me – moms that want to go out and protest, but don’t want to get locked up. Who is going to take care of my kids like I take care of my kids? People that just need that outlet. I feel like it was definitely therapy for me. I made this for us, for the culture, black people. I made it for my white friends and friends of other nationalities to understand me better. I feel like I can express myself better through words when I write and when I rap. I made this for everything, for us, for life.

Sherron Shabazz is a freelance writer with an intense passion for Hip-Hop culture. Sherron is your quintessential Hip-Hop snob, seeking to advance the future of the culture while fondly remembering its past.
View all posts by Sherron Shabazz →
This entry was posted in interview and tagged Backwood Sweetie, Christina Shauntay’, Coffee, DMV, Dutchess, Garvey, High Heels, Hyattsville, interview, Justice For, Maryland. Bookmark the permalink.