Chuck D: Nothing is Quick in the Desert

Posted on January 1, 2018 by Sherron Shabazz 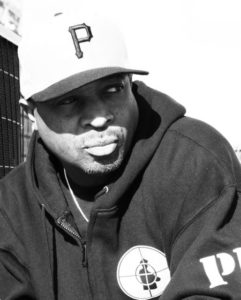 2017 was a busy year for Chuck D. He released a surprise Public Enemy album for free to commemorate the group’s 30 year anniversary, finished up the debut album for his rap/rock super-group Prophets of Rage, and took part in a book that celebrates our culture’s rich history called “Chuck D presents: This Day in Rap and Hip-Hop History.”

The book chronicles important moments and music in Hip-Hop from its inception in 1973 to present times. Throughout “This Day in Rap and Hip-Hop History” Chuck offers words of wisdom on various artists and their achievements in Hip-Hop. Who better to give us play by play on Hip-Hop’s greatest moments than Mistachuck?

Chuck D spoke to The Real Hip-Hop about being part of the rock band, Prophets of Rage, the Public Enemy album that was given to fans for free, and his role with the book, “This Day in Rap and Hip-Hop History.”

TRHH: How did you become involved in ‘This Day in Rap and Hip-Hop History’?

Chuck D: It actually was a recorded segment on my weekly Rapstation radio show “And You Don’t Stop.” Two guys, Duke Eatmon and Ron Maskell from Canada, they already were curators of Hip-Hop special programs on radio up there in Montreal. I thought they would be an easy fit to do it on my radio shows on Rapstation. Since they collected 3-4-5 years of flawless recorded content they already had the written content down. I said, “Look, this should be a book.” It took a couple of years to make it happen.

TRHH: Did you chip in at all with any of the research part of the book?

Chuck D: No, but I spanned across the total time. The research was done by Duke and Ron and also Flatline who actually puts together the radio shows on Rapstation, And You Don’t Stop. Although I’m a graphic artist I didn’t even contribute to the graphic arts either. I have a digital squad called Mad Urgency. They are fantastic illustrators from across the world. I was kind of the figure head that made sure it all came together. I didn’t do any art and I didn’t do any facts on it.

TRHH: In reading the book I discovered that in 1984 KDAY in Los Angeles began playing Hip-Hop 24/7. This was a surprise to me because being in Chicago I remember in the late 80s hearing rap for one or two hours every Saturday night. It wasn’t until the early 90s that Chicago stations began playing rap for more than one day…

Chuck D: Disco Dave. Support! It wasn’t actually the first all day Hip-Hop station. I think it was WRAP in Norfolk and WKIE in Richmond that were the first 24 hour rap/Hip-Hop stations that I knew of on the AM dial. So I wasn’t too surprised when I came out to Los Angeles and heard KDAY. I was happy.

TRHH: Was there a piece of information in the book surprised you?

Chuck D: Oh there’s endless pieces. I can’t name them off the top of my head, but really this book could be 3000 pages long. The challenge was getting it down to 380 pages long. There are things that are happening every year and every day. We tried to keep the high road on it, Sherron. We didn’t need any crazy drama or beef. I tried to get to the fact of the matter because too often rap and Hip-Hop is stereotyped into this problem area of music and whenever they want to give it coverage it’s based on some issue that it had. I wanted to tell people that there are a whole lot of unbelievable achievements when it comes down to the art form. And we have to honor it as an art form and curate it, master the curation of all these artists, and not overlook it. Jazz has been a very, very important yet scrutinized, yet passed over, but also managed from the outside art form. Hip-Hop is kind of begging for that management.

TRHH: You released the Public Enemy album ‘Nothing is Quick in the Desert’ last June for free. What led to you making this album free for fans for a while?

Chuck D: We were entering our thirtieth year. I had been busy with Prophets of Rage and with Flavor. I took the executive order and said, “What do we give back to the people who have supported us for 30 years?” I just disagreed with the “take, take, take” with no give. If somebody has been dedicated to support you with their mind, intention, and their wallet for 29 years why don’t we do something unprecedented for our thirtieth year? That’s where that came into play.

Chuck D: No, Public Enemy is really free. Prophets of Rage is more regimented. You got five people who are the best at their positions in the world and you can’t take no seconds off [laughs]. Tom Morello is like the Michael Jordan of rehearsals. After you finish rehearsals you don’t stand a chance of coming close to losing. Public Enemy is more freewheeling, under the auspices of my control, and it’s a lot of fun there, too. But this is a lot of fun just playing my one position as an emcee for a power rock band. It’s two different things but equally enjoyable. Prophets of Rage has played in front of 2.7 million people before their first album which is unprecedented. You always gotta have your A-game on.

TRHH: We’ve talked a handful of times and we’ve never discussed Muse Sick-n-Hour Mess Age. It seemed to me at the time that that was a time of change for Public Enemy. What was the mindset of the group going into that album considering how much things had changed in rap since the last album to 1994?

Chuck D: The biggest mind difference with Muse Sick-n-Hour Mess Age was to go totally against the grain and do as many unpopular moves sonically as you could possibly do. That was the goal. Music had slowed down and we wanted to still be fast in some aspects. People thought gangsta rap was a trend and we said yes it’s a trend but pro-positive points of view are cool, too. The liner notes drew up a scenario with the album that said the country would be taken over by David Duke, the Euro nations would all consolidate, a bunch of stuff with the world climate like earthquakes, droughts, water rising, and all that stuff. I did that as look into 1999. Muse Sick-n-Hour Mess Age is released in 1994 but it tells itself it’s a 1999 album. That was the secret in it. It wasn’t made for 1994, it was made for 1999.

TRHH: I love hearing you talk about tours and one tour that I went to hit Chicago on New Year’s Eve of 1991. The Greatest Rap Show Ever featured Public Enemy, Geto Boys, DJ Jazzy Jeff & The Fresh Prince, Naughty by Nature, Queen Latifah, Kid N Play, A Tribe Called Quest, and Oaktown’s 357…

Chuck D: Where was that at? Rosemont?

TRHH: Yep, Rosemont Horizon. That is as stacked as any show could get. I remember being upset that Geto Boys, Fresh Prince, and Tribe’s sets were so short, but looking back it must have been impossible to divide set times with so many acts on the bill. What are your memories of that tour?

Chuck D: Our memories were of us simply saying that we were one of the biggest acts of the time so the biggest acts gotta take everybody to their different regions so they can get down and play in front of their constituencies. That was what it was all about. We tried along with Ice-T to try to be the elder statesmen that would tell everybody, “Look, this is not us versus you. This is all of us doing a four hour show. So we’ll be here to support you as much as you’re around and understand this is how the order is going to go on.” It’s funny because we’re ten years older than everybody and they always looked at us as older brothers. When I see everybody even to this day they remember the mentorship, the older brother looking out type of vibe, and just the fact that somebody was concerned about their betterment as much anybody else.

TRHH: Do you still see that today with artists that are coming up under the label or that you encounter?

Chuck D: Not really. I see that a lot of artists don’t know their power and they kind of forsake their responsibility on talking to other artists. I think that’s a shame. I get the question all the time, Sherron, like, “Yo man, what do you think about artist’s social responsibility?” I said, “Number one artists should have some kind of responsibility. If it ain’t social it should at least be to their peers,” If you’ve got an artist that’s been out ten years and he can’t give no advice to somebody just coming in or somebody young coming in doesn’t want to hear no advice, I don’t know what that’s about. We have to work on our bridges a little better.

Chuck D: I don’t know, I think I was in the right place, right age, right time, and it was at the turn of the century. It was a bunch of different things coming out in technology as well as the way that people heard, saw, and listened to things. In 1998 it was cumulative as far as how it influenced me on what everybody was doing and what was going on. I wrote He Got Game which kind of led to my love of sports and the sports world, especially ball. I really went headfirst into all this stuff that was already loaded up in me. I just let it out.

TRHH: I loved the He Got Game album.

Chuck D: When I see people talk about bars, I got bars on that album that could zoom past people. If you don’t know ball a lot or if you just know rap or don’t know rap, you’re not going to notice the spit.

TRHH: The book is titled ‘This Day in Rap and Hip-Hop History’ during a time when many of the younger generation are apathetic about rap history. Why is our history important and why should young people in particular pick up this book?

Chuck D: Every generation has their thing but they should also know where it comes from if that they say that love it. If they say they don’t love it, the young and the old, well if you don’t dig it how much of it do you need to learn about? The answer could be none. This is for people that say that they love it. So why freestyle the facts? Get the real facts in the deal and learn about something that you love.

Sherron Shabazz is a freelance writer with an intense passion for Hip-Hop culture. Sherron is your quintessential Hip-Hop snob, seeking to advance the future of the culture while fondly remembering its past.
View all posts by Sherron Shabazz →
This entry was posted in interview and tagged And You Don’t Stop, Chuck D, interview, Nothing is Quick in the Desert, Prophets of Rage, Public Enemy, Radical Eyes, Rapstation, Slam Jamz, SPITdigital, This Day in Rap and Hip-Hop History. Bookmark the permalink.