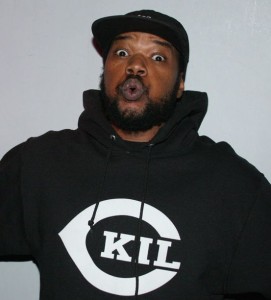 Concise Kilgore is a veteran of the underground Hip-Hop scene. The Salt Lake City emcee released his debut album, Digitails a decade ago and his sophomore album, Kobain in 2012. During that time he’s released a couple of mixtapes and rocked with some of the best rappers in the game. Concise Kilgore recently released his new album KiL Joy Division on Pink Cookies Records.

The Real Hip-Hop spoke to Concise Kilgore about the Salt Lake Hip-Hop scene, how he draws inspiration from fallen rock heroes, and his new album, KiL Joy Division.

TRHH: What exactly is the KiL Joy Division?

Concise Kilgore: This one is a little darker and stripped down. Kobain was heavy with features and guest producers. On this one I kind of scaled it back to maybe 3-or-4 producers and three guest appearances. It’s only nine tracks long.

TRHH: It’s hard to think of something being darker than something named Kobain [laughs].

TRHH: How do you draw inspiration from characters that didn’t wanna deal anymore?

Concise Kilgore: I just try to give ‘em life again. I don’t know if you’ve ever seen Joy Division perform. You’ve probably heard 3-4 of their songs before. They were really introverts. I’m like that too. I don’t really do a lot of talking, but once you get on that stage you act like it’s going to be your last time on stage. Both those guys, especially Ian Curtis, had this raw energy about them when it came to music. That’s where I draw that inspiration from.

Concise Kilgore: Griselda Blanco’s first brick, probably a little bit Of Cocaine Cowboys. Another part of that would be getting the beat from Statik Selektah in the surroundings that I did. Joey Bada$$ had a show in Salt Lake City and I worked at the radio station at the time. U92 is a Hip-Hop and R&B station. They came through and Statik played a real quick set for this thing they do called 5 O’clock Roll Out. I was like, “Yo man, I need another banger.” He said, “Cool, you coming to the show?” I said, “Yeah, I’m coming to the show.” I get to the show, go back stage, and I’m in the room with the whole Pro Era. Statik Selektah pulls up all the beats, I’m sitting there with the laptop on my lap, and I’m talking to Joey Bada$$ about meeting Madlib, MF Doom, Jay-Z, and Nas. It’s kind of both of them, Griselda Blanco and the experience of picking that beat. That being said, I just needed to let loose on the beat lyrically.

TRHH: How would you describe you style of emceeing?

Concise Kilgore: I would say a lot of imagery. A lot of influences from Kool Keith and MF Doom.

TRHH: Those are abstract kind of guys. I can see that.

Concise Kilgore: Yeah. It’s not off the wall to me but it’s off the wall to a virgin ear or listener. It totally makes sense to them when they’re writing. Doom is not straightforward but he tells these riddles in songs that he does and you’re like, “Yeah, I get it.” The same with Kool Keith. He’s super abstract with super word play – things that don’t make sense to someone who doesn’t listen to him often. If you listen you kind of get where they’re going with certain song titles and some of the lyrics that they write. I would explain that my influences are MF Doom and Kool Keith with a bunch of imagery in the words.

TRHH: When I think of Hip-Hop I never think of Salt Lake City. What is the Hip-Hop scene like there?

Concise Kilgore: It’s pretty vibrant, I guess. It’s like any small town. It would be like having Hip-Hop in Iowa, Omaha, Nebraska, Portland, Oregon, or Albuquerque, New Mexico. The scene is pretty good. You have a bunch of rappers. Some are good, some are okay, and some are real good. That some that are real good, there aren’t a lot of them but they kind of make do. There are shows every week. I just performed with Denzel Curry. There is a festival with all of Hieroglyphics, Flatbush Zombies, A$AP Twelvyy, Da$h, so it’s kind of getting bigger as the years go on.

TRHH: Will we hear another Fice Lords mixtape?

Concise Kilgore: Yes. I have that on deck as my next project which will probably be in the summer.

TRHH: Who is KiL Joy Division for?

Concise Kilgore: [Laughs] KiL Joy Division is for the dreamer. I picture people playing this record to go to sleep. When they go to bed or in the night, it’s all over the place. It’s an emcees emcee record. Even people who are not really into Hip-Hop can grasp on to a couple of songs. After a while you get familiar with it and it starts to grow on you.

Sherron Shabazz is a freelance writer with an intense passion for Hip-Hop culture. Sherron is your quintessential Hip-Hop snob, seeking to advance the future of the culture while fondly remembering its past.
View all posts by Sherron Shabazz →
This entry was posted in interview and tagged Concise Kilgore, Fice Lords, GB1B, Griselda Blanco's first Brick, interview, KiL Joy Division, Kobain, Pink Cookies Records, Salt Lake City, Utah. Bookmark the permalink.