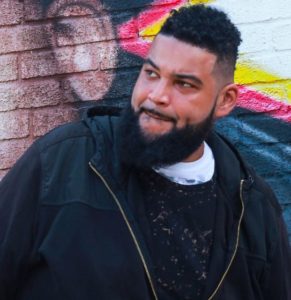 New Jersey producer/emcee Deal The Villain is back with his latest release titled, “Beards, Beats, & Kicks.” The EP is an ode to some of DTV’s favorite things and some essential elements in today’s Hip-Hop lexicon.

The project was preceded by a string of creative visuals to give fans a sneak peek into what Beards, Beats, & Kicks would encompass. Released on RTD Records, Beards, Beats, & Kicks is a nine track EP featuring Michael Cardigan with production by Flying Lotus, S1ncere, Knxwledge, and Deal The Villain himself.

Deal The Villain chatted with The Real Hip-Hop about his favorite retro sneakers, his appreciation for the late, great J Dilla, and his new EP, Beards, Beats, & Kicks.

TRHH: How’d you come up with the title for the new EP, Beards, Beats, & Kicks?

Deal The Villain: Well basically it’s about what I’m into in terms of being a sneaker head. Beards is more or less the style aesthetic in terms of what’s going on in fashion and how we present ourselves. Beats, that’s just the sonic’s that’s underneath it all. It encompasses what life is – how you walk, how you step, how you live, and your perspective.

TRHH: What was the inspiration behind the song ‘Legend Blue’?

Deal The Villain: Legend Blue was more or less encapsulating how I was born, where I matured and grew, and how I look at life moving forward. If I was born in an earlier time I would have been stillborn because I was born with the umbilical cord around my neck. Moving forward in terms of the things I’ve seen in life and in the end of where I want to leave it – I want to leave it for my family, my siblings, and if I have kids. It was a birth to death thing just as the genesis of the new project.

TRHH: You’re a producer in addition to an emcee, do you prefer producing to emceeing?

Deal The Villain: I like to more or less fit in where I get in. My first love is making beats. I actually deejayed first and moved to making beats. Of course back in the day because we love rap music, I wrote my little rhymes in elementary school, but I always drawn to the beats. In terms of what I enjoy now, in maturing as an emcee I’m flattered any time another artist will ask me to do a feature or guest because that means that I’ve worked on my craft that much and I’m respected by my peers to step in and do that. I’m just as honored when people ask me for beats or they want me to come in and produce a track. I’m just in love with the music so there really is no preference. It’s just whatever is required of me, I get to it.

TRHH: What does your production set-up consist of?

Deal The Villain: It varies. I’m a mad scientist when it comes to producing. I’ll build beats in sessions with Pro Tools, Logic, Reason, or I’ll use an MP. As of right now I’ve been using Reason a lot, dumping them into sessions to do my mix down. Whatever gives me whatever sound I’m feeling and whatever vibe I’m going for, it doesn’t matter. As long as I can get the work flow right with it I’m ready to rock.

TRHH: I know you’re a Dilla fan, and you did a J Dilla-themed project. What’s your favorite J Dilla track?

Deal The Villain: [Laughs] To say that I’m a J Dilla fan kind of understates it. However you come to know J Dilla, I’m with it. I don’t get upset with people who got with him posthumously. I was with him when he was Jay Dee, doing remixes, and doing Pharcyde tracks. That kind of shows how long I’ve been in the game [laughs]. My favorite track where I can say I totally just fell in love with what he was doing was ‘Fall in Love’ by Slum Village.

Deal The Villain: What makes me upset is that on the re-pressing because of the sample clearances it wasn’t on there. So you know you go through Slum Village and Dilla CD’s and you gotta buy it again, or you download a version and it’s not on every version! When those drums kick in and he says that “1, 2” that’s it.

TRHH: It’s a wrap. And you know what’s funny? The same song was sampled on the Jaylib album for ‘The Official.”

Deal The Villain: Official! Exactly. That’s the thing about it, Dilla would take different parts of a sample source and flip it a whole ‘nother way and it still got that knock and that bob to it. I love it!

TRHH: Yes, me too. The video for ‘Retro’ is real dope. Do you have a favorite pair of retro sneakers?

Deal The Villain: I like basketball sneakers first and foremost. A lot of people are into the runners. Nothing against them but that’s not my thing. I’m a bigger guy, so I have a bigger frame and I’ve always been into hooping shoes. My favorites are the 6’s, 7’s, and 8’s because that’s what he wore when he won his first three championships. I just love the style of those. They’re just clean and you can wear those with just about anything. Particular the 8’s because a lot of people don’t give the 8’s a lot of love. They’re like the only Jordan’s with a cross strap. I’m into those. I like being into what everybody doesn’t gravitate toward because you’re able to make it your own. Everybody loves Jordan’s, but everybody doesn’t love every J.

TRHH: Would you say you follow that philosophy musically as well?

Deal The Villain: Yeah. It’s just like I said with the sneakers, what may not be my style or what I gravitate toward, I still respect it. I still know when somebody’s catching an outfit that’s clean and they’re wearing a pair of NMD’s or Boost’s. Just ‘cause that’s not my wave, I love that. The same thing with music. Just because I may not sound authentic pulling off a certain genre or style within Hip-Hop or rap music, it doesn’t mean that I don’t care for it. I just know in terms of what I do, what I like to push myself in being progressive with. Because I pay attention to other styles it helps me cultivate my own.

TRHH: Who is Beards, Beats, & Kicks made for?

Deal The Villain: Beards, Beats & Kicks is made for everybody in this day and age. All the guys sitting there and they’re growing their beards out, whether it’s for fashion means or religious means, that’s the style. Women are loving the men with their beards. It’s just part of the aesthetic. You always gotta be clean with a nice pair of kicks when you step out. That’s part of the presentation. The music is the soundtrack to our lives when we get up and we move. So I like to feel that’s for everybody that can pick and that’s into each and every aspect of it. It’s not just about if you got a beefy beard or you rocking the hottest kicks or got a certain knock. It’s a metaphor for how you look at it and how you feel about it. Hopefully what I’m saying and what I put forth is just vibe that people connect with. Hopefully it’s for everybody.

Sherron Shabazz is a freelance writer with an intense passion for Hip-Hop culture. Sherron is your quintessential Hip-Hop snob, seeking to advance the future of the culture while fondly remembering its past.
View all posts by Sherron Shabazz →
This entry was posted in interview and tagged Beards Beats & Kicks, Deal The Villain, DTV, EP, interview, Legend Blue, New Jersey, Plainfield, Retro, RTD Records. Bookmark the permalink.