Posted on September 2, 2019 by Sherron Shabazz 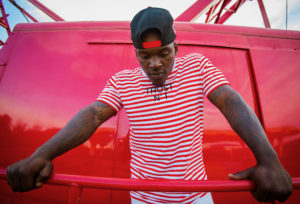 Devante Hunter has always been an expressive artist. Throughout his work you can hear the Houston emcee pouring his feelings out on each track and sharing the lessons he’s learned from his loved ones, his neighborhood, and his city. Hunter has taken his artistry to an even higher level with a passionate piece of work called, “Omit the Logic.”

Omit the Logic is a 14- track album released by Hunter’s collective and imprint of the same name, Indigo Klan. The album is produced by Lix1000, Killa Tex, and Risko Funk and features guest verses by fellow Houstonian, Anti-Lilly.

The Real Hip-Hop spoke to Devante Hunter about the struggles of trying to make it in Houston’s Hip-Hop scene, expanding his creativity beyond the microphone, and his new album, Omit the Logic.

TRHH: Why’d you call the new album Omit the Logic?

Devante Hunter: I got that from a Richard Pryor documentary, believe it or not. Omit the Logic, the Richard Pryor documentary resonated with me. A lot of people knew Richard Pryor as a comedian. They knew him based on the things we’ve seen in him. They saw his troubles; his drug addiction and mental problems, but it was based off of how great of a person he was. Besides him being a creator, he was an innovator. Everybody during the whole documentary process would say, “In order to understand Richard you had to take the logic out of everything, because he’s not thinking on the same frequency as you. Once you understand the development of removing the logic out of the situation when you talk to him, that’s when you’ll become his best friend.” I’m the same way. I don’t purposely think on a different frequency. I don’t purposely think it’s hard to reason with me or anything like that, but I do feel when people talk to me different, I think a little bit different. If you take out the absolutely logical thinking you’ll understand what I’m saying and you’ll get to like me more and understand me more.

TRHH: You’re a young guy, were you always a Pryor fan?

Devante Hunter: Aw yeah, my entire life. That’s the thing, I love entertainment. I always looked up to people like him, even being younger. I always looked up to people like him, Martin Lawrence, Eddie Murphy, Eddie Griffin, and people like that. I even look up to the newer generation like Mike Epps and Kevin Hart. It all goes hand in hand. When those comedians are on stage they come up there with their conviction. They come up there telling stories and are making jokes out of their pain. I understood that at a young age. A lot of comedians turn their pain into jokes. When you get off that stage everything completely changes. The same thing with Robin Williams; he was a great comedian, but they say entertaining was the thing that kept him alive so long. When he wasn’t making movies and doing Saturday Night Live, most of the time he didn’t want to be alive. I always was attached to Richard Pryor even being a kid watching his movies and everything.

TRHH: You refer to gangs throughout Omit the Logic and I didn’t even know Houston had gangs like that. What’s the gang situation like in H-Town?

Devante Hunter: The gang situation is more like neighborhoods. In places like L.A. you might have a gang on one street and two streets down a rival gang is on that street. They understand their borderlines and how far to go. In Houston you might have a situation where we grew up in a neighborhood with a lot of Bloods. That’s our surroundings, that’s what we knew, that’s how we came up, but Houston is so spread out that 10-15-20 minutes away that neighborhood is a Crip set. Your chances of running into each other ain’t slim, but you’re going to run into each other at the mall, at the movies, or at the club. You don’t really hear about gangs in Houston killing each other in neighborhoods. You hear about gangs running into each other at events. That’s how the situation is here in Houston, but gangs do exist.

TRHH: Round of Applause is a song that stands out from the album. It seems like you didn’t stop for a breath. Why did you decide to spit straight through without a hook?

Devante Hunter: Because I wanted people to understand being fed up and being from Houston. Actually, I wanted people to know Im’ma run this! I want you to know Im’ma run this and if you step in the way Im’ma run you too. If you read between the lines and listen, especially if you’re from Houston and know the circumstances, they had a situation here where they did a contest and I made it to the radio station out of thousands of people. It was a biased thing. By me being from Texas and having a different sound it’s hard to fit in, it’s hard to mesh, and it’s hard to grow.

There was a time where I had to move to Los Angeles for a few years to grow. I was short changed. The whole city wanted me to be the winner of the competition and the face of the city, but I was short changed based off of the high level of competition that I’m bringing to the table. So, when you read between the lines when I say, “I was up at 97-9 spazzing, killing shit/I was starving, but you know how they do, cut your neck when you’re a threat.” It all makes sense. I wanted those people to know, you pulled the chair from under me, but this how Im’ma run it. I’ll catch up with you later.

Devante Hunter: I’m not going to say it’s a certain person that’s preventing me. It’s like anything that has to do with entertainment or business, it’s always the powers that be. Especially when you’re from a place that has a set culture. We have a chance to bring some evolution to the culture in Houston. It’s so many different great artists out here, but you never really get a chance to hear them. If you hear them, you hear them when they go somewhere else like New York, California, or Atlanta. You never get a chance to hear them solely saying, “I came up in the scene just like this. I came up bustin’. I came up being a dope songwriter.” But no, you gotta follow the culture.

I love my city. I do everything I do for my city. I want the outside world to understand it’s more than drank. I want to go by Pimp C’s vision. I want the world to see what we have to offer. It’s more than swangas, it’s more than candy paint, and it’s more than what people introduced y’all to in 2005. It’s a hypebeast culture and I feel like the majority of the people here are stuck in that culture. If you can’t break through from that leash in Houston you’re going to be stuck. It’s not a specific person, it’s just the powers that be. The powers that be is just the strength of the culture and what people believe in, in the city.

TRHH: Would you ever consider moving again?

Devante Hunter: Aw, of course. One thing I tell people, all my life people always question where I’m from. They’re like, “Where you from? You from Los Angeles?” I’m like, “Naw.” I loved the California lifestyle ever since I was a kid from Boyz n the Hood, Menace II Society, shit, I got “N.W.A” tattooed on my arm when I was thirteen years old. N.W.A was one of my very first tattoos. The Game was one of my favorite rappers growing up. Nipsey Hussle was one of my favorite rappers in my early 20s. Nipsey Hussle is actually the first person I’ve seen perform live at House of Blues in Houston when I was 21-years old. I always had that thing where L.A. was my vibe. When I moved out to L.A. a lot of people asked me where I was from. They would have a conversation with me thinking I’m from L.A., and you would never know until you hear me say something that sounded like I was from Houston. Of course, for entertainment purposes I’d move again, just like I did the first time. That’s my dream. My whole goal is when I make this, and in the most humble way I know I will, once I can solidify myself in the industry, my home will be Los Angeles.

TRHH: Who came up with the concept for the Omit the Logic film series?

Devante Hunter: Me. That’s just one of my things. I always tell people I’m always open to wear more than one hat. I don’t want to be known as just this rapper. I don’t want to just be known as this black dude that raps. I love film. Like I said before, I love entertainment, and I love all forms of entertainment. I released an album in 2014 called “Patiently Waiting” and in the process I had the idea to shoot trailers based off of me patiently waiting in life. My car broke down, I was patiently waiting for a tow truck. I went shopping in the grocery store and I was patiently waiting in the long ass line at the grocery store. It was the first time I ever did it. I bought a camera myself and I used to shoot me and my brother Anti-Lilly’s videos. I always had that knack for film. It was just me sitting down one day and having a thought, “What can I do for a promotional tool for this album?” and I just came up with that.

Devante Hunter: Indigo Klan is a beautiful thing. It’s a collective. It’s odd that it happened this way because in Houston you don’t even have to be in a gang, but we represent sides of town. I’m from the north side of Houston, Anti-Lilly is from the east side, and Preach is from the southwest side of Houston. We call come from different sides of town. It’s literally like, a modern-day Westside Connection, but we all sound completely different. We also sound cohesive. Nobody is in anybody’s lane or in anybody’s way. That color indigo is also a different color on the color grid. That’s the way we stand out. We’re just a collective of artists.

So far, it’s just three of us, and we’re more than artists, we’re friends. We all think different so everything we do is always different. Even among us we think different. So, when we bring stuff to the table one song might sound like what this person sounds like, another song might sound like what this other person sounds like, so it’s a cohesiveness of artists, brothers, and friends just trying to do whatever we can to come up. If I do a show Im’ma bring Preach and Lilly. If Lilly do a show he’s going to bring me and Preach, and for Preach it’s the same way. We’re going to do whatever we can for each other to give each other a platform to be seen on as many stages as we can.

TRHH: Who is Omit the Logic made for?

Sherron Shabazz is a freelance writer with an intense passion for Hip-Hop culture. Sherron is your quintessential Hip-Hop snob, seeking to advance the future of the culture while fondly remembering its past.
View all posts by Sherron Shabazz →
This entry was posted in interview and tagged Anti-Lilly, Be Like That, Devante Hunter, Envy Hunter, Houston, Indigo Klan, interview, Lix1000, Me Against the World, Omit the Logic, Round of Applause, Texas. Bookmark the permalink.