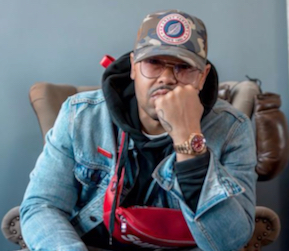 One half of the Toronto-based rap group Falconcrest, DNTE, has released his first solo album, “Crystal Pianos.” The 15-track project, released on the groups High Heat Records, is a celebration of the sophisticated hustler. The album’s sound and its title are lush, luxurious, and all about living the good life.

The Real Hip-Hop spoke to DNTE about why it’s hard for some hustlers to walk away from the streets, the types of artists he wants for his High Heat Record label, and his new album, Crystal Pianos.

DNTE: I just liked the name, man. There was an Olympics that happened in Beijing and they had this crystal piano there. I thought that shit looked so fucking ill. The piano was iced out with diamonds. It looked sick. I ended up calling it Crystal Pianos, plus there’s a metaphor to it that I can’t really talk about right now.

TRHH: How was doing this album different from doing a Falconcrest project?

DNTE: It kind of still is a Falconcrest project. I still got my partner there with me. I got my protégé Wyze Wonda with me. I just wanted to do things on my own. I picked my own beats. I’ve been doing this shit for two years trying to prepare this album.

TRHH: You produced the single ‘MK Ultra’ and the song has a different sound from everything that’s out right now. The tempo, the sample, your flow, it’s all very different. How did that joint come together?

DNTE: I’m working on this Maschine and I’m just kind of messing with it. I want to hear different music from the norm shit that we always hear. I want to hear some weird, alien, spaceship shit. Plus I have a reggae influence too, because I’m Jamaican. I ended up catching the drums and I found this weird sound that I made up. I knew that was it. I ended up recording it and I didn’t know that shit was going to sound dope, but it sounded dope to me. I recorded it and said, “This is the one!” I ended up putting it out just to see what kind of feedback we would get.

TRHH: You mentioned, Maschine; what does your entire production workstation consist of?

DNTE: Just Maschine, man. I hit those key pads and that’s it. I bring it to the studio and end up fixing it up from there. I just started producing maybe three years ago.

TRHH: How much of your music is sampled?

DNTE: Everything is sampled, man. I like the soulful sampled loops. On the album I got Statik Selektah, Camoflauge Monk, DirtyDiggs, TheRealSkitso, Nicholas Craven, and Futurewave. I told them, “Give me the soulful loops,” and they blessed me with it.

DNTE: My pops had a lot of records. Back in the day he used to play a lot of Al Green, Temptations, and Aretha Franklin, so I grew up on that soulful music. I grew up on that music and reggae music, so I’m trying to combine the two together and see what type of sound I can get.

TRHH: Did you not grow up on Hip-Hop?

DNTE: Of course, I grew up on Hip-Hop. I grew up on Big Daddy Kane, Kool G Rap, the Juice Crew, and Rakim. Back in ’88 one of my cousins came down and he brought me this Big Daddy Kane album. I was like, “Yo, what is this?” and I just fell in love with it from there.

TRHH: The song ‘Washing Machine’ is really hard. Why do you think more people who hustle don’t move on to legitimate businesses?

TRHH: It’s a different kind of danger, though.

DNTE: It is a different kind of danger, but a lot of people don’t want to turn legit. I know some people that are like, “DNTE, I can’t work. I can’t run a business. I gotta do this shit for life.” I’m like, “That’s crazy. You got kids and shit. Why don’t you turn your money legit?” and they’re like, “Nah, man. I like the hustle.” They just love it. They’re addicted to it. Some people are addicted to the streets.

TRHH: What does an artist need to have to get signed by High Heat Records?

DNTE: Talent. And motivation. They gotta be motivated. I had some other artists that were with us and they weren’t really motivated. I had to hound them down and get them to the studio. They wanted to smoke weed all day. I can’t do that shit, man. You’re messing up my money. You gotta have talent and motivation and you gotta want it, too. You gotta invest into yourself, too. A lot of people don’t want to invest into themselves.

DNTE: If you have a talent wouldn’t you want to invest into yourself? That would be like a waste of talent. You gotta go get it.

TRHH: Why do you think those particular artists didn’t want it bad enough?

DNTE: I don’t know. There are some people that just don’t want it. Some people are just lazy. They just want to sit there and think everything is going to come to them. It’s not. You have to knock on doors. You can’t just sit there and be like, “Okay, I’m the illest emcee, I’m the illest artist, I’m just going to put something out and everyone is going to love it.” Nah, you have to go out and get the people to love your music, no? A lot of people just don’t want to push themselves. You have to have a strong mental state of mind to put out your music and get whatever you want.

TRHH: Who is Crystal Pianos made for?

Sherron Shabazz is a freelance writer with an intense passion for Hip-Hop culture. Sherron is your quintessential Hip-Hop snob, seeking to advance the future of the culture while fondly remembering its past.
View all posts by Sherron Shabazz →
This entry was posted in interview and tagged Canada, Crystal Pianos, DNTE, Falconcrest, High Heat Records, interview, MK Ultra, Ontario, Toronto, Washing Machine. Bookmark the permalink.