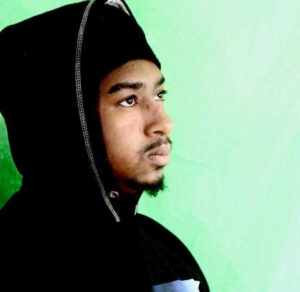 A road trip on I-95 N led to the creation of Baltimore emcee Dskillz Harris’ full-length release, “Westport & Beyond.” Dskillz collaborated with fellow artists in Westport, Massachusetts and New York City, respectively, to create an 11-track album that blends boom bap and trap.

The Real Hip-Hop chatted with Dskillz Harris about his plans after graduating from college, not wanting to be pigeonholed by boom bap, and his album, Westport & Beyond.

TRHH: Explain the title of the new album, Westport & Beyond.

Dskillz Harris: In early June, myself and Lil Webb went from Baltimore to Westport, Massachusetts and we recorded music for like a week. I want to say we spent about 4 or 5 days in Westport and then on the last day we went to New York to visit Davon Quill, aka, D.M.D. We had other people come to the Airbnb, too, like Bloccboi Dutchman and Chunk Radical. It’s a lot of underground dudes from Massachusetts and they’re killing it, for real. We were just all feeding off each other’s energy and making tracks. Most of the tracks that you hear on this album were made while I was gone for that time.

TRHH: So, you went to Massachusetts solely to make music?

TRHH: How long is that drive?

Dskillz Harris: [Laughs] I want to say it was five hours.

TRHH: That’s not bad. On Westport & Beyond you rhymed over a few trap-type beats. Why did you decide to switch things up musically for this album?

Dskillz Harris: I just wanted to show more versatility and showcase that I feel like I can rap on any type of beat. I’m not just going to jump on a beat just because. I really gotta feel it in order to jump on it. one of the main things that we were really trying to do in going to Westport was stepping out, and not just stepping out of our zones geographically, but creatively. We were just trying different things and it came out well. Some people really aren’t messing with the Auto-Tune, but it’s all good. I feel you, because I usually don’t do that. A lot of listeners were caught off guard. They didn’t think that it took much from the song, but some people aren’t really messing with it. I’m known for more low-fi, boom bap, and you hear my voice.

TRHH: That’s not really my style either, but I’m a lot older. I liked that it was different though. It was like a curveball. It wasn’t the same sound.

Dskillz Harris: Right. I wanted to switch it up. I don’t like when things are predictable, unless it’s intentional. Like, when you’re setting up a scheme you should be able to understand them, but I wanted to invoke thought, too. I don’t want to be put in a box. I’m always going to be a hardcore rapper – a real emcee – a master of moving crowds. I grew up on vintage Hip-Hop as well as early 2000’s G-Unit and Dipset era. I also studied those who came before me, too. I don’t want to be put in one box where people are going to always think it’s boom bap. Just know it’s always going to be bars. Lyricism is very important. I think beat choice is very important, too, but I always like to switch it up. So, you never know what you’re going to get, you just know it’s going to be dope. That’s how I want it to come off, for real.

TRHH: On the song “OMG” you have a line where you say, “I extended hands to brothers who’d rather throw ‘em.” Is that in reference to the Hip-Hop scene in Baltimore?

Dskillz Harris: That was in reference to a specific situation. There is not much of a divide, but you’ve got people who are on the scene and people who are opposed to it. Not really opposed to it, but you know how you’ve got the in crowd and the out crowd, and sometimes you’ve got the in between. I see how you could have thought that. That was about a true to life situation outside of music, but I see how you could have thought that.

TRHH: On the song “Njlm” you say a lot of deep stuff, but one line that stood out was, “They want us to forget our enemies.” What did you mean by that line?

Dskillz Harris: They want us to be fighting. One, they want us to fight each other. They give us the tools to destroy ourselves as far as access to guns and liquor. I can’t speak on every city, but in my city, there is as liquor store on every third corner. It’s nothing wrong with that if you’re drinking responsibly, but I believe they place a lot of those in certain areas. There’s a reason why certain areas are full of Starbucks’ and other areas are full of liquor stores. As far as our enemy, racism is a very big issue and has always been a very big issue here in this country. I’m talking about class warfare, too. I’m talking about uneven distributions of funds. I’m from Baltimore, Maryland and Maryland is one of the richest states in the country, but has some of the worst poverty in the country. That doesn’t make any sense to me.

TRHH: Well, it doesn’t make sense. It’s typical. Wherever there is a large number of black people, funds appear to be unevenly distributed. Maybe they’ll fix that one day and you’ll see a drastic change in a lot of communities.

TRHH: What’s your favorite song on Westport & Beyond?

Dskillz Harris: I don’t even think I have one. I think I like each of them for different reasons. If we’re going in order, I like “Hiii Science” because originally Versatile K wasn’t supposed to be on it. He decided to put his verse on it and I looped it after D.N.D. sent it to me. He added another dimension to it. It’s a good track, but it’s just to get you warmed up. I feel like it transitions perfectly into “Sam Cassell.” Shout out Black Ear$. He’s a producer from France and he made the beat for that. I don’t really have a favorite. I really don’t. Probably Sam Cassell or Sunday. Those are definite, raw, underground tracks. The main genre I listen to is underground Hip-Hop. I feel like those are the most bar heavy on the album.

TRHH: 2020 has been a bad year for a lot of people, but you had a bright spot by graduating from college this year. What did it feel like to get that degree, man?

Dskillz Harris: Thank you. I was very glad that I finished, I graduated, and I graduated in a great major. I felt great. I was just glad, and seeing that smile on my mother’s face meant everything to me.

TRHH: How do you plan to use that degree?

Dskillz Harris: I just got back from New York. This was my first time performing in New York. We had a show in Bushwick. It went very well. A lot of other dope artists performed there, too. Shout out Snick Foley, this nasty emcee from Queens. I have a tape with D.P. Infinite and Miclopedia and that’s called “We Are Not The Same.” Versatile K is working on his tape. I have so many collab projects. Me and Webb made our own tape while we were gone at Westport. It’s so many projects. The Next Episode is the one that I’m the most excited about. That’s me and Chilly Madison, the same guy that produced one of my other albums, “The 6 Day Theory.” He’s doing production and we’re dropping the sequel to The 6 Day Theory and it’s called “The Next Episode.” That’s going to be a 2-part series and it’s very dope. If you like my more underground stuff, this is for you. This feels like Liquid Swords, I’m trying to tell you.

Sherron Shabazz is a freelance writer with an intense passion for Hip-Hop culture. Sherron is your quintessential Hip-Hop snob, seeking to advance the future of the culture while fondly remembering its past.
View all posts by Sherron Shabazz →
This entry was posted in interview and tagged Avant Garde Music, Baltimore, Down by Law, Dskillz Harris, interview, Maryland, Njlm, Omg, Sam Cassell, The Next Episode, We Are Not The Same, Westport & Beyond. Bookmark the permalink.