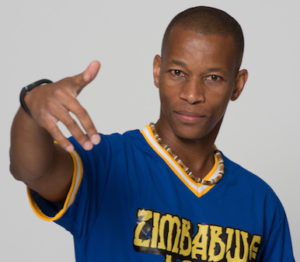 Dumi Right has spent the last few years working on music in addition to teaching Hip-Hop to children in Thailand via the State Department’s Next Level cultural exchange program. One half of the duo Zimbabwe Legit, Dumi Right has traveled the globe for over a quarter of a century spreading his brand of positive Hip-Hop. Dumi recently released his long-awaited sophomore solo album appropriately titled, “Doing it the Right Way.”

The Real Hip-Hop spoke to Dumi Right about his start in Hip-Hop with Zimbabwe Legit, his work with Next Level in Thailand, and his new album, Doing it the Right Way.

TRHH: Why’d you call the new album “Doing it the Right Way”?

Dumi Right: I was really just trying to figure out how to encompass this creation that I’ve been working on. I just kind of wondered what is the driving force behind what I came up with and what was keeping me going? It’s kind of like quoting Frank Sinatra, “I did it my way.” In this case “my way” is a play on the “Right” in my name. Also, just talking about from a standpoint of not wanting to compromise as an artist and not wanting to try to play into whatever is hot, popular, and follow trends. I do what I do best. I can only be my best self so that was the inspiration for the title.

TRHH: Doing it the Right Way has a lot of guest appearances; how long did it take you to complete the album?

Dumi Right: Most of it probably was completed in 18 months. There are some tracks that have been kind of in the works for probably like two years in large part because of tracking folks down, getting tracks together, re-working ideas, and also wanting to put together the best material. There’s other material that I did during that time frame that I put to the side or didn’t want to include on the album just because it didn’t quite fit in with the rest of the work on the project. It always takes a while just being an artist and having that perfectionist streak you always want everything to sound right and gel.

TRHH: How have you grown as an artist since the beginning of Zimbabwe Legit?

Dumi Right: I think a big part of it is knowing a lot more how the music ends up going from conception until it’s consumed. I think in the beginning we were just making music because we loved music. We figured there would be people that were experts on getting it out so people could hear it. Being independent you have to do all of that on our own. When creating the music you have to be a little more mindful on what you’re trying to say and who you’re trying to reach. I’m definitely a lot more thoughtful on the creative process. I’m not saying I’m pandering to an audience, but I’m thinking about who listens to the kind of music that I make and what do I have to say to them that would resonate with what they’re thinking and feeling. I think there’s been a lot of growth there and maturity. With a label they can put it out and figure all that stuff out on the back end.

TRHH: Was there an initial resistance to your group because you were African?

Dumi Right: It’s kind of like two-sided. I think on one hand we got embraced from the progressive and conscious circles in music. At that time there was a lot of Afrocentric talk in Hip-Hop. It was the late 80s into early 90s when we came out. I remember meeting folks like the X Clan, and running into Busta Rhymes at Elektra Records and then again at a club and he was dapping us up and saying, “My brothers from the mother! That’s fresh!” I think in terms of the music industry they weren’t sure what box we fit in in terms of category. We went to Tower Records on Broadway in New York City to see our album in the store and we couldn’t find it. We asked where it was and they said, “It’s in the World Music section.” It’s not really international – it’s a Hip-Hop record. People that listen to Hip-Hop should be able to find it. We had a lot of stuff like that where people who curate music, play music, or broadcast music wondered where we fit exactly. “They’re Africans, but it’s Hip-Hop. Is it World Music?” We were straight up Hip-Hop coming with it from an African perspective.

TRHH: How did you get involved with Next Level?

Dumi Right: A friend of mine, DJ Plain View heard about the program. He’s somebody that I worked with on a lot of community projects. Me and him met and had been collaborating on fundraising and awareness events where we link up with grassroots organizations. In the Washington D.C. area there are a lot of international development organizations. We would come across people that were doing stuff that was below the radar and not with major funding. I thought it would be cool to get like-minded people together, people that like music and Hip-Hop, and also are into international development and sustainability to network and raise awareness.

We did a whole bunch of those for a couple of years and then he heard about Next Level. He was like, “Yo, I heard about this program where they’re doing Hip-Hop cultural exchanges. You should look into it.” I didn’t have a chance to apply the first year they did it, but he did it. After he did his trip he was like, “Yo, I’m telling you! They’re going to do it again next year. You gotta apply!” I looked into background and criteria that they were looking for it and it was definitely a good fit. They were looking for stuff that I was already doing in terms of working in workshops, teaching Hip-Hop, working with youth, and communicating and doing cross-cultural things. I applied and got accepted to the program. I had an opportunity to go and do a residency in Thailand and that was really exciting stuff.

TRHH: How much experience did the young people in Thailand have with Hip-Hop when you got there?

Dumi Right: That’s a really good question. They deliberately with Next Level try to go to under-served areas. When we were in Bangkok somebody at the U.S. Embassy said that some big artist had just been there, but the areas we were in were Surat Thani in the south and Chiang Mai in the north. They had some exposure to Hip-Hop but not a lot of day-to-day knowledge of the history of Hip-Hop. They kind of knew what they knew from things that have kind of seeped in and from the radio. A lot of the music that they were exposed to was more pop music. In terms of practicing Hip-Hop I had ten to fourteen kids in my first emceeing class and none of them had been emcees. I think I had two people that had kind of written some rhymes just kind of playing around. Everyone else was like, “I’m new to rap. I like it. I’m interested, but I’ve never done it before.”

TRHH: What did you learn about yourself during your time there?

Dumi Right: I think one of the things that I learned was to trust my instincts. Going over there they kind of prepare you with orientation, but you never know what the makeup of the class is going to be. I was writing plans but wondering, “What if it doesn’t go according to plan and we have to change? How are we going to be received?” You’re nervous. You’re going across the world to these folks that you have to connect with, and at the end of it you have to come together with them to put forth a work of art as the outcome of that session. Since we went to two places we had a really short time. I think it was good that we went through the process. Even knowing that it was going to be unpredictable a lot of things that I had in my toolbox resonated with them even though we had a bit of a language barrier and were culturally from two different places.

We were meeting up through this vehicle of Hip-Hop and kind of rocking. It was like, “Yeah man, trust your instincts. You kind of know what brought you to the culture.” That’s what I was banking on. The things that got me excited would also get them excited, but I wasn’t sure how it would go up until we started the classes. It was really successful. With the language barrier with the first place we were at, not everyone in the class was fluent in English. We had a DJ class, a b-boy class, a production class, and then an emceeing class. In all those classes the one where you have to communicate the most with words is the emceeing class. You can demonstrate a breaking or popping move, you can demonstrate deejaying, but with emceeing you have to speak, communicate and understand each other. It ended up working out well.

TRHH: What do you hope to achieve with “Doing it the Right Way”?

Dumi Right: I just want to kind of communicate my perspective of the world. I still want to carry the banner for global Hip-Hop. I think one of the greatest things for me is seeing how Hip-Hop has evolved on an international scale from when we were trying to get our thing in action before we came out with Zimbabwe Legit, then after the internet, mass communication, social media, and the things that people can do. I just want to continue to make my mark and share what I consider to be a real keen perspective having been around and having the privilege to be around all this time. And just let people know what’s really happening as opposed to rapping about some stuff that I don’t really know about. It’s extremely personal and extremely me — it’s who I am. I’m just trying to convey that, keep carrying the banner for global Hip-Hop, and keep carrying to the banner for good music in general as well.

Sherron Shabazz is a freelance writer with an intense passion for Hip-Hop culture. Sherron is your quintessential Hip-Hop snob, seeking to advance the future of the culture while fondly remembering its past.
View all posts by Sherron Shabazz →
This entry was posted in interview and tagged Doing it the Right Way, Dumi Right, Great Mindz, interview, Next Level, Zimbabwe Legit. Bookmark the permalink.