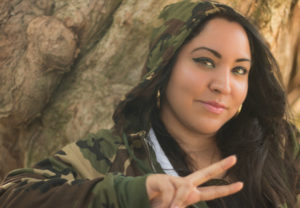 In support of Young World E-Turn is embarking on a North American tour that kicks off on August 8, 2019 in Winter Haven, Florida and winds up on October 13 in Seattle, Washington. The tour will make stops in New York, Toronto, Chicago, Atlanta, Los Angeles, and Dallas among other cities. Joining E-Turn on the 2-month long tour is producer/singer/emcee Lisa Vazquez.

TRHH: You dropped an album last year called Young World, what’s the meaning behind that title?

E-Turn: I feel like it’s gained multiple meanings. One meaning that comes to my head first off is, Hip-Hop as a culture is still pretty young and in my opinion in certain ways it’s taken a turn for the worst, and that’s not what Hip-Hop was built off of. One of the main things Hip-Hop was built off of was trying to eliminate gang violence and give people who are having to go through things that could put them in jail or end up in death an outlet to express themselves. The principles of Hip-Hop are peace, love, unity, and having fun. I feel like we’ve steered away from that and have more focused on it as a genre of music and not really remembered the culture. I feel like a lot of people nowadays don’t really realize Hip-Hop is a culture.

Young World means Hip-Hop is still very young as a culture, but we have a lot of room for growth right now. To give the analogy, it’s kind of like a kid needs to grow up a little bit because we’ve steered away from where we need to go with it. Civilization is young as a whole. We have a lot of growth we can do as a whole, not just Hip-Hop, but civilization as a whole. If you look at the artwork of the album it represents how sometimes for me a little bit of my innocence is lurking there but it’s almost gone and I’m surrounded by a lot of stuff that’s not good. That’s the post-apocalyptic alien scene on the cover. There’s a little bit of innocence left and the balloon is the little gleam of hope.

TRHH: Your first two projects were with DJ SPS; what led to you going solo?

E-Turn: Well, he actually got an opportunity to tour with a group called Black Violin. We were trying to make it keep working, but they were just touring all the time. He just had to be gone all the time with that opportunity, so that’s what led to it. He did the audition with them right before we dropped the second release, ESP. They chose him and it was a big opportunity for him. We were still going to tour for ESP, but the dates ended up not working out. I ended up having to do my touring for ESP with another DJ, which kind of sucked. After that I just started working on another album. Since he was going to be touring with them I had to do my own thing.

TRHH: How did you end up working with the Fake Four Inc. label?

E-Turn: The connection mainly happened through Swamburger, who produced all three of my full-length releases. In the underground Hip-Hop world everybody starts to know each other. If you’re traveling, if you’re doing a little bit of touring, or even if you’re not, when these cats are coming to your city you start to know these people. I met Ceschi back in 2011 or 12 when he came to Orlando and I believe Swam booked him. That was when I first saw him perform. I was with my brother and we were both blown away. He came down a couple of times and saw me perform and then a few years ago he invited Second Sub, which is my crew of dope artists that’s based in Orlando, on stage at one of his shows. We went up there and crushed it together.

He knew who I was and all of a sudden Swam started to realize that I was needing more than just Second Sub. He reached out to Ceschi like, “Yo, I got this artist E-Turn. Please help her. She does her thing, she can hold her own, she’s quite developed, but she needs something bigger to back her.” He kind of pitched me being a Fake Four artist. At first it was just supposed to be a distribution deal, but then we made it so I’m actually a Fake Four artist now. The first release, Young World, came out in September and here we are. Ceschi and I knew each other from the scene and doing a couple of shows together, but now it’s more like a family thing.

TRHH: The single ‘Nowadays’ talks about current Hip-Hop; how do you write a song like that without coming off condescending to the listener?

E-Turn: Does that mean that it doesn’t come off condescending [laughs]?

TRHH: [Laughs] I don’t think so. Was that the goal?

E-Turn: Yeah, that’s my goal. I don’t want to sound preachy. It’s crazy because that song has a KRS sample and he’s the teacha, so you almost allow him to be preachy. He’s KRS and he’s so commanding and strong. I think that’s one of the reasons that some people don’t like KRS. I’ve heard people say he’s too preachy. It’s funny you asked that because KRS is in that and in the video. I have thought about that and as I’ve grown as an artist I’ve learned how to tone it down a little bit. It’s not only in my music, but it’s the path of who I am that helps that. I have to kind of embody what I’m trying to be in my music with the person I am in real life.

I think getting a little older and growing as a person has helped me to kind of tone the preachiness down a little bit. I also don’t try to put barriers on my art, so if it’s real, it’s coming from my heart, and it sounds preachy, then I’m sorry. I’m not going to put a whole album out that’s straight preachiness. That’s a hard question to answer, I guess. I guess I’d say the overall answer would be trying to grow as a person and not be that person in real life helps me to pass that on into my music. And I’m aware of it. Obviously, I want young people to listen to my music and if I sound preachy I don’t know if that’ll do, so I try to find a balance between the two.

TRHH: On the song ‘Listen’ you kind of talk about your struggles in life and in Hip-Hop. What inspired that song?

E-Turn: It was kind of an on the spot thing. There were a few tracks toward the end where we were getting close to a deadline. I was honestly desperate to get the album done, but still trying to create good music. I didn’t want to have six great songs and the rest of them are just not even feeling it. Swam came over to work on that. I was going through a little bit of a creative block. I was getting in my head because of the due date and all of that. It was my first record with Fake Four and I was freaking out like, “This has to be amazing!”

There were a few times where Swam just brought all of his equipment over and started making a beat – that happened with a few of the tracks and Listen was one of them. He was searching for the samples and was like, “It has to be epic. It has to be classic!” For him he feels like that’s his Illmatic track. Like, “This could have been on Illmatic!” He was in the mind state of trying to make something that sounded classic. It started with the beat, of course, and I just started writing to it and that’s what came out.

TRHH: You’re about to hit the road with Lisa Vasquez on the Run the Map tour. What do you have in-store for fans that come and see the show?

E-Turn: Oh wow, first of all, as you know both of us are women in the game, so you’re going to have a lot of girl power there. I’m bringing the rap, I’m bringing the singing – I got chops. I rap fast and I’m really into the technical aspect of rap as well as bringing substance into the building. Lisa sings, raps, and also produces. She does live stuff on her machine. You’re going to see a producer going in on her machine and you’re going to see both of us singing and rapping, getting real technical with it, and also one of the more important things, bringing substance to the table. This tour is about creating the standard for women in Hip-Hop.

We’re trying to lift the standard for women in Hip-Hop, because I believe as time has gone by, and this is one of the things I was talking about that has been detrimental to Hip-Hop, we used to have more of a style of MC Lyte and Queen Latifah and these women that didn’t have to expose their bodies or objectify themselves just to be dope. They were dope! Now I feel like it’s come to the climate where as long as you’re pretty and willing to expose yourself, as long as you’re alright it’s cool because you’re a girl. Like, “Ooh, that girl raps and that’s cool.” I don’t want that in Hip-Hop. I want to be just as dope as the men, if not doper. We need to lift the standard in Hip-Hop and a lot of what this tour is about is lifting the standard for women in Hip-Hop and bringing substance.

TRHH: When will we hear new E-Turn music?

E-Turn: I’m working on a bunch of features right now. Hopefully you’ll be hearing my stuff on a bunch of different records that are coming out in the somewhat near future. Since I’m really in the midst of this tour I’m not really focusing on my own music. You’re catching me at a time where I’m like, “Come on E, you need to schedule time to make music.” I need to start working on a new album. I got a few different producers working on some beats, so hopefully in the near future I will start recording some new stuff. Definitely I’m still trying to push Young World. I’m going to be touring with it at least over the next year. I did the Euro tour, I did a U.S. tour when it first came out, we’re doing the Run the Map tour, and I’ll probably do another Euro tour with it. I can’t tell you when yet, but hopefully by next year. Hopefully I’ll get some singles out by this year – just new random songs.

Sherron Shabazz is a freelance writer with an intense passion for Hip-Hop culture. Sherron is your quintessential Hip-Hop snob, seeking to advance the future of the culture while fondly remembering its past.
View all posts by Sherron Shabazz →
This entry was posted in interview and tagged E-Turn, Fake Four Inc., Florida, Listen, Nowadays, Orlando, Run the Map tour, Second Subject, Swamburger, Young World. Bookmark the permalink.