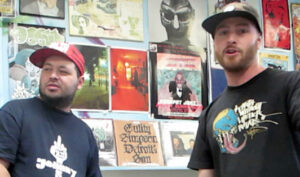 Ten years after the creation of their first release Freestyle Cologne is back with their sophomore album, “L’eau De Guts.” Emcees Boxguts and LoDeck invited friend/producer/DJ ReddRokk to join Freestyle Cologne this go around to provide his talent and expertise to the group’s dynamic.

The Real Hip Hop spoke to LoDeck and Boxguts of Freestyle Cologne about their group’s hiatus, their love for writing, and their new album, L’eau De Guts.

TRHH: What’s the meaning behind the title of the album, L’eau De Guts?

LoDeck: It’s like both of our names, I guess, but in French and fancy.

LoDeck: They’re always making cologne making it seem like we want to smell fresh, so, that’s how we flipped it.

TRHH: That’s all right though. Speaking of smelling, how is this album different from your first album, Because You Stink?

LoDeck: The first one we just threw on the microphone, took a couple of shots, and tried to rhyme as hard as we can about something that was super obscure that nobody rhymed about. It was just us messing around. This time around, we brought DJ ReddRokk on board and we decided to approach it more like an actual album. The first one wasn’t really an album to me. It was fun. It was fun to make, but it’s just like a concept and us having fun. This one was still having fun, but we kind of tightened up our songwriting, structure, and decided to really showcase how our chemistry works and how we flow off of each other.

Boxguts: I’d say the biggest difference is the mixtape mindset on the first one. They weren’t original beats in a sense that other artists hadn’t used them on Because You Stink. It was exactly like Deck said, drinking, having fun, and spitting whatever at the moment.

LoDeck: Yeah, I broke my laptop on the first one. I don’t even know how that could even happen. We were taking a shot and I slammed the bottle on the floor and it splashed up onto the monitor and the screen was blurred ever since. I broke it with a vodka splash.

LoDeck: It was a mess.

Boxguts: We recorded all the tracks together. That’s the other biggest one. We were always in the same spot, probably writing that day and recording right after the verses came to us. This one was much more meditated. Maybe one verse would be sitting on a beat for a week and kind of getting the snowball back and forth like that, where we had the leisure of doing other things when we record like that. With him being in Vegas and me being in Vermont we could take a little more time and really build it up like an album.

LoDeck: This is actually the first time we’ve seen each other. We didn’t see each other the whole time we were making the album.

Boxguts: Even longer too. I think the last time we saw each other was four years ago when you came out to Brooklyn.

LoDeck: It may be more. We could still pick off of each other’s flows and build. With this album, we can with our strongest hooks, our strongest verses and we’d build a song like that. “Oh, this sounds dope. I got something for this. I got a hook for this if you got a verse.” Whoever touched the beat first that second person would build on that, then back to the first person, and ReddRokk oversaw everything, mastered it in Japan. International work.

LoDeck: He’s in Osaka. We all met in Brooklyn though. It’s not an internet chatroom. It was in a cyber ring. We met in Brooklyn, ended up scattered, but still made an album together.

TRHH: What are your writing processes like? Do you write to a beat every time or do you have a pad of rhymes?

Boxguts: It’s different for me at least. Sometimes I write on my phone if a random idea will come to my head. I’m like, “I might forget this. Let me write that down.” Or I’ll just be jotting lines. Sometimes if I even sit down to write it might not be with the beat on. It will be before I get to the beat because the mind is already starting to work in a way where the rhymes are coming, so, let me just write this down. Other times, especially with this album, once we knew we were making an album, like three tracks in, everything was getting written to beat-wise.

Boxguts: Much agreed. It’s amazing because of how repetitious you can get when you’re not doing that. Falling into old habits. When you love the beat and it’s pulling it out of you, the whole delivery is different.

LoDeck: You kind of adjust to that particular beat.

TRHH: Why did it take you so long to record a follow-up album?

Boxguts: Good question We’re part of the same label, so, we stay doing tracks together. But we were always building on multiple projects with other people. Another thing we have in common is we both don’t produce. We’re both pretty much strictly emcee and when it’s like that you get the opportunity to work with so many other people pretty much every time you make a project. Both of us were working on a lot of stuff, but we both featured each other pretty regularly throughout the years.

LoDeck: We stayed busy. We made a lot of music in between. This is just the next logical step. We kept delaying it and delaying it because we were doing so much other stuff – solo stuff, other projects, you did collaborative projects, and I did projects with other producers. We did a lot. I just want to say rest in peace Biz Markie, rest in peace Labal-S, Shock G, DMX, it’s been a crazy year. It’s been on my mind. Labal-S was an emcee for Bloody Monks and he died February 21st of this year.

Boxguts: He was one of our brothers, part of our label. Another thing we had been building with Freestyle Cologne and kind of how the second Freestyle Cologne came to be was we were working on a label. Our label is more like a crew, a brotherhood, wouldn’t you say? We know each other. We’ve been building this EP because everybody is their own individual artist and we were finally coming together and then there would be tracks that Deck and I were more keen on that had more of a vibe for us to collaborate on rather than the rest of the group. I think that’s really how it started. Since the first one we’ve been like, “man, we gotta do that again” just because it was fun.

LoDeck: He’s the most efficient rapper I’ve ever worked with. There’s no delay when we’re writing something. He’ll hit you back in the next few days with his verse or his idea. The spark doesn’t get fizzled out by time. So, it’s always fresh when me and him work. He’s very efficient. That’s how he got a lot of projects under his belt. He’s stays very on point, professional, even when we’re having fun it’s professional as far as getting the 16 over, the wav files, the formatting, and all that stuff. He’s very on point with that, and that’s how we keep putting out so much music. Otherwise, it would probably be impossible.

TRHH: Deck, your verse on the song “Insane 4 Loving U” speaks on your journey in Hip-Hop. Besides love, what keeps you doing this thing called Hip-Hop?

LoDeck: Besides love, I would say like I said before in some of my lyrics, it’s a sickness to me. I can’t not have an idea in my mind and not put it out there. Either I’m writing rhymes, novels, or movie scripts. I’m always writing. I’m a writer since I was maybe 4. It’s just something I do. Rap is just the journey I ended up on weirdly enough, but I was a writer first before I did vocals. So, I still write. I’m writing a novel right now. I just can’t stop. Even if there is zero promotion, zero money, or if I’m in the red on my album it’ll be out.

TRHH: Box, on the song “Wild Way” you speak about overcoming drinking issues. What made you one, decide to become sober and two, decide to share that with the world?

Boxguts: So, I’m not quite fully sober. I tussle with it quite a bit. I think I wanted to share it because it was constantly bothering me for years. My inability to control how much I wanted to drink and when I start I just keep wanting to go, go, and go. I think I mentioned it, but it started with pretty much the good feel of it where I’m building the energy, I’m writing, I’m with my boys, and everything is good. To now where I’m home and I’m just drunk and I gotta wake up tomorrow and I gotta work. Where I’m at now I got a kid, and I smoke weed all the time, so, it’s like weed, booze, tripping and all that shit. I knew something has got to change in me and I wanted to kill the addiction. Not be sober in a way that I can’t get near it or else I’m a mess. I wanted to have the control that I never had. I thought it was a necessary thing to share to also help me to get it off my chest.

TRHH: So, it has helped you writing about it?

Boxguts: It has helped me and honestly, I’ve never had the kind of control that I’ve had over the last two years of my drinking. I can go weeks without it. I remember going my first three months without a single drop. I didn’t even know I could do that. Deck, you probably don’t even know that.

LoDeck: Nah. We drank. I know you can drink. That I know. The struggles with addiction you probably kept private.

TRHH: On the first single “For The” you say who you do this for on the hook in a joking manner, but who is the L’eau De Guts album made for?

LoDeck: I do it for those people. For the convicts, the wrongfully accused, the ones doing time for no reason. You feel their pain, I feel their pain, the beat brought it out. The novelists, the people that are underrated with the pen in all forms of art, not just Hip-Hop. People who get discovered after they’re dead. That’s the tragic fate of a lot of artists. I do it for them. The pharmacists; the people you can rely on if the weed is not legal you can still get it from them. You gotta respect that. The monolith; that’s like the futuristic writing. When we’re all gone and the civilization is gone there’s something on that monolith. That’s probably an important cultural event and I want to equate our art to that. The black swan’s the oddballs, the people that get overlooked, the people who write them off, the people who hop on the people that they bit from, all of those people. I do it for the forgotten ones. I think we both do.

TRHH: I misread that one.

Sherron Shabazz is a freelance writer with an intense passion for Hip-Hop culture. Sherron is your quintessential Hip-Hop snob, seeking to advance the future of the culture while fondly remembering its past.
View all posts by Sherron Shabazz →
This entry was posted in interview and tagged Because You Stink, Boxguts, Brooklyn, DJ ReddRokk, For The, Freestyle Cologne, Insane 4 Loving U, interview, Johnny23 Records, Las Vegas, LoDeck, L’eau De Guts, Nevada, New York, The Golden Godz, Vermont, Wild Way. Bookmark the permalink.