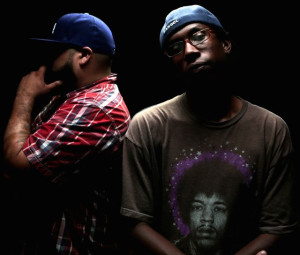 Tomorrow Kings emcee, Gilead7 and Echoes of Oratory Musik producer, Subtrax have joined forces for an album titled “Peaces of War.” The 9-track album meshes Gilead’s abstract lyrics with Sub’s boom bap beats. Peaces of War is a modern piece of work with a nod to the golden era that tackles the duality of the universe – peace and war.

Gilead7 recently spoke to The Real Hip-Hop about his issues with ethnic labels, the status of his Tomorrow Kings crew, and his new album, Peaces of War.

TRHH: Explain the title of the new album, Peaces of War.

Gilead7: Yes sir, yes sir! Peaces of War is really about the duality of nature itself. There is a peace which I define as the unity of all things. There is a diversity, which I define as the war, which is the individuality of everything. The title of the album basically indicates that there is no way that we can synthesize the two. We have to live within the tension. The songs on the record displays this in different ways; through the rupturing of religion, through identity, through Hip-Hop culture, et cetera. I’m just looking at the duality of nature itself and asserting that we can’t solve it, we have to live within it.

Gilead7: Oh yeah, oh yeah. I’m not here to bring hope; I’m here to bring awareness. I think there are ways that we can use this duality to bring about some sort of immediate resolve, but at the same time as soon as one solution happens another problem pops up. I enjoy the idea of living with intention.

Gilead7: I’m from Chicago and came to Southern California in 2009. In 2012 his crew Echoes of Oratory Musik were doing a show with Qwazaar from Typical Cats. Qwazaar is a long-time friend of mine. I said, “Y’all don’t know me but would it be cool if I could open? Is that possible?” They let me on and from that point on we gained a relationship. I linked up with Sub around 2012 and we’ve been kind of crafting things together from that point. It took us a while to get here.

TRHH: How would you compare the Chicago Hip-Hop scene to the L.A. scene?

Gilead7: That’s a great, fantastic question. My analysis of that just from growing up in that scene is there is a little bit more of an edge to Chicago Hip-Hop, especially Chicago emceeing. There is a style that we do that is heavily invested in gory imagery in terms of freestlying. When we freestyle we’re looking for a certain objective whereas when they freestyle out here is more about a stream of consciousness. Those are definite distinctions. Also, it seems like the way that public transportation is set up out here versus in Chicago there are microcosms of the Hip-Hop scene that never intersect. In Chicago if you’re out there you might be everywhere. There is a different overlap that happens in Chicago that doesn’t happen here.

TRHH: Tell me about the song Piece Offering.

Gilead7: Aw, that’s one of my favorite joints on the record [laughs]! Basically the word is not p-e-a-c-e but p-i-e-c-e. I’m looking at rupturing notions into fragments. The first notion in the first verse deals with the rupturing of religion where I say, “I was dope since I left Jesus hanging on Golgotha,” and things like that. I’m indicating a rupture from notions of Western Christianity and notions of claiming divinity in that form. The second verse is a look at Afro-diasporic and Mesoamerican identities and coding the question of how we define ourselves. Sit across the room from yourself after you separate yourself from yourself and ask yourself if you were the one to name your essence would you call it black? Looking at notions of identity, is it the best thing for us to identify ourselves through labels such as black and Latino? The third piece is the nature of Hip-Hop in general in terms of many people out there are looking toward maintaining the past and looking at doing that in ways that kind of hinder the culture in its advancement.

TRHH: To touch on part of that, do you believe that our labels hinder us in any type of way?

Gilead7: Yeah, I do. Labels are different. Some labels don’t involve histories of oppression like others do. For example labels like Latino, black, and white, these legal terms in many ways we attempt to redefine ourselves through these terms that were imposed upon us. I also touch on there being evidence that Africans were here before the middle passage. Before the middle passage occurred we didn’t term ourselves in language like that. So if we’re on a quest to find identity is it best go and reclaim those terms? I’m not saying don’t do it, but I’m posing the question, is it best to do it in those terms? Maybe it is. But it’s something we should be aware of.

TRHH: Do you worry that your rhymes or subject matter are too complex for the people who could benefit from them most?

Gilead7: Not really. Some people have told me that before. I don’t necessarily worry about that. My view of art is that first of all it’s for the individual making art. Those who gravitate toward it do, and those who don’t, don’t. There are other parts of my life that may be quote unquote more accessible to people. I also teach philosophy and religion at the college level. Maybe in those ways I think what I do may be quote unquote complex but in terms of art my crew Tomorrow Kings we always say, “Do art and the let chips fall where they may.”

TRHH: How would you classify your rhyme style?

Gilead7: I would say a dose of me fractured through a bunch of my influences. My first full-length The Dark Room, which I did in ‘05, was all Chicago. You probably know some of these guys like 5th Element, Molemen, I did the record around those guys. I think in that record all of my influences were present but I did something different. All of my influences range from Irish folk music, to Tori Amos, to a lot of Belizean music. I was listening to a bunch of Breeze Brewin, Juggaknots, and things like that. I would classify my rhyme style as a mix of all of that stuff the way I do. Very intense, very quirky, very obscene at times, and very thought provoking hopefully.

Gilead7: Right now we’re kind of all working on our solo records. We did a record in 2013, Nigger Rigged Time Machine. That was released through ReServed Records, which got us some good attention — nothing huge. It definitely raised some eyebrows and that created the atmosphere for us to do solo projects. Lamon Manuel just finished his album, Music to Feel like Shit To. SKECH185 and Analog[ue] Tape Dispenser just finished an album called War Church – their crew is called War Church, SKECH being the emcee and ATD being the producer. Jyroscope did a record called On The House, which is their interpretation of Hip-House. We’re all on our solo grind and hoping to come back together on some crew shit pretty soon, but that’s the move right now.

TRHH: Who is Peaces of War for?

Gilead7: This is kind of what me and Sub discussed. Because of Sub’s production style, it’s heavily boom bap, and it’s been a while before I rhymed over something like that. At the same time it’s my origins. I did some Tomorrow Kings stuff that was more experimental; it’s pushing boundaries in those ways. Sub pushes boundaries in different ways. I think the project is dedicated to both people who tend to like abstract more far-reaching rhyming and those that are dedicated to what’s called the pure essence of Hip-Hop – the golden era sound. It’s dedicated to both groups and sometimes those groups don’t intersect. I’m rhyming over boom bap tracks but not in a way that many people do. So I think we’re targeting those who love the purist shit and those people who do love rhymes of my nature.

Sherron Shabazz is a freelance writer with an intense passion for Hip-Hop culture. Sherron is your quintessential Hip-Hop snob, seeking to advance the future of the culture while fondly remembering its past.
View all posts by Sherron Shabazz →
This entry was posted in interview and tagged California, Chicago, Crop Circles 720, Echoes of Oratory Musik, Gilead7, Illinois, interview, Los Angeles, Peaces of War, Piece Offering, Subtrax, Tomorrow Kings. Bookmark the permalink.