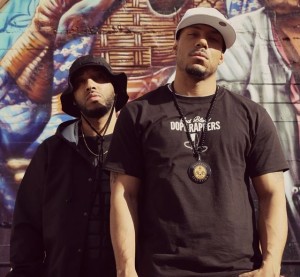 Established artists on their own, producer Centric and emcee Joc Scholar have joined forces as the Hip-Hop group Grand Opus. From Oakland and Fresno, California respectively, Centric and Joc have followed in the footsteps of legendary acts like Eric B & Rakim, Gang Starr, and Pete Rock & CL Smooth as DJ/producer and emcee combinations where quality is the number one priority.

The result of this union is a 12-track album released by Free At Last Music titled “Forever.” Forever is produced and mixed entirely by Centric and features appearances by Planet Asia, Fashawn, and Alicia Renee.

The Real Hip-Hop spoke to Centric and Joc Scholar about the formation of Grand Opus, the intricacies of their craft, and their new album, Forever.

TRHH: How did you two come together to form Grand Opus?

Joc Scholar: Me and Centric met years before we formed Grand Opus through a mutual friend in music. He introduced me to Centric and instantly I fell in love with his beats. We were doing music separately. I would hit him up when I needed a track and we worked like that for years. In 2013 we formed Grand Opus. We were coming into the new year and I said I wanted to do something different and go all-in on his beats. That was the birth of Grand Opus. The rest was history.

TRHH: What was the recording process like with you guys being in different cities?

Centric: It was like the Foreign Exchange process but not foreign [laughs]. We’re both in Cali but Joc is in Fresno and I’m in the Bay so it’s still a good amount of hours between us. To make things easier I do what I do –make beats that cater to him that I think is dope and I think he would think is dope. I would lay it down, send him the track and he would go to different studios to record in his area and get everything mixed and mastered. The internet can be a lovely tool [laughs].

Joc Scholar: No doubt. A lot of We Send Its.

Joc Scholar: The title Forever is significant because it’s the first track that we recorded for the project. That was the first single and visual that we put out as Grand Opus. That was our introduction to the world. That was the beginning of the recording process for the album. By the time we got to the end we still didn’t have a title. We didn’t have the title until we were going into the mixing process. We peeped how everything unfolded. I’m big on that – watching the signs, and it all fell together. Forever fit the whole concept of the album and it just so happened to be the first single. We weren’t even thinking of that being the title track.

Centric: Everything pointed to “Forever.” All of the signs pointed to that.

TRHH: Centric, what happens if you think Joc should say a rhyme differently? Or if Joc thinks a certain part of the beat should be flipped in a certain way? How do you go about critiquing each other during the process of making a song? Do you guys have that comfort with each other?

Joc Scholar: As far as I go me and my brother are so in tune with each other I literally never had to critique anything he does. He sends it and it fits. It literally fits like a glove. It’s like, “Whoa!” everything is exact.

Centric: Basically what Joc just said. So far it’s never been a situation where I think he should have done something different or he thinks I should have done something different. Our styles and personalities when it comes to music just fits so well together. I bring out the best in him and he brings out the best in me. It’s literally nothing to critique.

Joc Scholar: Are we comfortable enough to do that? Yeah, if that was the case. But that’s definitely not the case.

Centric: You want me to give away the secrets [laughs]. You want me to spill the recipe. I’m a “whatever it takes” type of dude. I know a lot of producers have a formula they stick with and whatever ain’t broke don’t fix it. I’m kind of that way but if I’m trying to achieve a certain sound I will use anything. I will go over people’s houses to get my hands on different drum machines. I will pop out the keyboard, I will go to someone who plays drums and get the sound from the live drums. I will use a computer program like Reason or Fruity. Whatever it is to achieve what’s in my head is what I do. On a normal basis I would say the equipment that I use the most is the MP. I kind of bounce between the MP and a computer program. I keep it classic for the most part.

TRHH: You guys have a song “Cen Cal Profile” with Planet Asia and Fashawn. How’d that song come together?

Joc Scholar: Me and Asia from the same era. We grew up together out here. We grew up in the whole Fresno, Cali rap scene. We watched it all unfold. Asia busted out and left, did his thing, and helped put us on the map. That’s nothing. Every time we see each other it’s like, “Hey, when we gonna do a track?” For me it’s gotta be the right song. Fashawn is like the next generation. He’s like the prince. He took it further. We all know each other and all see each other. Me and Asia came from  a different side of Fresno than Fashawn. It was nothing, it was just about the right time and the right track. When we did this album I didn’t want a lot of features on it, if any. When Centric sent me that track it was so Fresno, Cali. It was so perfect and it was the one I wanted Asia and Fashawn on. We’ve been talking and building on it for years knowing that we wanna do a track, but not knowing what track. That just happened to be the track.

TRHH: What’s your opinion on the resurgence of west coast Hip-Hop? The past couple of years has been heavy on the west coast like it was back in ’91, ’92.

Centric: Yeah [laughs]. It is, it’s heavy right now. I’m enjoying it, personally. I’m loving west coast Hip-Hop right now because to me the way it is on the west coast is the best of both worlds. What I mean by that is as far as the attention that west coast Hip-Hop is getting is reminding me of the early 90s, but the sound of it is more soulful, more authentic, and more conscious. I’m getting that real Hip-Hop sound but the attention that it’s getting right now is love too with cats like Kendrick Lamar. I feel like west coast Hip-Hop is in a good position right now. I think it was the perfect time for a group like us to come together and do what we do. I’m not just saying that, it’s not just my opinion. I’ve heard it from a lot of different people like, “Yo, this is the perfect time for y’all to drop a project like this for the west coast!” Everything is timing.

Joc Scholar: What I’m noticing as far as Cali making that resurgence is we’re not afraid to be those lyrical dudes now. I love how a lot of cats are spitting darts and spitting heat now as far as the lyrics. Not that it stopped anywhere else as far as the region. You have a lot of regional sounds and a lot of regions are going for that pop. That’s not to knock anybody else. As a whole mainstream-wise we’ve been out the spotlight since the Death Row era. Cali, they not trippin’. They spittin’ some heat. You got game Game, Blu, and everybody is spitting heat and bringing that raw essence of Hip-Hop. It’s just going in circles. It’s touching all regions, it’s just right now it’s Cali that’s keeping it Hip-Hop.

TRHH: Joc, on the song Beautiful you said a lot meaningful things about the good and bad that we see in the world. What specifically inspired that song and what were you trying to get across to listeners?

Joc Scholar: I think mainly what inspired that song is it was directly around the time of the Kenyan massacre, the bombing in France, and the San Bernardino massacre. Those types of events at that specific time sparked that energy when I heard the track. I knew I wanted a track like that but I didn’t hear it yet. That was probably the last song that we recorded that made the album. When I heard it, it was perfect because I knew I wanted to speak on something like that. Anybody who knows me knows that that’s a large portion of what I’m talking about and where my head is at. Pretty much current events, current state of the world, and of America. What I was trying to get across was to keep your eyes open and don’t take everything that you’re fed. Read the ingredients.

TRHH: What do you hope to achieve with Forever?

Centric: Oh man. Everything [laughs]. On a serious note what I would like to see happen with Forever is just for the public to recognize what we were trying to do as far adding to Hip-Hop culture. What me and Joc set out to do, we did. In my opinion we executed that perfectly. Everything was on time and the way we wanted it. It’s still the way we want it. I just feel like I want the world to see that. I want the world to see what we saw going into the project, making the project, and now that the project is done. We just wanna be a part of everything dope that’s going on in Hip-Hop right now. I feel like Forever has a place in that world. I just want to get some eyes on it and get the recognition that I feel it deserves. I think it’s a classic album. I know the word “classic” is really tossed around these days and I try not to use it unless I really mean it [laughs]. People are going to be like, “You biased,” well yeah, a little bit. But truth be told if I wasn’t a part of Grand Opus and I heard Forever I would think it’s dope. Hopefully the world sees what we see.

Joc Scholar: I’ll say the same. Pretty much recognition for what it’s worth, and for what it is, and for us to get that listen for it to be heard. One of my big things is that when you’re talking about stuff and you’re fairly new I’m a firm believer that if you make dope music it needs to be heard and eventually it will be. What we aim to put out with the album is our contribution. This is us from our mind and this is our contribution to Hip-Hop and it should be heard. Cats won’t realize it at first but we got a unique style and sound going on. We just want our place and for the Hip-Hop community to be like, “Them dudes dropped a dope album.”

Sherron Shabazz is a freelance writer with an intense passion for Hip-Hop culture. Sherron is your quintessential Hip-Hop snob, seeking to advance the future of the culture while fondly remembering its past.
View all posts by Sherron Shabazz →
This entry was posted in interview and tagged California, Centric, Centric & Joc Scholar, Enter the Opus, Forever, Free At Last Music, Fresno, Grand Opus, interview, Joc Scholar, Oakland, The Key. Bookmark the permalink.