A conversation with Ice Cube 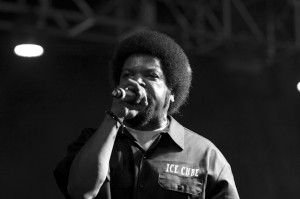 It’s fitting that the TheRealHip-Hop.com kicks off with an interview with Gangsta Rap legend, Ice Cube. Cube is Hip-Hop’s renaissance man having excelled as an emcee in four different decades as a member of N.W.A. and as a solo artist. Cube parlayed his rap stardom into television and film where he now wears multiple hats as an actor, writer, producer, and director.

Hollywood stuff aside Cube is still a beast on the mic at the age of 43. Currently in the studio working on his tenth solo LP Everything’s Corrupt; Cube has some not so subtle reminders on deck that he’s still the don mega. How soon we forget that Ice Cube is the man that penned the song Boyz ‘n the Hood and brought Gangsta Rap into living rooms throughout the United States. If Cube’s career ended twenty years ago with Straight Outta Compton, AmeriKKKa’s Most Wanted, and Death Certificate on his resume he’d still be destined for the Hall of Fame.

TheRealHip-Hop.com caught up with Cube before his set at Rock the Bells in the Bay. Cube discussed the importance of performing at Rock the Bells, the resurgence of west coast Hip-Hop, his sons OMG and Doughboy getting into the rap game, and where he sees his place in rap history.

TRHH: I saw you perform in like 1988-89 when I was 12-years old with Too $hort, Kid ‘N Play, Kwame, and J.J. Fad. This is a similar situation with the different variety of acts. Talk about what it’s like performing at Rock the Bells.

Ice Cube: It’s dope. This is what we dreamed of when I went to the Fresh Fest back in the day, which was a bunch of Hip-Hop groups touring. You said you were 12, I remember being on that tour very vividly. I talk about that tour all the time. That was the first time that we got to hobnob with some of those groups that we had seen as pros and this was our first time to be a pro. Here we go, 2012, you got all kinds of groups and Hip-Hop is still strong so it’s only right that you got a festival like Rock the Bells. To me everything is right where it’s supposed to be.

TRHH: Is it hard to come up with a set-list when you have so many classic songs?

Ice Cube: It is. We did Rock the Bells L.A. and I thought everybody wanted to hear a lot of old, old, old stuff and they really wanted a mixture. I usually try to give ‘em a mixture. For every new song that I do, I do an old song. I kind of try to spread the whole history from Straight Outta Compton to Westside Connection to my solo stuff and my newer stuff. I try to give everybody a mixture of it all.

TRHH: I was glad you pulled out ‘A Bitch Iz A Bitch‘ out there, man. That was incredible.

Ice Cube: Yeah, yeah. That was dope for all the old heads. We always try to pull something out our hat.

TRHH: Your sons are emceeing now, did you have any apprehension about them getting in the game?

Ice Cube: None whatsoever ‘cause they love Hip-Hop.

TRHH: Really? Those are some big shoes to fill.

TRHH: What’s your opinion on the resurgence of west coast Hip-Hop? A lot exposure is being given to the younger cats coming out now.

Ice Cube: It’s about time. We got a lot of flavor out here and a lot of talent. It’s incredible that they’ve carved a way. Everybody thought the west was about the gangsta shit or up north the pimp-player kinda thing but now you got all these different movements and different groups and it’s a beautiful thing. I’m glad they getting their shine and carving their own way.

TRHH: When people talk about the greatest emcees for some reason you’re not mentioned like you should be. Do you pay attention to that and if so, does it drive you at all?

Ice Cube: I don’t ever care about that. It’s people’s opinion. I never pay too much attention to it ‘cause if you talk to ten different people you’ll have a list of ten different emcees. So I ain’t worried about it. The proof is in the pudding. It is what it is.

Sherron Shabazz is a freelance writer with an intense passion for Hip-Hop culture. Sherron is your quintessential Hip-Hop snob, seeking to advance the future of the culture while fondly remembering its past.
View all posts by Sherron Shabazz →
This entry was posted in interview and tagged Ice Cube, interview, N.W.A., Rock the Bells, Westside Connection. Bookmark the permalink.