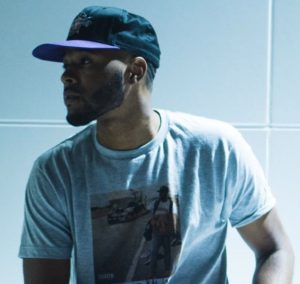 $hun is a Southern emcee with East Coast sensibilities. Originally from Memphis, Tennessee but now residing in Houston, Texas, $hun, much like yours truly, just loves that old boom bap. In 2016 $hun (short for Marshun) released his debut project “The Rough Draft.” Soon after he began prepping for the release of his second effort.

The Real Hip-Hop chatted with $hun about learning from the mistakes of others to help to keep him on the right path, his desire to meet producer 9th Wonder, and his new EP, Will Rap 4 A Way Outta Here.

TRHH: Why did you title the new EP, Will Rap 4 A Way Outta Here?

$hun: I titled it that because it was around the time of the election so I really wanted to play off of that a little bit. All of the material isn’t me preaching about material things but I kind of wanted to play off of that. I actually had the idea for the cover art weirdly before I had the title of the tape. It kind of helped me in my decision to title it that. I played off it in different ways; I played off it with the Trump thing and the election. Will Rap 4 A Way Outta Here, as in this situation that we’re all in. And also Will Rap 4 A Way Outta Here, as in just trying to make it overall without getting into a better place politically — better spot for my family and me being able to support people.

TRHH: I’m in Chicago so I’m a little cut off from the rest of the country. What’s the consensus on Trump in Texas?

$hun: It’s kind of both sides. Speaking on the issues I’ve seen a lot of people go both ways. I am also speaking with mostly African-American’s or “minorities” as they like to call it. It’s a lot of hate for Trump, but it’s also a few people that feel like he can actually do something good. I wouldn’t say everybody blows him off. It’s a lot of people that feel like it’s about to be a repeat of Ronald Reagan or something like that. I would say it’s more dislike toward him than it is like.

TRHH: Are these African-American’s that think that he might be able to do something good?

$hun: It’s a few, but mostly no. It’s not the African-American’s. With the people that I’ve had conversations with it’s actually one Hispanic that saw a lot of positive in him and Ronald Reagan. I didn’t live through that era so I wouldn’t know. They had a lot of good points to make on that. For the most part the rest of the people are white people that actually have a lot of positive things to say about him.

TRHH: Why did you choose to rap over 9th Wonder beats for the entire project?

$hun: These are beats from 9th Wonder’s beat tape called Zion. 9th Wonder has always been one of my favorite producers. I’m not even from the East Coast, I’m originally from the South. I’m from Memphis, Tennessee but I’ve been bouncing around a little bit, I’ve been in California and now I’m here in Texas. I was always real clingy to the East Coast sound and music. 9th Wonder to me is the boom bap god. I’m trying to get in touch with him. I want him to hear the project.

TRHH: I love the feeling of the single ‘Get Based!’ How did that song come together?

$hun: It was just me and my boy 1.2, we actually went to school together. That’s like one of my best friends. He was with me through all of the processes. He was with me through the process of putting together The Rough Draft and with me through the process of putting together this project. We were just going through the beats on Zion. It’s not really an intro to this beat, that’s why I said on the track, “Let’s get right into it.” Soon as the beat dropped we instantly got a connection. We both felt it and from there we just did our magic. We cooked it up. People always ask me what made me write this or think of this and I always tell them the beat told me to write it. Soon as I heard the beat I just heard, “Get based, get based!” A lot of people ask me, “What does it mean?” and I just tell them, “Create your own reality.” We play off it so many different ways that it can mean whatever you want it to mean.

TRHH: How is this project different from The Rough Draft?

$hun: It’s different because I feel like I experimented a little bit more with it. I know The Rough Draft is boom bap as well but I feel like with this project I actually expanded my artistry a little more. I tried to be a little bit more unconventional. The Rough Draft is unconventional but I would describe it as normal boom bap. This one is boom bap but it’s not something a normal artist would actually put out. I feel like a lot of the beat switch ups and sample-heavy songs is something I feel like a lot of people would listen to and like the beats but wouldn’t get on it.

$hun: The OG’s would be the OG’s in my neighborhood that I grew up in. I just came back from Memphis and everybody was giving a bunch of love and telling me to keep pushing. They want to see me do better than what they did because at the end of the day they’re still in the hood. As a kid coming up I actually looked up to these guys. These were the people I aspired to be like. I’m a young kid in the hood so really this was all I knew. I felt like these were the gods. As I left Memphis and broadened my horizons I can look back at it and see these niggas is really fuckin’ up. OG’s that I looked up to made sure that I don’t fuck up too, so I’m going to study their moves. I’m trying to learn from their mistakes so I won’t have to make the same mistakes. That’s why I say, “Live through the ones who peeped things, so you ain’t never gotta peep game.” If you live through them you already seen the mistakes they made so you already making the right moves.

TRHH: Do you have a favorite song on Will Rap 4 A Way Outta Here?

$hun: That’s tough. My favorite song would have to be Conversate, the outro.

TRHH: What do you hope to achieve with Will Rap 4 A Way Outta Here?

$hun: I really wanna meet 9th Wonder. He doesn’t have to sign me to Jamla. I just wanna hear 9th Wonder say I did his beats some justice and it’s dope. That’s really what I did it for, to get 9th Wonder’s attention. I just want to fly out to North Carolina and have a genuine conversation with him and a relationship. I’m a boom bap artist and I feel like 9th Wonder is a boom bap god. That’s really what I would hope to achieve and from there just let it keep building. I’m big on short term goals to help me get to that long term goal.

Sherron Shabazz is a freelance writer with an intense passion for Hip-Hop culture. Sherron is your quintessential Hip-Hop snob, seeking to advance the future of the culture while fondly remembering its past.
View all posts by Sherron Shabazz →
This entry was posted in interview and tagged $hun, Get Based!, Houston, interview, Memphis, Tennessee, Texas, Will Rap 4 A Way Outta Here, ’09 Jams. Bookmark the permalink.