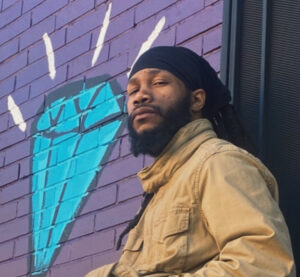 About 100 miles on I-95 separates Baltimore, Maryland and Camden, New Jersey. The two cities are home to emcee ILL Conscious and producer Mute Won respectively. The artists teamed up for an incredible album titled “Acres of Diamonds.”

ILL Conscious talked to The Real Hip-Hop about the pandemic stifling his inspiration, why he believes America is moving closer to becoming a Communist society, working with producer Mute Won, and their new album, Acres of Diamonds.

TRHH: How did you hook up with Mute Won to decide to do an album?

ILL Conscious: There’s roots to that. Fel Sweetenberg is a legendary Jersey artist and producer. He worked with Dirt Platoon. For those that don’t know, Dirt Platoon is a legendary duo from Baltimore that I roll with. Mute Won is Fel Sweetenberg’s little brother, so we thought it would make sense to keep that Jersey and Baltimore connection alive. A couple of mutual friends put us together, put us in the same rooms, put us in conversations. We were feeling each other’s material on a mutual level. That’s kind of how it happened.

TRHH: You dropped the video for Mutiny almost two years ago, why did it take almost a year to release the album?

ILL Conscious: Besides the fact that I’m a crazy perfectionist and critique my own art and all of that shit, there were issues with the engineering of the project – the mixing and mastering. When you have those types of issues a lot of things get put on the back-burner. We had to make things right and come to an understanding about things. The engineer that I was working with on the project was somebody that I had worked with in the past on previous projects. As you grow in this game circumstances change. Sometimes there is a different outlook on things and it’s all good. Sometimes you have creative differences. That was the main issue.

Another issue was the fact that the pandemic happened. Mutiny came out right before the pandemic was officially captured and everybody was talking about it. Mutiny came out in March 2020. The pandemic came and shut down a lot of my inspiration and motivation that went into the art. It was a long drawn out process. My writing process slowed up a bit. I kind of had to get back to self.

TRHH: What’s the meaning behind the title of the album, Acres of Diamonds?

ILL Conscious: It’s actually a book as well. The author is Russell Conwell, but the story has roots in Africa. The story is mainly about a farmer who is poor. His family is living in poverty and they hear about a land beyond yonder that has a lot of minerals, gold, and diamonds. Everybody is talking about these diamonds so he decides that he’s going to sell his farm and head east on this journey to find diamonds and become wealthy. So, he leaves his family behind and on his journey, he passes away. Before he left he sold his farm to a younger couple. The people that are on the farm start digging in the back yard and come across a stone. They continue to dig and there is a whole entire diamond field in the back.

The message that I wanted to come across was that I’m ten-plus years in this game right and to be doing it the way I’ve been doing it for so long at a high level, I just know to trust the process. Trust what I have and continue to understand that I’m on the right path, make the right choices, and all of that. The album is really a testament to trusting the process, integrity, and just kind of standing out as a lyricist, as an emcee, and being that rare stone. It’s so many different ways I interpreted it when I named it that though.

TRHH: On the song “Bloodsuckaz” you say “With religion and medicine you submit without understanding.” What did you mean by that line?

ILL Conscious: You know what’s going on right now – the pandemic. In other news you have propaganda – religion, politics. All of that at hand is really keeping us from reaching the level of righteousness and knowledge, wisdom, and understanding that we all deserve to have. It’s all about proper discernment in your life. If you want the government to control your movement, your thought process, or the way you digest your intake on a daily basis, then you’re going to become that. You’re going to become robotic. You’re going to become desensitized to what’s going on. You’re not going to be conscious of it. Religion and medicine, people are forced to take vaccinations to keep their livelihood.

Things are fucked up right now. There’s not really free will. We’re closer to a Communist society right now and a lot of people are desensitized to it. Religion and medicine, two of the biggest things that you can’t really question without being chastised. Two of the biggest things in America that means the world, religion and medicine, you submit without really understanding what’s going on – the inner and outer workings of our oppressors. These are the people that are keeping us in these positions, dealing with these circumstances, social, economically, everything that we as original people have succumbed to.

TRHH: You mentioned free will; do you think we’ve ever had free will in America?

ILL Conscious: Absolutely not. But we’ve had free will to rebel. It’s kind of a double-edged thing. Do you believe you have free will if you’re conscious and know that you’re not submitting to religion and government and all of that? Okay, you have the free will, then what do you do with it? What do you do with that if the masses aren’t all the way there with you. Are you ready to be a martyr? Because once you know the truth you’re a martyr. You get shadowbanned, blackballed, blacklisted, all of that. It comes with the territory.

TRHH: At the end of “Paradox of Value” you say “Peace to the innovators of the culture as we cease the infiltrators and the vultures.” That stood out to me because it’s something I’ve thought about on both points. Why do you think Hip-Hop doesn’t pay homage to the creators like it once did and how do we keep the people who don’t respect the culture out of it?

ILL Conscious: It’s simple, this game is all driven by the dollar. The pioneers of the art form stood for conscious Hip-Hop. They stood for something that would completely disrupt the agenda of the whole American corporate system – society. That would disrupt that completely. They’re cool with the Lil Uzi Vert’s and other guys that are killing each other. That’s a part of the agenda. That’s a way to keep the noose around our necks so they don’t have to physically do it anymore. Ever since the corporations have gotten involved in Hip-Hop it slowly has been changing the climate of it. The vibrations and frequencies are not there. You gotta search a little harder for it. It’s not on the radio anymore. It’s ill.

We gotta expose people. We have to expose them. We have to make knowledge born. Everyone has to understand what the rules are to this shit. Keeping it pure, keeping it unadulterated, that real shit. A lot of artists be like, “I’m not responsible for what I put out,” No, you are responsible for what you put out into the universe from the brain waves. So, we just need to really expose them. We need to expose them and start taking it back to that 90s shit, popping the DJ’s [laughs]. Turn their shit off. That’s gon’ have to happen.

TRHH: When I hear you, I hear elements of Big L. Is Big L an inspiration to you?

ILL Conscious: I never really listened to a lot of Big L growing up. I didn’t know about Big L until later in my rapping. I came across it and was like, “Oh, this is dope.” It’s one of those things where I can tell you that someone I did listen to was Hov. I was a big Jay-Z fan. I feel like Jay is one of my favorite rappers. Big L is dope. He’s a legend, but I wasn’t actively listening to him growing up.

TRHH: What other emcees influenced you besides Jay?

ILL Conscious: Nas, Em when he first came out. You gotta understand, I was young and in high school. I was just trying to craft the pen. It was prolific. Elzhi, Roc Marc, a lot of cats.

TRHH: How would you describe the current Baltimore Hip-Hop scene?

ILL Conscious: I can say that it’s divisive in the same tone that I can say that it’s eclectic and thriving. Because there’s a lot of beautiful art in Baltimore. A lot of different styles and genres of Hip-Hop, different types of rappers, and shit like that. Yo, we got the trap sound, we got the boom bap sound, whatever you need, we got it. We got the club shit. At the end of the day no one wants to see the next man win. No one wants to support this person. You know, you can support a couple of different artists at once. In Baltimore it seems like you can’t do that [laughs]. Someone else has to co-sign it.

ILL Conscious: A popping rapper [laughs]. Anybody with the clout.

TRHH: Who is the Acres of Diamonds album made for?

ILL Conscious: It’s made for the day 1 supporters, man. The ones from The Essence all the way up to now, that have seen my growth, my maturation process as a lyricist and as an emcee. The people that came to the shows and bought CD’s, vinyl, cassette tapes, and shirts. The brothers that hit me up constantly telling me their story of how my music influenced them and changed their lives on the daily. It’s a lot, man. I do it for them. I don’t do this shit no one else. I damn sure don’t do it for another rapper, ‘cause none of them can compete anyway. It’s like I’m shadowboxing [laughs]. I do it for the day 1’s. The people that’s really fucking with me that don’t need another motherfucker or a blog to post me or a certain DJ to play my shit. Nah, they rock with my shit and they stand behind it 1000%. So, I want to give you the best shit ever that I could possibly give you. So, I do it for them people, man.

Sherron Shabazz is a freelance writer with an intense passion for Hip-Hop culture. Sherron is your quintessential Hip-Hop snob, seeking to advance the future of the culture while fondly remembering its past.
View all posts by Sherron Shabazz →
This entry was posted in interview and tagged Acres of Diamonds, Baltimore, Bloodsuckaz, Camden, Ill Conscious, ILL Conscious x Mute Won, interview, Maryland, Mute Won, Mutiny, New Jersey, Paradox of Value. Bookmark the permalink.