Illogic: A Change in Mantra 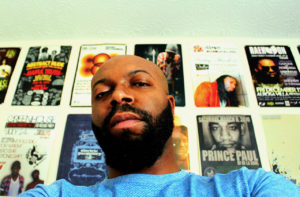 Veteran emcee Illogic is back after a two-year absence with a new EP called “A Change in Mantra.” The project finds the Columbus, Ohio native taking listeners on a ride through the peaks and valleys of this thing we called life. Illogic touches on subjects normally ignored in Hip-Hop circles, like being an artist that’s just barely making it, and resisting temptation to remain faithful while on the road.

A Change in Mantra is produced entirely by DJ Criminal. The 8-track EP was compiled, cut, produced, and partially mixed by Criminal in various cities throughout Asia.

Illogic spoke to The Real Hip-Hop about fighting temptation on the road, the importance of artists being true to themselves, and his new EP with DJ Criminal, A Change in Mantra.

TRHH: What’s the meaning behind the title of the EP, A Change in Mantra?

TRHH: On the title track you say a lot of positive things for your new mantra. How much of that song was inspired by things you’ve thought and how much of it comes from people around you?

Illogic: Honestly, it’s a combination of both. As a man that has children and raising them in this crazy world, all of the things that I said also relate to me as well as the world as a whole. Most of my music in general from the time I started has always been for me first. I always write for me first. I’m definitely influenced and inspired by the outside, but everything I write is for me first. Writing a song like that with so many little nuggets in there, a lot of it is me talking to myself about the things that I see that I need to change, as well as the things that I want to see changed in the world around me. It’s a combination of both.

TRHH: How did you hook up with DJ Criminal to decide to do this EP?

Illogic: Me and Criminal actually met in the early 2000s doing a show together in Chicago. I was opening for one of Eyedea’s tours. He opened for the tour and that’s when we originally met. Since then he’s reached out and we’ve done songs together for projects that he’s put out prior, and we’ve also done songs with Blueprint and other cats that I’m cool with. He just reached out to me and asked if I was interested in working on something. Because we have a good working relationship I was definitely down. When he sent me the beats it was definitely a good cathartic process of picking beats, us talking about songs, and coming up with everything down to the album cover and how it would reflect what’s on the record. We have a really great working relationship.

TRHH: The single “Look But Don’t Touch” speaks about temptation on the road. Is that song based on a true story?

Illogic: Not completely. It’s based on true feelings, true emotions, and true situational things, but not exactly a true story. I got married when I was 20-years old. I got married, went on my first tour, put out my second album, and had my first son all in the same span of three months. Really diving into my career and diving into being a husband and a father at the same time was really difficult. Being out there and not being confronted with the aspects of groupies, all you can drink, not having to pay, and all of that, it’s a lot of temptation out there on the road.

Especially if you’re a young dude that’s never been exposed to a lot of that. Just dealing with the relationship it was very difficult to say no a lot of times. As a man, women throwing themselves at you is difficult for us to say no to, but it’s one of those things, depending on the kind of heart you have and the kind of person that you have, if you will look but don’t touch. It’s just a song that I’m sure a lot of cats that have been in that position can relate to.

TRHH: I’m not in your position as an artist, but I can relate to the sentiment.

Illogic: Just as a man being out there in the world, women are beautiful! If you do have a woman at home it applies to that, too, not just us as artists.

TRHH: The song “Experience” talks about the not so bright side of being an artist; what inspired you to write that song?

Illogic: A good portion of it is straight from my life. At the time, in the beginnings of being an artist, trying to make this dream come true, having a family and having to have that pressure of doing music to pay bills. A lot of that is real stuff and real-life stuff for friends of mine also. It’s not all sweet. A lot of cats think you put a record out, go on tour, and life is set. That’s it. In real life a lot of cats are sleeping on couches, sleeping on floors, and barely making money on the road when they first start out just trying to get their names out there. It can cause a lot of stress at home.

It can cause a lot of internal things, even if you don’t have a family. Just as an individual it can cause a lot of stress. There are a lot of situations that people aren’t privy to because as an artist we want people to see the good side of things. We want to make sure that we have a great image to project out there, but a lot of people don’t know behind the scenes that somebody might get off stage and cry because their rent is due and they’re only getting $50 for that show and they’re a thousand miles from home. That shit is real. Like I said on the song, I wanted to give cats a peek behind the curtain of what their favorite artists had to go through coming up and getting to where they are.

TRHH: I think that’s important because I interview a lot of artists – some veterans, some brand new. I think it’s normal to have stars in your eyes. You think you’re going to blow up, but the average artists that I interview works a day job…

Illogic: Right! I do too [laughs].

TRHH: Why do you think a lot of artists don’t express that as much? That’s real life.

Illogic: Yeah, it’s real! Because the thing with art in general, and Hip-Hop especially, because it’s popularized now, because it’s so in the limelight with the flashy glitz and glamour, “I’ve got all these cars, I’ve got all these women, I’ve got a big house,” that’s what they want people to think that they are. They think they have to be what everybody else sees as successful. In reality, giving people a little glimpse behind what’s real, and giving people a glimpse of what your story is, is what really allows people to gravitate toward you and relate to the music that you do.

Since the beginning of my career I’ve never been afraid of going to dark places to tell people that sometimes I’m there. It gives people a sense of not being alone, because everybody goes through turmoil. Nobody comes out of the womb rich, on some real shit. Even people that grow up in affluent families, if their parents do the right thing, a lot of them had to put some work in to maintain that success. People have a glamorous idea of what Hip-Hop really is, but in reality, from people like Jay-Z to the little kid writing raps in his bedroom and his mom might be on drugs or at work, everybody goes through shit. It’s just some of us choose to acknowledge it and some of choose not to.

TRHH: You’ve been doing this a long time; what kept you going? What made you not give up on Hip-Hop?

TRHH: You’re coming up on 20 years since you released your first album. What would you say is the biggest lesson you’ve learned in the business of Hip-Hop?

Illogic: Don’t care what people think. Coming out when I came out, yeah, there was a wide-open world of music and people were more into being individuals, but I was kind of a weirdo. I always was the weird kid. Instead of being out playing basketball with my friends I was inside reading books or building stuff. I was always being my own person. The main thing is to always stay true to who you are. Never compromise who you are for anything. I’ve been in positions where I could have had million-dollar deals. I’ve been in positions where I could have been in movies and things of that nature, but those things didn’t fit into my belief system.

Those things didn’t fit into what I saw me being as a person, so I turned those things down. I would be in a very different position if I would have taken on some of those things and signed a deal here and there, but being true to myself allows me to sleep peaceful at night and not worry about what the next man thinks or what the next man is trying to scheme on or whatever. Always be true to who you are and always make sure that what you’re doing is you, and you’re not trying to please anybody and be someone you’re not.

TRHH: Who is A Change in Mantra made for?

It’s for anybody who wants to make changes in their lives and do better and wants to be a positive influence on this world, because this world is a mess. The whole title is basically about me coming to grips with things I need to change in my life, but as well understanding that the world needs to have a change in their mantra and how they approach life as a whole. If we can really realize that we need to change then I think the future could be very bright for us.

Sherron Shabazz is a freelance writer with an intense passion for Hip-Hop culture. Sherron is your quintessential Hip-Hop snob, seeking to advance the future of the culture while fondly remembering its past.
View all posts by Sherron Shabazz →
This entry was posted in interview and tagged A Change in Mantra, Columbus, DJ Criminal, DJ Criminal & Illogic, Experience, Flight Plan, Illogic, interview, Look But Don’t Touch, Ohio, Pennsylvania, Pittsburgh. Bookmark the permalink.