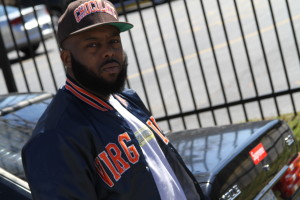 In September The Real Hip-Hop spoke to producer Phoniks about his stellar joint album with Awon, Return to the Golden Era. This time around the co-creator of one of 2013’s best Hip-Hop albums chops it up with The Real Hip-Hop.

Born in Brooklyn, New York but raised in Newport News, Virginia, Awon has Hip-Hop in his DNA. His smooth but lyrical vocals are reminiscent of top-tier emcees Rakim, CL Smooth, Buckshot, and the late Guru. Awon’s mix of substance and flow makes for a deadly combination when paired with Phoniks’ jazz-infused tracks.

The Real Hip-Hop.com spoke to Awon about working with producer Phoniks, his influences in Hip-Hop, and his new album, Return to the Golden Era.

TRHH: What did you think when you first heard Phoniks’ beats?

Awon: The first thing that came to mind was nostalgia when I heard his beats. I felt like I went back to the era of Hip-Hop I’m most familiar with which is 90s Hip-Hop. It filled a void that was present in my life musically for something organic. That’s why I was able to write quickly because I was inspired by his production.

TRHH: Explain the title of the album, Return to the Golden Era.

Awon: Return to the Golden Era is a bold statement. Anytime you compare yourself with the golden era of anything you are putting yourself in the company of the best. We felt like we had the best modern attempt at recreating that mid 90s New York Hip-Hop sound that is celebrated worldwide as the signature sound of classic 90s Hip-Hop. The golden era of the 80s was mainly diversity, what the 90s brought was a cinematic feel to each album. The evolution is evident and we just wanted to bring back innovation through simplicity in production, story-telling, and lyricism.

TRHH: What does the golden era mean to you?

Awon: The golden era means diversity and substance. It was a time where the competition was not a monetary war, yet the war of words and notoriety. The music was still art, and emcees and producers crafted their music with integrity holding the culture in high regard.

TRHH: How is Return to the Golden Era different from Beautiful Loser?

TRHH: When I spoke to Phoniks he mentioned how you were pumping out songs real fast. What’s your writing process like?

Awon: To be honest I write everything on my iPhone. I dump all my beats in iTunes and that’s all I listen to day in and day out. Sometimes I just have an epiphany and a song will end up done in 30 minutes. Sometime it takes a week. I record in the order of what comes to me first. As soon as I write it one time, I see my words so by the end of the verse it’s memorized. That’s how I can relay emotion even with a monotone delivery because I’m not just rapping on each track. I’m performing it for my audience. The laid back style is basically who I am and I take heed to that in writing as well.

TRHH: Tell me about the song ‘Champagne Laced‘.

Awon: ‘Champagne Laced’ was recorded second. That track felt like New York to me and with the Jay-Z sample I wanted to bring a poetic portrayal of a conscious hustler. I also wanted to make it visual. I wanted the listener to feel the adrenaline rush he got from the game as well as the paranoia. I wanted to end it on the note where the main character tells the audience he is never safe because he feels the end coming soon. Most of that song is taken from my cousin’s situation who is in the federal prison system for various crimes stemming from his man who served the feds and gave him up. You never know who to trust, there are no morals and values in the streets.

TRHH: Who are some your influences in Hip-Hop?

Awon: Man the list is crazy, but I would have to say Big Daddy Kane, Rakim, Slick Rick, KRS-One, Gangstarr, Nas, B.I.G., Jay-Z, Mobb Deep, Wu, Doom, J Dilla, so forth and so on. I would also have to say my wife Tiff the Gift because when we met she was so nice to me that it made us have a small competition. Emcees always try to out do each other so it was her that inspired Beautiful Loser and it is her that I go to, to get the okay on songs. I know she won’t let me play myself because I am a reflection of her and likewise.

TRHH: What are your goals in the rap game?

Awon: My goal is to continue to preserve Hip-Hop culture through delivering quality projects to young ears that still want art. I dedicated my life to Hip-Hop. I knew when I was 8-years old I wanted to be an emcee. Even though my first LP didn’t get released until I was 28 I am still living my dreams. I want to continue to participate in the culture until my contributions are not helping. When that time comes I will work within the culture at another capacity. Having children of my own I realize how important the youth is to our future, and I always keep them in mind with underlying themes about reality. I want the kids of today to be aware of themselves in a way that is absent from music. I want them to know they have power and what you believe you can manifest it through persistence. That’s why I keep a DIY approach. Hopefully my movement evolves and more people who seek understanding through art can pick up one of my records and find what they need.

TRHH: What’s next up for Awon?

Awon: I am committed to Return to the Golden Era. Phoniks and I are getting ready for 2014 and putting out merchandise and CD’s for those that would like something tangible and we are ending the year with a 2-disc vinyl LP release via Sergent Records out of France. We are shooting some videos next month and we are in talks about a follow up in 2014. Lots of people are reaching out with warm regards and I am still taking in all of the positive reviews that are coming in from this one project. I would like to thank you for this opportunity to speak and to have my audience gain some insight about who I am–so I am honored.

Sherron Shabazz is a freelance writer with an intense passion for Hip-Hop culture. Sherron is your quintessential Hip-Hop snob, seeking to advance the future of the culture while fondly remembering its past.
View all posts by Sherron Shabazz →
This entry was posted in interview and tagged Awon, Beautiful Loser, Champagne Laced, interview, Phoniks, Return to the Golden Era, The Soul Students. Bookmark the permalink.