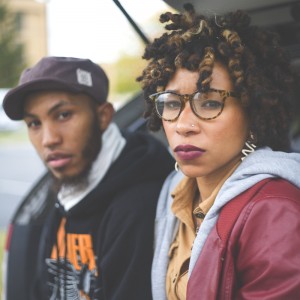 Not since KRS-One and the late Ms. Melodie performed as members of Boogie Down Productions in the late 1980’s has a married couple formed a Hip-Hop group. Big Samir and Aja Black, The Reminders are the latest spousal spitters in the game of rap.

From Colorado Springs, Colorado, The Reminders combine Hip-Hop with Reggae and Soul music to provide a sound reminiscent of the Fugees, Black Star, and Dead Prez. Their new album Born Champions is a 14-track stroll through wide-ranging sounds and emotions, sure to please fans of various genres. The duo is currently on the road with Brother Ali as part of his Mourning in America tour.

The Real Hip-Hop got the opportunity to speak to The Reminders about touring with Brother Ali, the ups and downs of being a couple in the music business, and about their new album, Born Champions.

TRHH: Explain the title of the new album, Born Champions.

Aja Black: We came up with the title Born Champions because we were going through a lot of things at the time and a lot of people around us were going through a lot of things. I heard a good story about Michael Jordan and how he was cut from his high school team. My father said, “What’s the difference between Michael Jordan and the rest of those kids? What makes Michael Jordan want to go in there and shoot 500 free throws and 500 three-pointers?” I said, “I don’t know,” and he said, “Some people are just born with the hearts of champions no matter what has happened to them in their lives. They’re going to succeed no matter how far they get kicked down, they’re going to become champions and be the best at whatever they can be the best at.” I was watching the Olympics and it inspired us more and more and that’s how the concept came together.

TRHH: How have you grown as artists since you dropped ReCollect? It was a good amount of time between releases.

Big Samir: With the second release we had more time to work on a full album. The first one was more a collection of songs that we put together to introduce ourselves. This one is more a full album that we’re comfortable with from beginning to end.

TRHH: What are the positives and negatives of being in a group with your spouse?

Aja Black: It helps with the dynamics of performing. One of the negative things about it is when we are both away we’re both away from our children at the same time. We have a really strong support system at home. This is the longest we’ve ever been away on this national tour. Thank goodness we’re going home Thursday to see the children. But that’s one of the negative things. When we have something to do we’re both removed from our regular situations.

TRHH: Are you guys competitive in the studio?

Big Samir: Nah, we don’t make competitive type of music. If anything we’re very supportive of each other.

Aja Black: One of the things that makes our music what it is, is our complement to each other. If we were battling it wouldn’t be the same thing. Our music comes from a place of love. If anything we encourage each other to get better, like, you can do better than that, not I can do better than you.

TRHH: There is a Reggae influence in your music but there’s also Soul and Hip-Hop. How would you classify The Reminders sound?

Big Samir: It’s a cross between Soul and Reggae. Ideally we’d like to go more of the Reggae route we just haven’t had the ability to.

Aja Black: I think I would just classify it as world music. I think it has an appeal to a lot of people because it’s a blend of so many genres. I think that’s what the “world” title is.

TRHH: You don’t hear much nationally about Colorado Hip-Hop. What’s the Colorado rap scene like?

Big Samir: There are a lot of artists nowadays trying to make it out of there. Most of the artists that have made it are of different genres, more Rock.

Aja Black: There are a lot of incredible artists in Colorado. I think it’s just because it hasn’t been one person stapling Colorado on the Hip-Hop map. I hope that with us kind of breaking out of Colorado to do some things I hope that this thing gets a little bit more attention.

TRHH: What role does Islam play in your music?

Big Samir: The same role that it plays in our daily life…

TRHH: What’s it been like being on the Brother Ali tour?

Big Samir: It’s been amazing. It’s a brand new experience for us. We’ve traveled before, but not like this. The love, the response, and the company has been wonderful.

Aja Black: He’s a great friend of ours. It’s kind of like when you’re younger and you shoot around on the basketball court and finally one day your big brothers says, “You got better, you can be on my team today.”

TRHH: The song ‘I Remember’ had some real personal issues in it. Why was it important for you guys to tell your stories in that song?

Big Samir: Because so many people can relate to even personal issues. So many people have similar situations happen to them so we figured we’d put that out there. It may help someone cope with what they have gone through and what they are going through.

Aja Black: We have a couple songs on our record that people have told us make them really emotional. They’re emotional topics and we wrote them from experience. It was very subjective, it wasn’t objective like, man it’s hard to grow up and everybody goes through this. It was like, man this is exactly what used to happen to me, particularly my verse on ‘I Remember’. I was teased as a kid and I grew to be a little bit of a bully. I’m somebody who understands both sides of that.

TRHH: What made you become a bully?

Aja Black: When I was younger I got into an accident where I lost the use of my left leg for a while. It left me with a lot of scars. When I was in school it was kind of like being handicapped for a while. I couldn’t move like the other kids and I was smaller than the other kids and it led them to tease me a little bit. When I started getting older and everybody went through puberty I was younger than the kids in my grade so I went through puberty later and they would tease me. One thing that I found solace in was the writing. I developed a very quick wit; everybody in my family has a very quick wit. So my mouth became the way I could just shut people down completely. I was a kid at 11 or 12-years old and the more people gave me props for that the more out of control I got with my mouth. Eventually I was bullying people, saying negative things and hurting people. So I found the power of the word both positively and negatively at the same time.

TRHH: The song ‘Tyson’ has my most favorite Mike Tyson quote ever on it. That’s the greatest interview of all time, it really is. What inspired you guys to use the Mike Tyson interview in that song?

Aja Black: [Laughs] When we first recorded the song originally we were going to try to put little Mike Tyson inserts in between the verses. While we were looking one of our very dear friends DJ Chonz from Radio Bums was doing the cuts and scratches and he sent that video and said, “This is it! This is all you guys gotta do!”

TRHH: What’s do The Reminders hope to achieve in the music business?

Aja Black: One thing that we talk about that we’d like to do is shed a positive light on things that sometimes get put in a negative light in Hip-Hop. Marriage is not advocated and when kids are talked about it’s not always in the way that we’re talking about them. If anything, I want to be an example to show that you can do whatever you want to do. Like the CD says, we’re Born Champions. When we got married people were like, “Samir you fell off now!” He was like, “Nah, I just got married.” When we had our first child people said we were done with rap. Samir said, “I’m not done. My child has inspired me to write hundreds of songs.” I think that we want to stand in a position of you can live your life the way you want to live your life and achieve all the things that you want to achieve as long as you have a commitment and dedication to it and your heart is in the right place.

Big Samir: Also to have a good time. Its music and music is supposed to make you feel good so enjoy yourself while you’re rocking to it.

Sherron Shabazz is a freelance writer with an intense passion for Hip-Hop culture. Sherron is your quintessential Hip-Hop snob, seeking to advance the future of the culture while fondly remembering its past.
View all posts by Sherron Shabazz →
This entry was posted in interview and tagged Aja Black, Big Samir, Born Champions, interview, Mourning in America tour, ReCollect, The Reminders. Bookmark the permalink.