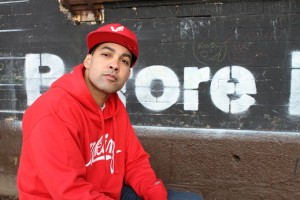 Pittsburgh is not only the home of stoner rap with acts like Wiz Khalifa and Mac Miller, it’s also the home the politically charged emcee, Jasiri X. X is known for writing topical tunes that touch on issues that affect the black community. ‘Free the Jena 6’, ‘Trayvon’, and ‘What if the Tea Party Was Black’ display Jasiri X’s creativity and his compassion for the oppressed.

Jasiri’s rhymes led to a recording deal with Wandering Worx Entertainment. Jasiri’s first release for Wandering Worx hit retailers this week and is titled Ascension. Ascension is produced entirely by Canadian producer Rel!g!on and showcases the sentient Jasiri X in addition to the spitter.

Jasiri X spoke to The Real Hip-Hop about his desire to be respected as a lyricist, working with producer Rel!g!on, and his new album, Ascension.

TRHH: The last time we spoke in 2010 you said Ascension was coming in early 2011. Why did it take so long to finally release the project?

Jasiri X: [Laughs] We wanted to do it right and make sure we had the business part of it down. We wanted to have the videos. We shot six and two of them have been released—we have four in the chamber. We just wanted to make sure we had the full push. We wanted to get a distributor on board to get it to iTunes and everywhere so people would be able to have access to the album. In hindsight I’m kind of glad. As we kept making more music the album got better. I’m in a much better place in my own personal life than I was in 2011. I think it shows in terms of how I’m writing the stuff I’m writing. If we would have dropped it in 2011 it would have been a much different album and I don’t think it would have been as good.

TRHH: You released the Rappers on X mixtape last month. Why’d you release that so close to the release of Ascension?

Jasiri X: People know me as this guy who deals with politics and current events. I wanted to give people an idea that I can really spit on this mic. I can go in. I kind of wanted to share that with people. Rappers on X was a compilation of features that I’ve done with other artists. It’s kind of a perception thing like, “I see Jasiri X with Sadat X. Oh, he’s with Mac Miller, Planet Asia and Ras Kass.” It was also to show people that as an artist that I’m beginning to be recognized by other artists that are established and well known. Also, I can spit with them as well. The idea was to inspire people to say, “Hey, this is good; let me see what this album is working with.” Hopefully it worked [laughs].

TRHH: A couple of the songs on the album don’t have the socially conscious themes that we’re used to hearing from you. Is it difficult for you to not speak on specific topics and just spit?

Jasiri X: Nah. I wanted it to be a real album. A couple of projects that I dropped whether it was American History X or #TheWholeWorldisWatching those projects were more like compilations of the current event stuff that I was doing. I wanted to create an album that had a theme, but also create an album that shows more of me as an artist. I always have a lane to speak on something that happens. As I was writing the album Trayvon came so I could speak on it. This album was almost therapeutic in terms of exploring myself as an artist. I think it gives people more of an idea of who I am. It’s like, “You’re speaking on all these politics but why? What drives you? What motivates you?” I think this album helps fill in some of those blanks.

TRHH: You mentioned how on the mixtape you had a lot of guest features but on Ascension you kept it to two emcees, Brother Ali and Rhymefest. Talk about how the collaborations with those two guys came together?

Jasiri X: Rhymefest was actually one of the first established artists that reached out to me. It was through a mutual friend. Rhymefest has been very politically active in Chicago. I think he saw what I was doing with community activism and decided to deal with me. This is a guy that’s behind some of the biggest hits in Hip-Hop. The Kanye that you hear on Cruel Summer is choreographed by Rhymefest. It was cool for me to build with him and we did a few songs. The song ‘By Any Means’ is closest to the political Jasiri X. Rhymefest set it off when he wrote his verse on the day Steve Jobs died. I wrote my verse on the day Troy Davis’ sister passed away. It’s a pretty hardcore song.

Brother Ali just hit me on Twitter one day and told me he liked my work and if I needed anything to holler at him. I hit him back like, yo can you hop on this album? I sent him the track to ‘Pillars’ and he smashed it down like he does. Brother Ali is one of the coolest, most humble, dopest dudes in Hip-Hop. We shot a video for the song and the brother came out the day before his tour. We shot the video on skid row in L.A. at night. We were holding torches and doing all types of illegalities [laughs]. Brother Ali was cool and I got a lot of respect and love for that brother.

TRHH: Was it strategic to have Rel!g!on produce the entire album?

Jasiri X: Absolutely. The thing about Rel!g!on’s production is he doesn’t have a signature sound. His beats are so diverse and that’s what so good about him doing it. We wanted to go back to that time in Hip-Hop where there was one producer and one rapper. It gives it more of a synergy. He’s not just throwing me beats. On certain songs like ’21 Forever’ he’ll say, “I have a concept for this,” and he’ll guide me through that process. Nowadays in Hip-Hop a lot of times it’s one rapper and twenty producers and it can lead to a project that’s not as cohesive.

TRHH: Talk a little about the single ‘The Wheel’.

Jasiri X: Rel!g!on sent me the beat and said he wanted some real conspiracy type stuff. That was one of the earlier songs that I wrote and at the time Minister Farrakhan had done three lectures in a row and the topic was called The Wheel. I wanted to explore it in a Hip-Hop way that’s why the hook is clips that talk about the reality of what they call UFO’s. I have my own footage that I personally recorded. It wasn’t good enough for the video but I’ve seen these objects myself when I was in Miami, Florida. I thought it was an interesting topic to explore. It’s the last track because it kind of represents literal ascension. It’s Rel!g!on’s favorite song on the album. He loved it and said we gotta do a video for this. We went out to the Mojave Desert and shot an incredible video with CGI and everything. It’s just me basically saying, these wheels exist. All these other countries are saying it and Jimmy Carter to Buzz Aldrin saying it, to different footage. It’s just me saying this is something that’s’ real.

TRHH: I love Minister Farrakhan and he’s been a huge inspiration to my life but for most of his critics outside of the Jewish community, that’s the one thing that people question, the wheel. They say, “What’s he talking about with these wheels?”

Jasiri X: It’s funny. Maybe back in the day before YouTube and cell phones but it’s so much evidence now. It can’t be that many weather balloons in the sky. An article just came out in Huffington Post where in Amherst, Massachusetts all these people saw this thing in the sky and the Air Force said, “Oh yeah, we have this plane.” The people were seeing this thing move very fast and it was silent. The Air Force said the plane that they had was a huge B-6 that was big and loud. Even the people writing the article said it can’t be true. One of the people that I have on that song is the former Governor of Arizona. He was Governor when the Phoenix Lights appeared over Arizona. This is a Republican Governor who is a former Air Force pilot and he’s saying, “Unless somebody can give me some information that’s different that has to be a UFO.” I just think too many people have witnessed it, seen it, wrote about it, and videotaped it at this point to just dismiss it. France and Brazil have opened up files about it.

TRHH: I think it’s because the Minister speaks in detail about it. A lot of people are like, “Hey, I saw something and I don’t know what it is.” I think people are more comfortable in ignorance than in him giving details about what he experienced.

Jasiri X: That’s somebody that is talking about his own experience. I was driving real late one time and I was listening to this interview with this woman who had written a book about people in the military’s experiences with seeing UFO’s. I don’t know who is in the wheel. I’m not trying to say it’s this person or an alien. I just know what I saw and I know what evidence is being presented. That was what she was saying, she said, “When it comes to unidentified flying objects I’m an agnostic.” We can’t at this point deny the existence of these. Do we know who is flying them? No. But you can’t deny the existence of them.

TRHH: What do you hope to achieve with the new album?

Jasiri X: The album is called Ascension and the concept of the album is if Hip-Hop is dead where does it go? It either goes up to heaven or down to hell. The concept of the album was to raise Hip-Hop to a higher lyrical, spiritual reality. I’m hoping the album can bring Hip-Hop up and I hope it was achieved whether it’s production or lyrical. I tried to create an album that had a lot of spirit to it—the frequency was spiritual. I hope to raise Hip-Hop up to a higher level.

Sherron Shabazz is a freelance writer with an intense passion for Hip-Hop culture. Sherron is your quintessential Hip-Hop snob, seeking to advance the future of the culture while fondly remembering its past.
View all posts by Sherron Shabazz →
This entry was posted in interview and tagged Ascension, interview, Jasiri X, Pillars, Rappers on X, The Wheel. Bookmark the permalink.