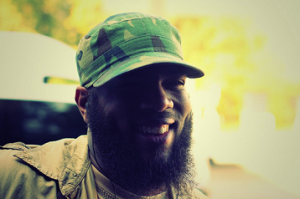 In 2010 a trio out of Detroit known as The Left released a phenomenal album called Gas Mask. The Left is comprised of Apollo Brown, DJ Soko, and Journalist 103. The emcee of the group, Journalist 103 caught the attention of Hip-Hop listeners worldwide with his straightforward delivery and carved out a spot for his self as one of the most talented and refreshing new lyricists in the game.

Journalist 103 spoke with The Real Hip-Hop.com about his musical influences, how his religious faith is woven into his music, and about his new album, Reporting Live.

TRHH: Tell me about the album Reporting Live.

Journalist 103: Reporting Live was my slogan that I would say all the time when I was doing interviews. I’d say, “This is Journalist 103 reporting live,” it kind of fit so when I came out with my debut solo album it was Reporting Live. Reporting Live is pretty much telling you what’s going on right now. If anyone follows me they know about the work I did with The Left, they know the Gas Mask was pretty much the prediction. Now you’re dealing with what’s going on right now—the state of Hip-Hop, the state of the world, the state of me.

TRHH: What’s the message behind the song ‘Danger’?

Journalist 103: That song came about when I hooked up with my man Marc Byrd. It’s pretty self-explanatory. I’m just talking about urban life and what’s going on in our neighborhoods daily. You turn on the TV and hear about what’s going on in Syria and Libya and it’s like a huge catastrophe, but where I’m from that’s normal. You get kids, black youth, and indigenous youth getting murdered all the time. You hear gun shots so much to where you are immune to it.

TRHH: I’m from Chicago so I know exactly what you’re talking about. Why do you believe that black on black violence is normal? Why do we accept it?

Journalist 103: I don’t think it’s an acceptance, I think it’s one of those situations that’s unavoidable. When you start talking to the youth in the neighborhood about change, they don’t have any vision. They don’t see anything beyond what goes on in their neighborhood, circumference or block. It just becomes the norm. If you take some of these same kids out to the suburbs where it’s quiet, people are smiling, and you see families with mothers and fathers in the home, or if you give them the proper education it’ll open their eyes up to things differently. We’re accustomed to doing everything in hostility. I don’t think it’s more of an acceptance, we just adapted to it and it accepted it as the norm when it’s not the norm. It’s actually quite traumatic.

TRHH: Coming out of Detroit who inspired you to want to emcee?

Journalist 103: First and foremost my cousin X-Gov. He used to be a part of Royce’s group which was known as Wall Street back in the day. He put me up on Gang Starr and DJ Premier and then I got exposed to Proof, Royce, Em, and Phat Kat. I didn’t even realize Hip-Hop existed around that time. He was one of the primary people that helped shape and mold me.

TRHH: Explain what the 103 in your name means.

Journalist 103: My old rap name was J Clip. I was freestyling in a cypher with this guy and my friends were saying I was going off like an automatic tec, like the clip of a gun. I was walking around with J Clip but my content was too heavy to be abrasive. One day I was in school and I was doing a report and my teacher walked past and looked at my monitor and said, “You write really well, you should be a journalist.” So it kind of stuck with me and I felt the evolution of myself as an artist taking flight. I wanted to keep that J Clip as a self-defense kind of thing. I was looking at the alphabet and saw that J was the tenth letter of the alphabet and C was the third letter, so that’s where 103 came from.

TRHH: What role does Islam play in your music?

Journalist 103: It plays a huge role because a lot of the Muslim youth are clinging to Hip-Hop right now. I really feel like I have a responsibility to help give a balance, especially with all of the music that’s being promoted nowadays. I feel like I have to provide that alternative. People see me and can obviously tell that I’m Muslim but I try not to be super-preachy and make it seem like it’s an Islamic record because at the end of the day it’s Hip-Hop. I want to keep that raw edge and at the same time let it be known that it’s OK to be a Muslim. Erykah Badu came out and let people know it’s OK to be a 5%er. It’s OK to be a Christian or whatever your faith is and still do your art. You can still have morals and integrity and still do your art-form without worrying about compromising your integrity or morality especially being studious, because Muslims read a lot from scriptures to prophetic traditions, to everyday life. We’re always trying to read something. It has a huge influence on my writing and what kind of content I’m trying to put out.

TRHH: A lot of scholars say that music is haraam. I interviewed Sean Price last year and he said that he was conflicted because his music is haraam but he loves what he does. Do you ever feel conflicted about your music?

Journalist 103: Well first and foremost music is not haraam. There is no sound tradition from the Prophet that he forbid or said that music was haraam. As a matter of fact during one of our Eid festivals it was a tradition where people were playing music and they tried to prohibit the music from being played. He told the people “Leave them alone. This is our holiday. This is our time for celebration.” If it was illegal for us to do he would have made it clear. However, I’ll take the stance of one of our Islamic scholars Imam Ghazali. He said, “Music is like food. You’ve got good food and you’ve got bad food.”

Now speaking on Sean Price as somebody who grew up listening to him I can see why he would say that because he curses a lot and his music is real gritty. The overall music itself isn’t haraam, it’s the content. I think Lil’ Kim is dope but I don’t listen to Lil’ Kim. I think she can rhyme but she’s a little too raunchy for me. Its good food and bad food, you got juice and you got liquor. You got a nice salad and some really greasy fried foods. That’s the stance that Muslims should take with music but music and poetry is very rich in Islam. If anyone does the history they’ll see that even during the times of the Prophet, may peace and blessings be upon him, he had poets on his side that used to go and recite poetry about Islam to those who were in opposition to Islam growing and spreading. It’s all about knowing your stuff too that’s why I’m like, that’s not true, just to set the record straight.

TRHH: How was recording your solo album different from doing an album with The Left?

Journalist 103: It was very complicated because I didn’t have one producer at my disposal. It came out a lot better because everything doesn’t sound the same. The momentum is the same, the drive is the same but all of the music isn’t the same. You kind of get a treat because none of the beats sound the same. It was difficult because I would get so many producers sending me beats. It’s crazy when you listen to 20 or 30 producers and it might be 2 out of 30 that are really good. I won’t even say that because I’m real picky, I’m very critical. If it don’t catch me in the first twelve seconds then it’s not going to catch me. I’m one of those artists, it takes twelve seconds and I already know if I’m going to mess with it or not.

TRHH: Were you suprised at the critical acclaim that Gas Mask received?

Journalist 103: Actually I was. I think the biggest surprise that I got was when Primo, not only did he play it on the Hit Factory, but he tweeted that I among other emcees from Detroit was one of the dopest emcees to come out of the D. For him to even know my name I was like, whoa! That really took me by surprise. To actually come out with another record and have DJ Eclipse spin the record on his show is equally as dope. Now people are hearing me and it shows that people are checking for you whenever you drop something like, “Oh yeah, that’s my man from so and so.” I didn’t expect it but it was definitely the breaking point that me, Apollo, and Soko needed to catapult us to get to that next level of our careers.

TRHH: How’d you hook up with Saigon and Fashawn to record ‘Hear Me’?

Journalist 103: The label and myself were trying to figure out which artists we wanted to work with. They had as much pull as they did as far as working with certain artists so I threw some names out there and they were like, “We can do that, we can do that.” The next thing I know we had Saigon and Fashawn on the record. I wasn’t even expecting it and it was kind of dope because when I got the record back and heard Saigon’s verse I could tell he really liked the record by the way he was rhyming on it. Me and Saigon have never met, never sat down and had coffee, but I can tell he’s a genuine cat because I listened to the record and I could tell he was feeling it, like yeah! That was a real dope look.

TRHH: What’s next up for Journalist 103?

Journalist 103: Right now I’m trying to set up show and tours, and trying to network with promoters and what not. I’m trying to really get the album out there in the States and overseas abroad. I’m actually brainstorming on my next album. God willing we’ll be able to get that out there. That’s something I’m trying to make manifest by God’s permission.

Sherron Shabazz is a freelance writer with an intense passion for Hip-Hop culture. Sherron is your quintessential Hip-Hop snob, seeking to advance the future of the culture while fondly remembering its past.
View all posts by Sherron Shabazz →
This entry was posted in interview. Bookmark the permalink.