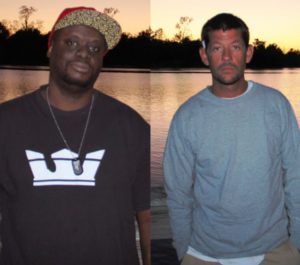 Fuzz Jaxx and Sam Brown are LegSweep Specialist. From Augusta, Georgia and Greenville, North Carolina respectively, the duo met in Wilmington, North Carolina where they began their working relationship. Hip-Hop veterans in their own right, Brown and Jaxx brought their talent and experience together for a full-length album titled “LegSweep.”

LegSweep is an 11 track album chock-full of soulful beats and introspective lyrics. Released by Below System Records, LegSweep is produced entirely by Sam Brown and features appearances by Nottz and MindsOne.

The Real Hip-Hop spoke to Fuzz Jaxx and Sam Brown of LegSweep Specialist about the origins of their groups’ name, the North Carolina Hip-Hop scene, and their new album, LegSweep.

TRHH: How did you guys get together to form LegSweep Specialist?

Sam Brown: Originally Fuzz was part of a band here in town called The Organix – was the emcee. I used to go see him all the time at live shows. I was looking for an emcee to work with and he was looking for an engineer at the time to record his music. I engineer as well as produce, so basically while engineering for him we ended up connecting with the music he heard me making on the side.

TRHH: Who came up with the name LegSweep Specialist? The name is super dope.

Fuzz Jaxx: [Laughs] That’d be me, man. Since the first day I heard Sam’s production I was like, “Yo Sam, your beats are gonna take people off their feet like a leg sweep.” When we started making more music I was like, “Yo, we should just go with the name ‘LegSweep Specialist’ because the music is gonna take you off your feet as soon as you hear it.” We just went with that and it kind of stuck.

TRHH: What inspired the single After Life?

Sam Brown: As far as me I feel like a lot of the stuff that’s hot nowadays is so see through. I feel like one thing that me and Fuzz definitely have going for us is everything is genuine. We are who we are. We aren’t trying to impress somebody just because they’re that type of way. If you enjoy my music then I think we’ll vibe well. I don’t think we were looking to fit into somewhere. We just wanted to carve our own lane and run with it that way.

Sam Brown: I just think that is the level of North Carolina that the masses have heard. To be honest, Wilmington is a half a million people population and there may be five people that we work with who truly enjoy and make boom bap and traditional type Hip-Hop. Charlotte and a bunch of other places in North Carolina are about to blow for a lot of the more traditionally southern trap music. I think the few people who have gotten opportunities to shine out of North Carolina have actually been the right people, ironically. It’s so few and far between when you’re trying to work with people to find what’s genuine anymore. The few that are here in the state try to uphold each other.

TRHH: That’s interesting. That’s not the norm. Usually it’s the opposite and the other sound comes out. Why is that?

Sam Brown: I don’t know. That’s a good question. To be honest the whole reason that North Carolina music ever got attention is because of Little Brother and the fact that 9th Wonder had produced on The Black Album. Before that there were ties to Hip-Hop but people weren’t really looking at North Carolina for production or beat makers. I think that the only person that has really made it as far as production is 9th and now you have Khrysis, and people who fall under him. He’s the one person that has the outlet or the plug. If you make a different type of music it doesn’t make sense for him to plug that. It’s not like he’s cutting the gate off, he just doesn’t make that type of music.

TRHH: What’s your take on the new wave of artists that view the boom bap sound as old?

Fuzz Jaxx: I think a lot of it has to do with them just being so young that they don’t get it. From that standpoint I really don’t mind it. It’s just when they try not to accept that that was the norm at one point and try to call us old and say it’s dated without giving it a chance, that’s when I have a problem with it.

Sam Brown: At 17 Miles Davis wasn’t my shit, but now Miles Davis is my shit. I wasn’t hating on Miles Davis back then like they hate on the old stuff today. I know why it happens. I think with anything in the media nowadays they’re gonna show the most outlandish statements that go on. They’re not gonna show you the kid who truly likes Hip-Hop if that’s not what’s gonna get clicks on YouTube.

TRHH: Do you have a favorite song on LegSweep?

Sam Brown: I gotta go with Faded. It’s kind of the direction I wanna take Fuzz on the solo project. It’s one you can twist one and ride to. All of the other stuff I don’t take anything away from it. I listen to the whole album from beginning to end and every time I get to Faded I’m like, “Damn, we couldn’t have ended this album any better.” It’s like the point that I wait for. It makes everything end on a good note. It sums everything up for me.

TRHH: What do you hope to achieve with LegSweep?

Fuzz Jaxx: Basically with this album we wanna let people know that North Carolina is here and we ain’t going nowhere. We’re two artists that really, really enjoy what we do. There are so many artists out there doing Hip-Hop but I don’t really hear the enjoyment. With LegSweep, I just want people to know that this is Hip-Hop music that you can enjoy listening to and you can tell that we enjoyed making it. We wanna bring that enjoyment and excitement back with LegSweep. Back in the day every Tuesday we’d wait for new records to drop and we’d be so excited. We’d go cop the CD and be like, “I’ve been waiting for this and now I got it!” You just wanna play it and listen to it and I feel like that’s what we’re bringing back with this album. We’re bringing the faith back into the movement like, yo, there are still real emcees and producers that love what they do. Nothing else matters and you can hear that through our music.

Sherron Shabazz is a freelance writer with an intense passion for Hip-Hop culture. Sherron is your quintessential Hip-Hop snob, seeking to advance the future of the culture while fondly remembering its past.
View all posts by Sherron Shabazz →
This entry was posted in interview and tagged After Life, Augusta, Below System Records, Fuzz Jaxx, Georgia, Greenville, interview, LegSweep, LegSweep Specialist, N.H.A., North Carolina, Organix, Sam Brown, Shaft, Wilmington. Bookmark the permalink.