Posted on December 7, 2020 by Sherron Shabazz 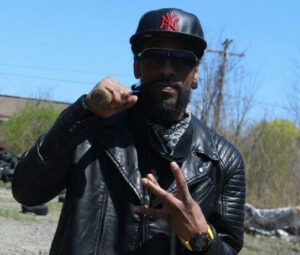 DBTZ of ManZu Beatz produced Universal Tongues in its entirety. The EP was mixed and mastered by Emefe Music.

The Real Hip-Hop chatted with M Doc Diego about his distinct voice, what it’s like making music with his father, Greg Nyce, and his EP with DBTZ of ManZu Beatz, Universal Tongues

M Doc Diego: During the beginning of the pandemic ManZu Beatz reached out. He happened to follow me on Instagram and he had just dropped a project with Jamal Gasol – he’s from upstate New York, too. Being that he’s from Italy, he reached out and we started building, talking about what he was doing, and all the stuff that I was getting into, that’s kind of how it began. The first track, I named it “Universal Tongues” and after that I decided to name the whole project after the title track.

TRHH: What was the process like recording the EP?

M Doc Diego: It was dope. He sent me zip drives of mad beats. I think I picked like five of them. After that he was just feeling them so much that he sent an intro and interlude. My dad has his own studio so I recorded there. I would send him a rough mix and then I would send him the vocals through Gmail. That was the first time I ever did this, doing a project via internet.

M Doc Diego: Nah, not really because he knows English. We did talk about that. I would ask him a couple of things so I could incorporate it in the project. I know a little bit of Spanish and he knows Spanish as well. We were able to communicate pretty well because we both know English. That’s my first language, so that was helpful to me.

TRHH: What inspired the song ‘Play Me Close‘?

M Doc Diego: As soon as I heard the beat I just knew that this was going to be the anthem track. I’m talking about not only where I’m from, but keeping the whole message of Hip-Hop, being original, and having that street edge and grittiness to it. that was the whole inspiration – the beat, talking about where I’m from, and keeping it Hip-Hop. The beat was just speaking to me. That’s the second or third track that I did and he was feeling it. It’s doing pretty well. A lot of people like it and we’re getting a lot of good feedback from it.

TRHH: Earlier in the year you released Bobby N Huey with Greg Nyce who is your father, right?

TRHH: What’s it like doing music with your dad?

M Doc Diego: It’s dope. He is like a legend up here in Rochester. If you remember 106 & Park’s Freestyle Friday, my cousin, SunN.Y., was one of the first winners, and my dad worked with him. A lot of people know Spesh, we used to call him 38 Spesh back in the day, Eto, all of the cats that people know today from Rochester used to work in my dad’s studio. That was my inspiration growing up. He always says I was born with two Technics 1200’s and a microphone, so I’ve always been around Hip-Hop. That was just the bug, being around him, sitting back and watching all those dudes record and I had to take my turn.

I would say ten years ago was when I started taking it seriously, using my dad’s studio, and watching him deejay. I remember I got to meet Marley Marl because he opened for him. I got to talk to Marley Marl and Craig G because they came here to Rochester. That’s the blessings of being a part of somebody in the music industry as far as the underground, not too much mainstream. He met DJ Premier before, Diggin’ in the Crates crew, and he knows the producer Minnesota who made beats for Big Pun and the Money Boss Players. I’m just lucky.

TRHH: Would you say your father, Greg Nyce, specifically inspired you to be an emcee?

M Doc Diego: Yeah, pretty much. Just watching him deejay and he started making beats when he was recording all of these artists up here. That got me writing and whatnot. I used to write poetry and I used to visit up here, because I grew up down south in North Carolina. I would come up here to Rochester in the summer growing up and I would be in the studio while he would be making beats. He would send me home with some beats and I started recording and just practicing. Like I said, ten years ago was when I started taking it seriously.

This project that him and I dropped took seven days to make. He sent me the first beat “Dark Brown Shade” and after that he sent me the rest of the beats and literally in seven days the project was done. That’s all I do is I write. I take care of my kids and my family and provide for them, and just do my music. It’s a hobby, but it’s also becoming a second stream of income and a business for me, so, I had to start taking it seriously a few years ago. Bobby N Huey was the first project that me and my dad did together. He did all the beats, mixed it, mastered it, and all of that. He even scratched on it a little bit.

TRHH: What advice has your dad given you about being in Hip-Hop?

M Doc Diego: He had plenty of opportunities to take it to the next level, but he was always afraid of the spotlight and second guessing himself. God bless the dead, my mom passed away seven years ago and that’s what really made me push the envelope. You don’t get too many chances. I remember when I first dropped a project I had people like Chuck D following me on Twitter. I dropped a video a few years ago and Freeway commented under my video. ManZu Beatz hit me up during the pandemic and said he wanted work with me, and he’s a dope producer who has worked with people in Wu-Tang. Being that he’s from Italy and is working with all of these artists from Rochester, Niagara Falls, Buffalo, and whatnot, that lets me know that I’m moving in the right direction. I’ve got people like my dad in my corner who are there for me to give me advice, and not only show me how to record and mix, but also let me know that I’m doing it in the right way, doing it my way, and don’t let nothing deter me.

TRHH: When I hear your voice it reminds me of Nine, have you heard that comparison before?

TRHH: Have you heard of Nine?

M Doc Diego: I haven’t heard of him. I’m going to look him up though since you said it.

TRHH: Really? Okay. How old are you, man?

M Doc Diego: I’m surprised I never heard of him. I grew up listening to Kool G Rap, Biggie, Nas, and of course Wu-Tang.

TRHH: His big record was called “Whutchu Want?” look him up.

M Doc Diego: I will look him up for sure.

TRHH: What’s next up for M Doc Diego?

M Doc Diego: Like I said, once I dropped this project producers hit me up. This producer named Dray Yard who worked with Jamal Gasol and other underground artists as well, I put a verse on his project, so look out for Dray Yard. Me and ManZu Beatz are still pushing Universal Tongues and we’ve got more visuals for that. He already hit me up and said we’re going to try and do another one as well, so, be on the lookout for that. Masta Conga is from Paris and I just dropped a project called “French Connection” with him as well. I’m also working on my own music. Since I’ve got all these producers sending me stuff I’m probably going to fall back and drop a few EP’s and at the beginning of next year I’ll drop my album then. I’m definitely working, for sure.