M-Dot: Ego and the Enemy 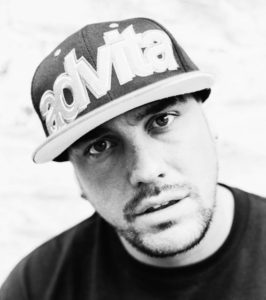 Massachusetts emcee M-Dot loves the art of rap. His passion for the game is evident in his lyrics and in his visual creations. Over the better part of the last decade the Boston Music Award winning rapper has stayed busy with tons of features and a handful of mixtapes in preparation for his recently released solo project, Ego and the Enemy.

The Real Hip-Hop spoke to M-Dot about his new album, Ego and the Enemy, what it was like working with classic producers, the long process of creating the album, and part two coming in late 2017.

TRHH: Explain the title of the new album, Ego and the Enemy.

M-Dot: Ego and the Enemy is exactly what it sounds like. Ego is the enemy. Self-pride, over confidence, insecurity, there is no competition, it’s just you versus you. At the end of the day you’re really born alone and die alone in so many ways. The other people that you think are competition, that’s fabricated. I’ve used that my whole life. I’ve created chips on my shoulder. I’m from Boston where we have a lot of really good emcees, a lot of really good producers, and deejays. It’s a crabs in a barrel type environment because we’re not New York. New York is the home of Hip-Hop and we’re like right there – three and a half hours away. It’s dope, we do our thing, but we never really had a humongous industry artist. Edo.G sold a lot of units in the early 90s. Guru of Gang Starr, people thought he was from New York because he moved to Brooklyn. We haven’t had too much mainstream success.

That’s not necessarily my lane, but that’s where a lot of the chip comes from with me always feeling overlooked and left out. I kind of like it because it’s something I fed off of and built off of. I kept it low-key to myself and used it as fuel. I almost encouraged it in some ways – staying cool with everybody but at the same time feeling left out. “Why am I not on that album? Why am I not on that show?” Ego and the Enemy, man. Also, “M.D.O.T” is inside of that title. Each letter once, which is really creepy, too. Ego is part one and Enemy, which is already recorded is part 2. It’s coming out later this year. The first is pretty heavy with the lineup and the second one is just as good. Method Man is on it again, Large Professor is on it again, and Marco Polo is on it again. We want longevity and success. We’re gonna hit ‘em with the left, the right, and the uppercut – stay down [laughs].

TRHH: My favorite song on the album is Dreamscape. What was it like working with Marco Polo for that song?

M-Dot: I love that song. I like his drums in general. It just sounded like an evil song. The album has a lot of evil undertones to it. I just kind of zoned out. I’m sure you caught it but there is 64 bars – 32 bars in each verse. That’s four verses. I couldn’t stop writing. I was like, “Yo, can you set it up to where you set it to 32 bars?” and he was like, “Yeah.” He chopped it up and set up the lay out of the record. I just had these weird dreams and shit. That’s not a joke. I was pissed being left out and was like, “This is what you want? You want me to talk about shooting people? You want me to talk about killing people? Is that going to get you to buy the album?” It took a lot of dark feelings to bring that shit together because I’m not really somebody that talks about that type of stuff. It’s a dream, it’s not me saying I’m going to shoot anybody or kill anybody. I don’t promote that type of stuff – it’s not my M.O. I’m more blue-collar, an everyday regular person. I got three kids. I don’t promote violence. That’s a dream and something I had to get out of me. It felt good getting it off my chest. It’s one of my favorite tracks too, by the way.

TRHH: I remember hearing the song Shine with Meth and Dominique Larue a long time ago. How long did it take you to complete this album?

M-Dot: Man, start to finish? There’s some records on it that are 4-5 years old and there’s some records on it that I did a couple of months ago. The last three months I banged out the Hi-Tek song, the Snowgoons song, and the Marco Polo song. I saved all the big dogs for the end. The Large Professor song was one of the last tracks. He sent me some beats when I was wrapping up the album. 911 was originally going to be an album track with me and Sean Don. We had Es-K who produced it, he’s a dope producer, but that album never came to fruition. We didn’t finish it. Everyone did their parts but life stuff happens. I had another kid, and we didn’t end up finishing it. I love that song so much. I felt like it would be a perfect closer. All of the tracks have an alignment. I was recording that at the same time as Death to Raquel. They have an ebb and flow to it. At first it starts out dreamy and dark, then it gets a little light in the middle, and then it gets back to that dark place at the end like a roller coaster.

Shine took a while to do too, man. My homie DC sent me that. I laced my verse and said, “Yo, can I use that for my album?” We didn’t acquire Method Man on anything monetary, that’s Method Man. We just had to get his permission. He laid a couple verses. It was DC’s song but we got the permission. It took a long time, but we got the OK and let it fly like two years ago as a single. We couldn’t sit on that any longer. A Method Man song? Especially a song I think is dope. It’s not just a feature. It’s a good song. A long time, man, but I’ve been doing other projects. I put out mixtapes, I’ve been doing other music, but I’ve been stashing these records. Mind you, we have that other CD pretty much recorded unless I add other tracks to it. We cut 20 songs from this CD. It was a planned attack – strategic.

TRHH: How was doing this album different from doing Run MPC?

M-Dot: That was a feature-heavy album. I’m not really about features. I want the best producers. I want dudes that have produced on Biggie, Nas, and Jay-Z albums and that’s what this album is. Buckwild produced on Volume 1, Big L, D.I.T.C. Hi-Tek produced several records on the G-Unit album and Anderson.Paak. Large Professor did three beats on Illmatic. I wanted classic producers. Marley Marl, dog? That’s like the inventor of Hip-Hop. Run MPC was different. It was a lot of sending stuff because my man lived in France. That’s the biggest difference I can say. This was more like in the studio. There were so many verses on that album, but this is mostly just me. Verse, chorus, verse, chorus. There’s like four songs with features out of 17 at the most.

TRHH: The video for Give it to Me was dope. What was it like filming that?

M-Dot: Man that was so much fun. It was crazy weird too because I had a camera strapped to me. It looked like a pelvis camera. It was coming out of my crotch and like six feet in front of me. There were seven GoPro cameras wrapped around it and I’m walking through Oakland and San Francisco. It was dope. Shout out to my man Vic Keys. We planned that video for a long time. We went out to Cali for some shows and a radio interview in San Jose and we just kept on shooting. We dedicated a whole day to shooting and the other days we just shot some shots. We shot whatever I was doing. As they say out there it was “hella” fun to shoot. We were just having a blast. We got to go to G Coop’s studio. That’s my homie. He produced I Got the Keys for Jay-Z. That’s my man now. I met him through Victor Keys the director. That’s my dude now and he’s producing on the next album.

TRHH: Regarding the next album, you said did 20 songs for and it sounds like you have some more stuff in the making. When do you hope to drop the second part of Ego and the Enemy?

M-Dot: I’d like to have it by November. I’m a winter dude so that would be kind of dope. My birthday is in January. November would be kind of dope. It would give me enough time to space out these two albums. I’m probably going to cut a lot of those songs too and do some different shit. That’s the plan, to keep the momentum moving. We still have 4-5 videos in the can that we’re just sitting on. We’re trying to be forever. Lasting, something that’s special, something that people study, something that people appreciate on every level from the art, to the video, to the music.

TRHH: What do you hope to achieve with Ego and the Enemy?

M-Dot: I just want people to hear it. That’s it, real talk. If people give me a fair shot I think we’ll get even more respect. We were number one on UndergroundHipHop.com in sales in six days. We had the most sales in six days compared to anybody over the last thirty. There’s some good albums like Run the Jewels, much respect to them. That’s some crazy stuff, I didn’t know people still bought CD’s like that. That’s a trip for me. We’re trying to get more awareness to this music.

Purchase: M-Dot – Ego and the Enemy

Sherron Shabazz is a freelance writer with an intense passion for Hip-Hop culture. Sherron is your quintessential Hip-Hop snob, seeking to advance the future of the culture while fondly remembering its past.
View all posts by Sherron Shabazz →
This entry was posted in interview and tagged Boston, Dreamscape, Ego and the Enemy, Ego and the Enemy part 1, Give it to Me, interview, M-Dot, Massachusetts. Bookmark the permalink.