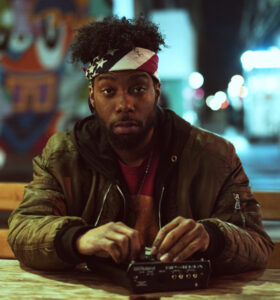 Sakura Anpan is a Japanese sweet roll made with bean paste and cherry blossoms. It’s also the title of Bronx emcee Mike Larry Draw’s latest release. In a press release for the album Draw stated that “Sakura Anpan is a tasty album….But there is nothing sweet about it.”

Mike Larry Draw spoke to The Real Hip-Hop about finding his confidence, the most rewarding aspect of his art, and his new album, Sakura Anpan.

TRHH: What’s the meaning behind the title of the album Sakura Anpan?

Mike Larry Draw: I’m very heavy into Japanese culture. One of my favorite pastries from Japan, or even from around the world, is from Japan. It’s called a sakura anpan. Sakura means “cherry blossom.” They make this pastry and they put cherry paste in it and it tastes so amazing. Me and the producer of the album decided to name it Sakura Anpan because we wanted it to be a tasty treat for what’s coming next.

TRHH: “Nice Pants” is my favorite song on the album. What was the process like writing the song and trading verses?

Mike Larry Draw: I’m not going to lie to you, I get really excited to talk about that. I like trading verses with other emcees because skill sharpens skill. I really enjoy the process of just hearing how someone delivers a following bar and they deliver it in a way that I wouldn’t deliver it. I always find that to be exciting. I also will say it was probably one of the more fun tracks to do on the album just for the fact that I get to trade bars with my friends. So, the first person that actually assisted me was James Liôn. I had the hook already done and I hit him up like, “Listen, I got this track. I never get the opportunity go back and forth, so let’s do this on this album where I go back and forth with you.” He was like, “Cool!” Same night, too. He had a setup and I had a setup. I wrote the first couple and sent it to him, then he did his part and sent it back. We did that for obviously a lot of bars. I called my boy Supe and the same thing, same night, back and forth. That’s how it came about. Backstory, I approached ManKind and they didn’t get back to me quick enough, so I hit my other boys up and they really did justice. It’s one of my favorite tracks too as well.

TRHH: The video for “No Choice” was very original. Who came up with the concept for it?

Mike Larry Draw: I came up with the concept. I’m not impressed anymore with a lot of the music videos that come out. I understand that everyone wants to be cinematic now, fast cuts, and all of these random effects that happen in a music video. I appreciate it, I really do, but I’m bored of it. It’s the same thing over and over again – the same shots. I wanted my music video to be multi-cultural. In other countries people watch things like slow TV. What slow TV is legitimately watching someone take a train from Tokyo to the west side of Japan. You only see the front of the train and you get to see nature or maybe someone is kayaking on a river and all you see is the front of the boat and people watch that all day.

I said, “You know what? How about if I create something similar, but in a way that no one has ever seen it before?” In the hood people roll dice. If I was an onlooker and I had the opportunity to watch someone roll dice I would sit there and watch. I wanted to paint that perspective for them and I wanted it in the perspective of if they were the wall and they see the dice coming towards them and the environment where they’re rolling dice. The person that actually helped me film it, because I was actually in the scene, is a good friend of mine who guys by Adam Muro. He’s a director/photographer and somebody that I usually go to when I do direct and I’m not holding the camera.

TRHH: You wear a lot of hats – emceeing, producing, designing, and directing. What do you find the most rewarding creatively?

Mike Larry Draw: I think it depends on the time of day. One day I can wake up and want to make beats all day, then I’ll get the writers bug and be like, “Ah, man. I’ve been sitting on this beat for a year and a half/two years. It’s time to really write.” The thing that I find the most rewarding is the process of making an album, just because it’s a body of work. It’s full to me. It gives people the opportunity to find out who a person is. In this business everybody has to know you in a sense to get to where you want to go to, depending on what your goal is.

I love the process of making an album. I’m always challenging myself, I’m always tapping into that conscious stream. I’m making my life timeless as I’m creating this piece of art. That goes into mixing, mastering, creating an instrumental, fine tuning certain sounds, or even just doing the art piece for it or figuring out how I want to deliver the package. I imagine them grabbing the package and saying, “Yo, this is different.” The album part is definitely my favorite.

TRHH: I’ve seen pictures of you with the 404; what else is in your production workstation?

Mike Larry Draw: When it comes to production I have a Keystation 49 – it’s an M-Audio. Just something basic. I have a Tascam Model 12, a computer where I use Logic, and Wave plugins. That’s basically it when it comes to production. The speakers that I use are Kali’s. I use those because I feel like they’re the closest sounding to Yamaha’s without breaking bank. I’m very basic considering the fact of where I’m at and I’m still going to be moving around. Even the place that I’m at right now is not my permanent place to live, so I didn’t want to go all out yet, so I kept it really basic. That’s basically the gist of what I’m using.

TRHH: In the song “In Turn” you speak about not feeling accepted in your old crew. How were you able to persevere and not lose sight of your goals?

Mike Larry Draw: To persevere I have to believe in myself. I have to be very confident. To be very confident is to understand who you are as a person. Stubbornness – you have to be stubborn about what you believe in. You have to really dig in deep and understand what you’re looking at, what you’re smelling, and what you’re hearing. I grew up always an outcast. I’ve always been an outcast since I can remember. I’ve had friends, but there are moments where everyone pushes away. I’ve always had that. I kind of started an early process in my life where there is a phase that you go through, almost like a breaking point. In that breaking point you say all the negative things you can ever say to yourself. In that breaking point there is a glimpse moment where you tell yourself, “But it’s only going to get better from here.”

It’s only going to be exactly what you want it to be. If you don’t tell yourself that and no one else is telling you that, you lose. My dad always told me to be a leader, not a follower. So, I had to lead myself out of these moments. Music helped a lot. Art always helped, always! That was like therapy. Once I got to the point of hearing one person say, “Oh, that shits dope” I grabbed on to that. If one person said it, it’s a wrap. Whoever else says something negative or even implies that what I’m doing is wrong or can’t be done, I’ve already been at the worst, the bottom of the darkest pit of myself and I climbed out of that, there is no way anybody can say anything otherwise.

TRHH: Did you always have that confidence?

Mike Larry Draw: No. Like I said, I started in a dark place early. My first memory of being somewhere dark was being nine or ten when my mom and dad split up. My mom went to New Jersey, my dad stayed in the Bronx. My mom was a single parent and I did not have friends in the place that I was at because I was different. I’m from the Bronx, I had a different accent, I different process of life. I was a tad bit arrogant because the people I was around were all confident and laughing, joking, and being silly. The place I was at wasn’t silly. It was very bland. Once I realized that, that wasn’t my tribe and my tribe was in the Bronx I actually got the opportunity to move back to the Bronx and rebuild myself, that’s when the confidence took off and never swayed at all.

TRHH: You have some upcoming shows; what do you have in-store for those events?

Mike Larry Draw: The first one is August 27. It’s a beat show in Troy, New York at this place called Whiskey Pickle. It’s going to be a beat set. Just straight beats and mashups that I created. The second show is September 24 in Brooklyn at this place called Freya Brooklyn. It’s going to be a beat set with some verses, some joints, some deep cuts. I will say the focus is mostly the beat set, for the simple fact that I’m bringing that Boiler Room vibe to people that they’ve never had the opportunity to indulge in. I’ve done a lot of beat sets in other places, Japan, Vermont, a lot of upstate New York stuff, Atlanta, L.A. All of these other places have had the opportunity to hear me go crazy when it comes to production for hours — like a DJ set. No one has seen this epic DJ set – I’m going to call it a DJ set – J Dilla style vibe. I want to bring that to the city and let people get an opportunity to feel that in my hometown.

TRHH: Who is the Sakura Anpan album made for?

Mike Larry Draw: I believe the Sakura Anpan project is made for the heavy-hitting lyrical heads. Even if you weren’t feeling the lyrics you were bopping your head to the beat. Sakura Anpan was a vibe on when I used to listen to the radio. The “Streamlights” song, even though it’s modern I felt as though it would tastefully be your favorite if you heard it on the radio. “Taste” is a provocative song, but it’s simply, easy, catchy, and it’s a sellout vibe. You can vibe with it and be okay. But yeah, it’s really for the heavy-hitting lyrical heads. It for those that want to feel dirty in their car with the tints. Even though they’re not about that life they can feel a little bit of it. It’s that, “Yo, what’s after that? Okay, put The Lox on. What’s that after that? Yo, put that Mike Larry – Sakura Anpan on right after that.” It’s that Wu-Tang. That’s how I feel when I’m listening to it.

Sherron Shabazz is a freelance writer with an intense passion for Hip-Hop culture. Sherron is your quintessential Hip-Hop snob, seeking to advance the future of the culture while fondly remembering its past.
View all posts by Sherron Shabazz →
This entry was posted in interview and tagged Bronx, DatBoyGrand, In Turn, interview, Mike Larry Draw, New York, Nice Pants, No Choice, Sakura Anpan. Bookmark the permalink.