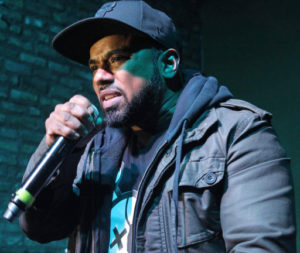 Chicago emcee MZM has returned with his third solo album, titled “FOH.” For those who are unfamiliar, the acronym stands for “fuck outta here,” a saying indicative of MZM’s feelings toward many of his peers in rap. FOH is a 15-track album with various musical stylings to cater toward every type of listener.

The Real Hip-Hop spoke to MZM about why he wants to bridge the generational gap in Hip-Hop, the dark history of the United States that’s purposely kept quiet, and his new album, FOH.

MZM: Fuck outta here has been my sentiment toward the direction of rap and Hip-Hop in general. It’s just been a lot of BS and also if you go back to the local Chicago scene it’s a lot of crabs in a bucket. Everybody wants to out-do everybody, but nobody is in a better position to do so. We’re both stuck in the same boat. We’re all a bunch of bums. We’re in the same boat so there’s no need for the ego. Stop acting like you’re better than us, because you’re not. I’m not better than you, you’re not better than me, we’re both in the same rut. Then there is a whole lot of talk. Everybody wants to talk about how they wanna work and woo, woo, woo, but when it comes time to work all of a sudden no one is there or it’s 101 excuses. So, fuck outta here!

TRHH: Are you done with trying to collab with people in the city?

MZM: No, not at all. I will be selective with who I want to work with. The sentiment toward where things are is fuck outta here. There’s still some people that I will always work with that I consider family. Those cats I will continue to work with, but until people at least change their attitude, yeah. I’m not talking about just recently. I’ve been on the scene since back in the 90s. I had two albums back then. I had a little hiatus, but even coming back off that little hiatus it’s the same bullshit now. Where’s the progression at? Don’t box me in. Don’t put me in a box, fuck outta, Im’ma do me.

TRHH: You have Rock from Heltah Skeltah on the title track. How’d that song come together?

MZM: I was thinking of what I wanted to do with that beat. My verses started to come and then I thought I needed somebody else. I thought about who I would want on it. At this point Rock had dropped his album. I was listening to his album and it hit me. His tone, his direction, and the way he carries himself – I couldn’t think of anybody better for a title called “Fuck Outta Here” than him, so I hit him up. Initially I had a few other beats. I was thinking of going with a different beat. I decided to stick with that one and it just happened.

TRHH: You pride yourself on not being put into a box and FOH is an example of that. You have boom bap, trap, and relationship songs on there. Is that something that you go into a project purposely doing or do you let the beats guide you?

MZM: For this one I purposely went in. The tone starts with the first single. The first single is called “Old Head” and if you heard it there’s three verses on it. The first verse is just my thoughts of me being considered an old head, the second verse is a conversation for younger heads, and the third verse is a conversation for the old heads. Everybody is mad about the direction of Hip-Hop, but we had a hand in where it’s at. We’re partly to blame for the way that it is now. To the young heads, this is our culture and I know how you feel because when I was younger a lot of the OG’s said the same thing about me. They said I was insubordinate. I understand how they feel so I’m just trying to bridge the gap here between young and old. So basically, that set the tone for the remainder of the album.

Every single song on there is true to me. It’s true to my musical taste and my preferences. I didn’t compromise my own integrity, but at the same time I wanted to bridge that gap. This is my best attempt at being able to do so. I would go as far as calling it a classic, because it’s extremely well-rounded. I know some people have had mixed feelings because some hardcore boom bap heads are like, “I don’t fuck with so and so because you got this new trap shit.” You know what? You’re missing the point of the whole album. We’re trying to bridge the gap instead of creating this separation between the new generation and the old generation. Keep in mind, Hip-Hop is not old as a culture. It’s not old at all. It doesn’t have the same longevity as other genres of music. Hip-Hop is still relatively new. We’re probably the second or third generation of old heads. Rather than creating this divide, why not try to push the culture forward and try to bridge that gap? That was my premise behind it.

TRHH: On the last verse of “Old Head” you point the finger at the older generation for the current state of rap. In your opinion, what could have been done differently to keep the new generation on course?

MZM: It goes to more people that are considered influences – the radio DJ, the bloggers, and all those people who are still relatively in the same age group as us, but they started to go toward whatever they thought was more pop because it was bringing in more revenue at whatever time. I understand that the record labels aren’t as invested in the culture as the people in the culture. They’re invested in the dollar signs. So when they’re saying, “Why don’t you try doing this or that,” somebody could have pushed back. People were so blinded by finances that nobody bothered to push back. A lot of records were getting spun off payola. If some people said, “Nah, this is where the sound should be,” instead of bending to the record labels and what direction they wanted to go if they wanted to keep making a certain sound. At the end of the day it’s all subjective. Somebody else might disagree with me.

TRHH: On the song “Vespucci” you talk about the dark history of America. Why do you think so many people are resistant to hearing the truth about the blood on this country’s hands?

MZM: Man, I like that song. If you go into history and you think of World War II and what the Nazi’s did, one thing they do in present Germany is they actually own up to their shit. They teach their kids the dark history, whereas in the U.S. history books are skewed. There are things that are edited and kept out versus in Germany they tell the kids, “Hey, this is what we did in the holocaust. We fucked up. We tried killing so and so.” So, people own up to it. They actually acknowledge, “This is what we did in the past, now let’s try to not do it.” Whereas in the U.S. the agenda is a little bit different. With the current climate of things, it’s like, guess what? What if America was an actual human being? We’re not talking about the actual citizens, we’re talking about the country, foundation, the government, what if all of that was a person? What would that person say to other people? That’s where Vespucci came. I had to add that background layer on the vocals to give it a more demonic feel to it. I have to be clear that that’s not me talking, that’s America talking and America is a person.

TRHH: The last time we spoke you said the new album is either going to wake people up or you’re going to make some enemies. Do you think you’ve accomplished that?

MZM: There are some people that would probably question, “Can this cat spit? Can he rap?”  I think I answered that question here. Some people may disagree with it. If I had to say I was making enemies in that sense that would be fine. As far as waking people up, I think I would do that. With some of the other songs that are gearing toward a different feel with more current type music, especially the old and die-hard heads who consider themselves uber-rap purists, it may not click with them. They’re not going to resonate with it, but then again at that point they’re missing the point and the direction, which is trying to bridge the gap. As far as making real enemies, I had some other songs I had to leave on the cutting table. At the end I thought they needed to be kept off the record for now. I’d probably say I’m not making as many enemies as I felt back then.

TRHH: Who is the FOH album for?

MZM: Man, you never seen that? They’ll be singing the most disrespectful trap lyrics. The 90s babies, man. That’s who “Trabajo” would be for. Then you have people who are on their woke shit, there’s “Vespucci.” People who want actual stories you have “Janitor’s Son” and you have “Never.” If you want some hardcore rap shit, “Ski Mask Season.” If you want some gutter Chicago style shit, “On One.” My personal favorite, if you want some rappity rap to rap your ass off, “The Lowdown.” There’s like four different beat change ups and each time my cadence is adjusting to that beat. To answers your question, I think it’s for everybody if you have to consider this day and age where people are not consuming an entire album, people are just getting songs. With that everybody can pick and choose.

Sherron Shabazz is a freelance writer with an intense passion for Hip-Hop culture. Sherron is your quintessential Hip-Hop snob, seeking to advance the future of the culture while fondly remembering its past.
View all posts by Sherron Shabazz →
This entry was posted in interview and tagged Chicago, FOH, Illinois, interview, MZM, Old Head, RPVE, Vespucci. Bookmark the permalink.