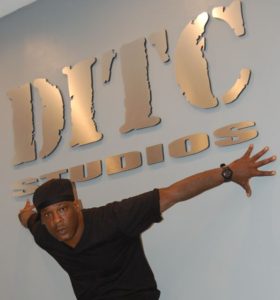 In 1994 O.C. came onto the scene with the hit single “Time’s Up.” The song was filled with so many quotable lyrics that have been repeated and sampled to this day. O’s debut album Word…Life followed and solidified him as one of the best lyricists in the game. Twenty-three years later, with numerous solo and group efforts under his belt, O.C. has returned to unleash a new chapter in the O.C. story, Same Moon Same Sun.

The Real Hip-Hop spoke to O.C. about working with his Diggin’ in the Crates crew, the importance of knowing your worth in the music industry, and his new album, Same Moon Same Sun.

O.C.: It’s self-explanatory basically. We all live under the same moon, the same sun. Everything that goes on under the moon and the sun happens with everybody. I just left it open for people to interpret it the way they want to interpret their life.

TRHH: Why did you release this project for free?

O.C.: Me and Showbiz felt it was necessary. We’re into this thing of re-branding D.I.T.C. It’s been quite a long time between albums. The Worldwide album was in 2000 as opposed to the D.I.T.C LP that came out last year. I’m just letting people know that we not playing. We really never left, we just wasn’t putting out an abundance of music. We just wanted to get people back in the mix and let ‘em know we appreciate them, so why not give it to them for free?

TRHH: I saw you speak recently and you talked about how cats from your era take less than what they deserve as far as shows and stuff like that. Why do you think that is and how do you think cats can change that and get more of their worth?

O.C.: It’s a thing about your self-worth. People don’t realize, and I’m talking about myself, including D.I.T.C music I put out 17 albums. If you google my discography and really do your research my stock is what my worth is. I just feel like a lot of people shouldn’t let other people determine what their worth is. An example is promoters will get at me and throw names at me and I’ll just tell them, “Call ‘em back because I’m not doing this for that.” My worth is everything to me.

TRHH: I saw you perform in 97’ right after Jewelz came out at a little bar on the north side of Chicago and you were incredible. How much pressure was on you to deliver after Word…Life and do you feel like you came through with Jewelz?

O.C.: Thank you, brother. It wasn’t more or less pressure in a sense that I knew I couldn’t do it again, it was just the excitement type of pressure trying not to repeat what I did prior to that, meaning Word…Life. Trying to give people growth, this is what being an artist is about, growing. I get quite a few people saying they want Word…Life again but I can’t give ‘em that. That was a moment in time that just can’t be captured again. I was just looking forward to the excitement of people seeing what I was coming with for the next project, and excited for myself as well.

TRHH: Last year D.I.T.C. released the Sessions album and you did a lot of heavy lifting on that joint. What was it like recording that album?

O.C.: It was dope, man. For a long time as a collective we were all in one room. This includes Fat Joe with his busy schedule. Just being in the room together brought back nostalgia. It just felt good. For the most part we did most of the album in the studio. You have a few members that live out of town or out of the country. We tried to do as much as we can together as possible as opposed to e-mailing something to somebody from the beginning. We did the bulk of the work in the studio. Whatever we couldn’t finish or needed to be finished if somebody wasn’t there physically it left us no choice but to send it to ‘em. So if we had to send something to Joe, Diamond or AG that’s how it had to be done. For the most part it was dope, man.

TRHH: On the new album you have a song called “Real Life” that speaks on Big L’s passing. Was it difficult for you to write such a personal song?

O.C.: It was difficult to put it down and give it away so to speak. It’s something I’ve been holding on to for over 15 years. It wasn’t as difficult to pen it, but it was difficult to share it with people. It was just time, man. He’s gone physically. He’s not gone in spirit. People know who Big L is but I felt like for me it was time to let go and share it with the people. Share the experience of what actually happened that night. Everything I wrote about has always been in my head. It more or less took Showbiz by surprise because he was the one that gave the call to everyone on the actual night that he got killed.

He was on his way somewhere, made a U-turn on the George Washington Bridge, called up Joe and him and Joe went down to Harlem and physically seen him under the sheet. He confirmed it and locked it away. When I brought it back up it was like, “Wow, that’s what happened?” and I was like, “Yeah, you’re the one that put the call in.” He tucked it away but I didn’t. I tucked it away but it was like yesterday for me so it’s always been there I just had to put it in word form.

TRHH: I loved the Trophies album you did with Apollo Brown. Will we ever hear a follow-up to Trophies?

O.C.: You’ll have to ask Apollo about that one.

O.C.: Yeah, it’s not even up to me. It’s up to him. If it happens, it does. If it don’t, we got one in the tank and it’s in the history books and I’m good with that. If we could work something out it would be dope, I’m sure.

TRHH: I know Same Moon Same Sun is just the first chapter, what can we expect to hear on the next installments?

O.C.: It’s actually two more installments that are coming through. Part 2 is called Same Moon Same Sun: Road to Peridition. It’s a journey. You’ll have to really hear what I’m doing to get a grasp of it and probably refer back to the first album. It’s like a big puzzle. A big story of a life journey. Part 2 will probably be in the end of May/early June. The third part, which will be the final installment will probably be before 2018 comes in. All those albums we’re gonna do the same format because we really believe that without the support we couldn’t do it. I don’t like calling people fans, I think fans will turn their back on you but with a support system if they don’t like something they’ll still hold up and give you that benefit of the doubt.

We feel like the support system deserves consistent music from us and whatever way we have to give it we’ll give it to ‘em. At the end of the day we’re giving out the projects on the D.I.T.C website, but it’ll probably be less short lived as far as being free on the second and third one. We’ll probably take it down after a short while and put it up. A lot of people were asking to buy it on iTunes, Spotify, and Amazon. I understand that in these days and times people wanna put it on their phone or their computer and not actually want the CD. We actually have CD’s and vinyl, too, for the purists. We’re just trying to accommodate everybody, man, and just give back at the same time, too.

Sherron Shabazz is a freelance writer with an intense passion for Hip-Hop culture. Sherron is your quintessential Hip-Hop snob, seeking to advance the future of the culture while fondly remembering its past.
View all posts by Sherron Shabazz →
This entry was posted in interview and tagged 1st Phase, Brooklyn, D.I.T.C, D.I.T.C Studios, Diggin’ in the Crates, Good Man, interview, New York, O.C., Real Life, Same Moon Same Sun, Same Moon Same Sun: 1st Phase, Slice of Spice. Bookmark the permalink.