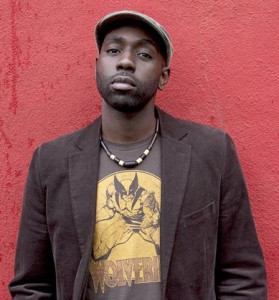 In the middle of 2014 New York based production duo 2 Hungry Bros. linked up with emcee, P.SO The Earth Tone King to craft a 6-track EP titled Feast of Legend. The critically acclaimed release on HiPNOTT Records was produced entirely by 2 Hungry Bros. and featured appearances from Tanya Morgan, Substantial, Likewuid, and Kevo.

The Earth Tone King and his hungry comrades are back at it again with the upcoming release of a new politically charged singled called “American Apartheid”. The serious single serves as the set-up to the trios sophomore project, Paleo.

P.SO The Earth Tone King spoke to The Real Hip-Hop about working with 2 Hungry Bros, their album Feast of Legend, and his new single, American Apartheid.

TRHH: How’d you link up with 2 Hungry Bros. to make Feast of Legend?

TRHH: What’s the meaning behind the title Feast of Legend?

TRHH: Who came up with the concept for the Fire in the Hole video? It was hilarious.

P.SO: [Laughs] 2 Hungry Bros. is Ben [Boogz] and Deep. Deep went to a chicken wing spot and saw some chicken wings that were called “fire in the hole” and that’s where the concept came from.

TRHH: Tell me about the graphic novel, The Gateway to Greatness.

P.SO: I’ve been a comic book fan since I was 8-years old. Ideally when I came up with the Gateway to Greatness album I wanted to come up with a graphic novel as well because I’m a writer. I don’t just write music, I write stories, I work on film scripts, and things like that. One of my good friends Anwar Morse is an amazing illustrator so we collaborated together to work on this graphic novel. We released it with the album together. It basically came out of me being a fan of graphic novels and comic books. Deep and Ben are big comic book fans. We read a lot of comics so we had to put a comic into our music somehow.

TRHH: How is writing a graphic novel different from writing rhymes?

P.SO: Wow, you have some good questions, man. You did some good research – on point.

P.SO: Writing rhymes is a freedom of expression. It’s poetry so however you feel is how you write. It’s almost like writing in a journal or a diary. Whatever you feel in your heart, whatever emotion you want to express, you express those through rhyme. It’s a piece of your soul that you’re putting onto the paper. Writing stories is completely different. That’s a story. You’re making it up. You’re creating a story, you’re creating an idea, and you’re creating a character. When I write a story it’s not me, when I write music it’s a part of who I am. That’s the distinction between the two.

TRHH: Do you view emcees who write as characters in a different way?

P.SO: A lot of artists create a persona. I’m not gonna front, sometimes I might exaggerate some things or embellish. But for the most part I’m on par with who I am. I know artists who create personas and characters. That’s something that I’m interested in doing. I might do an album where I’m pretending to be someone else or something else, but right now my music is a more expressive version of myself. My Hip-Hop version of myself is not exactly who I am in real life but it’s a more expressive version of who I am.

TRHH: When the last Star Wars film dropped you released Star Wars for Dummies. How’d that song come together?

P.SO: The whole idea was I wanted to do something different. I was dealing with a lot of issues because I was writing songs and was wondering, “What can I do to stand out that’s going to be relevant and exciting?” I basically thought we needed to make a song that was more caught into pop culture and relevant to what people are experiencing today. The whole Star Wars thing was crazy. Star Wars has been huge so I decided to write a song about it. We’re probably going to do that more because the Star Wars song actually did really well for us. I was going to do a song about Daredevil and eventually do a song about Game of Thrones because those two shows are really popular.

TRHH: Tell me about the new single.

P.SO: The new single is called “American Apartheid” and it’s from my new EP called Paleo, as in Paleozoic. The whole idea behind American Apartheid is we’re living in very tumultuous times. There are a lot of crazy things going on in society and in culture. I haven’t really been super-sensitive to it all so I felt like I needed to make a song that talked about my struggle as a human being, a black man, and a person living in America. American Apartheid is completely about that. This new EP is completely produced by 2 Hungry Bros., just like Feast of Legend. This one is going to be a lot of fun.

Sherron Shabazz is a freelance writer with an intense passion for Hip-Hop culture. Sherron is your quintessential Hip-Hop snob, seeking to advance the future of the culture while fondly remembering its past.
View all posts by Sherron Shabazz →
This entry was posted in interview and tagged 2 Hungry Bros, American Apartheid, Fire in the Hole, HiPNOTT Records, interview Feast of Legend, P.SO, P.SO The Earth Tone King, Paleo, Star Wars for Dummies, The Earth Tone King, The Gateway to Greatness. Bookmark the permalink.