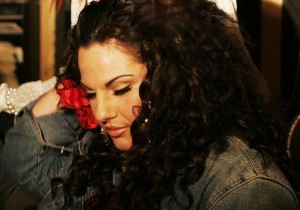 Far Rockaway, Queens emcee Persia came onto the scene as a contestant on ego trip’s The White Rapper Show. Since then she’s grinded hard. The brash beauty has had several guest appearances, dropped a handful of videos, and released a couple of mixtapes to spread her music to the masses.

Persia’s most recent release, The Love Tape is a departure from the hard hitting rhymes that we’re used to hearing her spit. The Love Tape takes a look at love, lust, romance, and relationships from a lady’s perspective.

The Real Hip-Hop chatted with Persia about her time on the White Rapper Show, her foray into battle rapping, her upcoming project ‘Crown on Tilt’, and her latest release, The Love Tape.

TRHH: Tell me about The Love Tape.

Persia: The Love Tape happened by accident. I was working on the Ruby in the Rough tape and when I listened to the final product it sounded less “rough” and more “love”. Not necessarily love but relationships – good, bad, ugly. So I decided to scrap the tape and split it up into two tapes.

TRHH: So what’s the second tape?

Persia: The second tape is ‘Crown on Tilt’ and that’s coming out on March 15th.

TRHH: A lot of the songs on the album sound angry. Is it safe to say love makes you angry?

Persia: [Laughs] I think the tape starts off angry. I didn’t do that purposely. It just kind of sonically went that way. Toward the end of the tape it’s more about love and meeting a good guy. I think it just starts off kinda rough.

TRHH: You think that’s usually how it goes? Relationships start out rough and you end up with “the one”?

Persia: No, not necessarily. I think that’s just the way the tape sonically meshed. I could have put it in relationship order, and then it would have just been a different order.

TRHH: Are any of those songs from real life experiences?

Persia: Everything is from some part of real life. I’m sure there are a couple people put into one song. The songs aren’t about people, they’re just about situations. But everything on the tape I’ve been through.

TRHH: You got a lot of publicity from your battle with Raine last year. Why did you decide to go that route and what has that meant for your career?

Persia: I did it partly for the money and partly for the promotion. It was a good look to get my name out there on VladTV and Star & Buck Wild. A lot of people are taking to battle rap now because it seems to be a pure form of Hip-Hop that they can’t find in the music. For me it was about the money. I have kids so of course I’m not going to turn down good money. I’m not trying to make it a career move. It’s something I did. I’m not really trying to be a battle rapper though.

TRHH: If the opportunity came up would you do it again?

Persia: I have a battle in April. The circumstances have to be right. It’s not about ego and, ”Oh, I can beat this person,” it has to benefit my music career as well.

TRHH: I didn’t go into it the first time we spoke but I wanted to ask you about your experience on The White Rapper Show. Do you think it was a negative or a positive for your career?

Persia: I think it depends who you ask. Some people will take the negative from it and just dismiss me. Some people will see that I stood out on a negative show. Certain people have said to me, “The show was kind of a joke, but we really saw who you were.” It was more good than bad for me.

TRHH: Do you keep up with anybody from the show?

Persia: I speak to Serch, $hamrock, I haven’t spoken to Sullee in a while, I talk to the producers a lot.

TRHH: Serch, what impact has he had on your career? He’s still kind of out there. Didn’t he just start a TV show or something?

TRHH: To me he’s kind of an example of life after rap. He got out of it but he’s still making money doing other stuff in it. Did he school you on any of that?

Persia: Right, he gave me some advice musically. A few things here and there but I don’t get inspiration from Serch. Certain things that he said to me were very inspiring that stayed with me, but as far as his path, I don’t follow in it.

TRHH: I was watching an interview you did where you talked about the brothel. It surprised me. I never knew about that. How do you go from running a brothel to rapping?

Persia: I don’t know, man [laughs]. I was actually sitting in the brothel when I found the ad for The White Rapper Show. I kinda just wanted to do something different. I grew up in Far Rockaway, I was basically raised in the brothel, and I took over when I was 16. My life was pretty… I don’t want to say normal because it’s not normal to other people, but it was normal to me. I woke up in the morning, went to the brothel, worked all day, and went home. That was my former hustle. Because my business was illegal I didn’t have the freedom to spend my money, go out of town on trips, and things like that – I always had to be there. One of my girls wanted to answer the phones and I said, “OK, I’m going to leave you in charge and I’m going to do something for me.” I wanted to do The Real World but they had just finished casting. I saw an ad that said, “Looking for white rappers, must have personality.” I got personality for days but I wasn’t sure I could rap though. I loved Hip-Hop but I wasn’t sure I could rap. They said to send something in raw so I wrote it and sent it in through an e-mail and I got a call back. I still wasn’t even sure I could rap ‘till I got there and everybody started looking at me kinda funny like, “Where did you come from” [laughs]. I said ok, I must have something. After the show I went to All-Star Weekend to host a couple of parties and the business had gotten busted. I realized that I had to choose and to me it was like God gave me a gift to get out of the brothel. I couldn’t keep one foot in music and one in the brothel.

TRHH: That’s a tough thing to do because it’s bringing you money.

TRHH: I bet you do! I remember Rhymefest saying he was a janitor at an elementary school or something and somebody took a shit all over the wall and he said that was the day he decided to rap full-time. He made the point that you can’t have a foot in both worlds, you gotta go all in.

Persia: I think a lot of New York rappers have one foot into the drug game, and one foot into the music game. I’m spiritual so I feel like God won’t allow you your blessing until you accept your blessing. It was a tough choice. I miss my money something awful but I have to know that sooner or later it’s going to pay off.

TRHH: I’m so intrigued by the brothel thing….

Persia: [Laughs] There is actually footage on me and my mom. We did an interview on 20/20 and I’m still trying to get that footage.

TRHH: Without going into too much detail, what was your role? Was it dangerous? Did you have to protect these girls?

Persia: I basically managed the place. I answered the phones, screened the clients, and brought the clients in — things like that. It wasn’t an unsafe environment. It’s a brothel.

TRHH: How do you screen clients though? How do you know that this dude is not crazy?

Persia: I basically asked them where they worked and I investigated. People are so eager to get money that they’ll let anybody in the door. Me, I told people, “It’ll take me a month to screen you.” Because we were the highest brothel in New York City and the name was so reputable they understood. I’m going to randomly call, I might pop by the office, I might know someone who works in the same office – I’ll ask them.  My main thing was security. I couldn’t go to jail and I couldn’t have my mother go to jail.

TRHH: So the difference in your life now is just the money?

TRHH: How often do you write? Do you write every day or are you the type to get in the studio and write?

Persia: I write at home and I started that way mainly because of the kids. I drop the kids off at school and it’s hard to write when they’re home so whenever they’re gone is when I can write. I have to break out of that. Usually I’ll write a song and run to the studio that week to make sure everything is fresh. I don’t have a rhyme book and stashes of songs. I just take everything by the moment.

TRHH: Talk a little about the other releases you have dropping. I know you’re releasing three this year, right?

Persia: Oh, there is going to be a little more than three [laughs]! I’m working this year. Crown on Tilt is dropping March 15th and hopefully April 15th or May 15th I’m dropping Lordess of the Underground. I’m going to drop another three tapes that I haven’t named yet. I’m trying to get out as much as I can this year. I have a lot of people watching me and a lot of things are happening this year. I need to prove that I deserve to be here. The fact that I can keep pumping out music is not a fluke. I’m not trying to skate by. I’m willing to work and I want people that are watching me now to see that.

Sherron Shabazz is a freelance writer with an intense passion for Hip-Hop culture. Sherron is your quintessential Hip-Hop snob, seeking to advance the future of the culture while fondly remembering its past.
View all posts by Sherron Shabazz →
This entry was posted in interview and tagged Crown on Tilt, interview, Persia, The Love Tape. Bookmark the permalink.