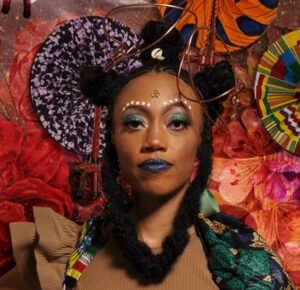 Rita J spoke to The Real Hip-Hop about being a messenger with her music, her company, Oh So Medicinal, working with producer/emcee Neak, and her new album, The High Priestess.

TRHH: Why’d you call the new album The High Priestess?

Rita J: I called the album “The High Priestess” because it’s something that spoke to me. I’ve very tapped into my spirituality, my holistic practices, and whatnot. I feel like the high priestess is like a messenger, a bridge, that guide to help guide you on your path. Through the music obviously I’m spreading a message, so I just wanted The High Priestess to be represented as feminine energy, upliftment, and as a messenger. It’s a very regal and respected position to have to be the high priestess and be doing your thing. I just played with the tarot card meaning and my personal meaning.

TRHH: Do you ever play that role outside of music of being the messenger?

Rita J: I would say yes. I’m an herbalist, I’m a yoga teacher, and I do reiki. I’m very in tune with it on me first, and I branch out and help other people as well. I have a whole business around that outside of music.

TRHH: Is there any way that people can check that out?

Rita J: The business is called “Oh So Medicinal.” I have mostly teas and tinctures on the site. I also sell sea moss and lip balms, just anything I can infuse herbs with and is on the healthy tip. Outside of music, this is what I do to help other people get healthy.

TRHH: How did you and Neak get together and decide to do a full album?

Rita J: Neak had me featured on his album Kwesbaar. We did a song called “Do it For Love.” He reached out to me to do that song. I knew of Neak before that and I was fond of him, but we never really connected. We saw each other at shows and in passing. Basically, after that song we kind of talked and it seemed really easy to work with him. When I went to the studio to record that it was real cool, fast, and straight to it. We talked about doing some music because he’s a producer as well as an emcee.

It was no pressure to come up with anything at that point. It was like, “Let’s connect, do some music, and see what we come up with.” I was kind of kicking some dust off. I hadn’t really put pen to paper in a while. We got in a groove and it seemed simple enough. After that, things started to come together like, “Okay, we have enough songs to put a project together, so, what do you think about that?” That’s kind of how that came. Titles and things of that nature came way, way later. First, we wanted to see how much work we could get done, if we liked it, and if we wanted to put something out.

TRHH: The song “Bussin” has sort of a Paid in Full vibe and is a little bit different style for you. What made you choose that beat to rhyme on?

Rita J: That was one of the first songs I worked on. Neak had that one and kind of tweaked it a little bit. I don’t know, it just had me gassed up. It made me feel like it was one of my come back songs or something. It had a faster pace, hyper, type of vibe to it.

TRHH: One of my favorite songs on the album is “Ai Shadows.” What inspired that song?

Rita J: Conversations that Neak and I were having behind the scenes. A lot of our data is being used against us and the powers that be and the elites are controlling us. Everything has basically clicked over to AI. A lot of things are computerized and work on their own. Shortly it will be mostly robots working and doing all the stuff that humans do. It’s in motion right now. It’s not like back in the day when we used to predict that this would happen in the future, it’s actually in motion. We just kind of played around with the bigger concept, that’s why it’s kind of dramatic and has the soundbites and things of that nature. It’s more so speaking about current day AI.

TRHH: On the song “Feminine Rising” you say “Sums of generations, numb from plantations/Change your situation.” Explain what you mean by that line.

TRHH: I see so many young people who are in my opinion disrespectful of the ancestors. Do you think black people would be in the situation we’re in now if this generation had respect for the past?

Rita J: I think it’s definitely powerful and helpful. It may not fix all the problems and the issues. Definitely, that is what’s missing. We are disconnected from that. I was reading something and some young people were saying that it’s voodoo or scary and making a joke out of it. There was no reverence for actual people that lived, came before you, and are the reason that you’re even here. People don’t know their ancestors’ names or anything. We’re just really disconnected from it. People hold a lot of secrets and then they die and the story is never passed on or told. I think we definitely could tap into those powers to be more powerful, yes.

TRHH: You have a song on the album called “Real Men Cry Too” where you speak about men’s emotions being stifled and in your last verse you provide suggestions. On a larger scale, what do you think it will take to make men, specifically black men, better at accepting and handling their emotions?

Rita J: We definitely need more positive outlets for them. I hear a lot of young people say that they don’t have anything to do. They don’t have anything to get into, that’s why they get into the streets and crime. At a young age we should have programs and extracurricular activities. It would be nice if the parents were involved in the child’s life. It’s so many layers to it. I definitely think it would help with more discipline and structure. Even with jobs, things that are productive in society, these young men need to be doing that. They also need an outlet to just express themselves. Anyone would need that. That’s what I’m using my music for. I don’t have an actual therapist, but music is my therapy.

TRHH: You take a lot of time between projects. Since music is your therapy how do you cope and deal with things when you’re not recording, making music, or performing?

Rita J: It is hard because I do like it and enjoy it, but I also feel like I need that time off to just reflect and live life. I want to gain more experiences. I don’t want to talk about the same things all the time or be coming from the same point of view. I also never felt rushed to do it all the time. I’m just doing it. I don’t look at it like that. I dance – I was doing dance classes. Like I said, I have a whole separate business, so for me yoga is an outlet, teaching other people how to relax, release, and cope helps me with that. Reading helps me with that, being in nature helps me with that. Being creative with arts and crafts with the holistic stuff – I make a lot of things with my hands. I cook. Just other things that I enjoy I do more of. It shifts a little, but it’s pretty much the same stuff that I enjoy doing.

Rita J: Exactly. It’s within you. Everything you need is within you. People always think that they need some outside force or help or person, but it really comes down to you being motivated to do it, disciplined, and doing it. Doing something else. Doing something that would actually help you get out the funk and not keep you in the funk.

TRHH: Who is The High Priestess album made for?

Rita J: The High Priestess album is made for people that enjoy Hip-Hop for one. It is Hip-Hop. It’s totally Hip-Hop. I think it reaches a lot of genres. I’ve had older people like my mom’s friends tell me they enjoy it, down to like a 6-year old. So, I think it’s a vibe and when they get to see me live, in person, or on a video it just brings it more to life. I think people just get creativity out of it and enjoyment from just seeing something different that doesn’t look like what they see on TV all the time. I’m not that image, so it’s a little different. It’s for people that have an open mind and see other artists that are out there besides the mainstream artists.

Sherron Shabazz is a freelance writer with an intense passion for Hip-Hop culture. Sherron is your quintessential Hip-Hop snob, seeking to advance the future of the culture while fondly remembering its past.
View all posts by Sherron Shabazz →
This entry was posted in interview and tagged Ai Shadows, Bussin, Chicago, Family Tree, Feminine Rising, Illinois, interview, Neak, Oh So Medicinal, Real Men Cry Too, Rita J, The High Priestess. Bookmark the permalink.