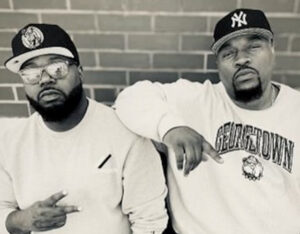 If you’re a fan of martial arts movies you’re familiar with the name Bolo Yeung. In Bruce Lee’s 1973 movie Enter the Dragon Bolo was the muscle for the film’s villain, Han. Bolo was brolic, to say the least. Hip-Hoppers Sean Links and Jamil Honesty titled their album “Bolo Yeung” to liken their music to the martial artists stature.

The Real Hip-Hop spoke to Sean Links and Jamil Honesty about lyrical creativity, making music for fans of 90s Hip-Hop, and their new album, Bolo Yeung.

TRHH: Why did you title the album Bolo Yeung?

Sean Links: I titled the album Bolo Yeung because the beats Jamil was sending me was real bully-like. It drove me to that point to come with those type of bars. Just beats and bars, real bully, that’s all. Killin’ ‘em. Bolo Yeung was a beast in the movies. I felt like this album is a beast in the game right now.

TRHH: How did you two hook up and decide to do a project?

Jamil Honesty: I peeped him out on IG. I saw him spitting, hit him up, and we kind of built a relationship from there. I’m always a fan first, so if I see somebody that has talent and I’m a fan of that individual I mostly like will want to work with them. So, we started a working relationship from there. He makes beats as well. We started off with him sending me a beat and I was like, “Yo, let’s work. Let’s maybe do a project together.” I started sending him joints and he was knocking them out quick. Microwave-level fast. It was crackin’, it was hot, and the beats that I was sending him he knew exactly what to do with them. Thus, we have Bolo Yeung.

TRHH: One of the songs that’s a little different on the album is “Queen.” It’s not soft at all, so it fits with the album, but the subject matter is different. How did that song come together?

Sean Links: That song is dedicated to my wife. I usually stick to the script of how back in the day you had a shorty song or something like that. Basically, it’s me throwing in a shorty song. It’s real life shit with my wife. I love her, so that’s where that concept came from. Shouting out the queen.

Jamil Honesty: He actually caught me by surprise with that, the way that he took it. I was sending him so many aggressive beats that I was like, “Yo, you think I should send you something a little mellow?” He was like, “Nah, keep it going with the aggressive stuff.” So, when I sent him that joint he sent it back and it instantly became one of my favorites, if not my favorite track on the album. I’m a Staten Island dude and I’m a big fan of the Purple Tape. I liken it to how “Ice Cream” fit within the songs on that album. It wasn’t too soft, it wasn’t too hard, but it was grimy enough to fit with the other songs. That’s what I liken “Queen” to. It’s a beautiful song but still has that grit to it.

TRHH: What was your wife’s response to the song?

Sean Links: That’s one of her favorite joints. When she first heard it she was like, “Wow!” She know how I get down as far as the music. When I started doing a couple of joints I was like, “This one’s for you.” She loves this one. She was excited about this one. She was like, “This could make the radio. This is different. Nobody is doing different stuff like this.” It’s a good song. Everybody love it. She definitely was excited. So, to have it out and have everybody hearing it, the responses, it’s dope.

TRHH: Jamil, what made you get on the mic for the song Army of Two?

Jamil Honesty: It’s funny because when we first talked about the project he was like, “Nah, I want you to rhyme too.” In the beginning it was going to be me and him rhyming on the whole project, but then I was like, “Nah, I want to sit back on this one and let you do the emceeing and I sit behind the boards.” I also was thinking that I have a little bit of a buzz, so I wanted to make sure I gained as much attention to the project as possible. So, that’s why I put myself on the project. Plus, I was feeling it. I wasn’t going to just jump on it because of that, but I was definitely feeling the whole vibe and everything he was doing. I wanted a piece of that. It was just in support of what he was doing and in support of the project.

TRHH: Jamil, what does your production workstation consist of?

TRHH: On the song “Still Workin’” Sean says, “You kiss the ratchet like Flavor Flav” and I just busted out laughing. It’s my favorite line on the album.

Jamil Honesty: That means you listen. That’s what’s up.

TRHH: It’s so accurate and multi-layered. That was so dope.

Sean Links: I appreciate you, bro.

Jamil Honesty: There are many dope lines on there. Many, many! This dude is a monster, man.

TRHH: Jamil, what’s your favorite rhyme from Sean on the project?

Sean Links: It’s a lot, man. I like that line when he said, “The MAC in your mouth like soul food.” [Laughs] It’s so many, man. To be honest with you, I’m so proud of this project that all of it is my favorite. I go to the gym and just press play. I tell Alexa to pull up the album and I just let it play. No skips at all. I love every line, every beat, snare, kick, all of that. And I told him that.

TRHH: Sean, what’s your favorite beat that Jamil made on the album?

Sean Links: I would say Optimus Prime. I feel like that’s one of the ones I was snapping on. That Optimus Prime beat is crazy. That’s my favorite joint.

TRHH: Who is the Bolo Yeung album made for?

Sean Links: Hip-Hoppers. Real Hip-Hop heads. People who miss that 90s, straight beats and bars, straight to the point, metaphors, wordplay, wittiness. This is made for people who love lyrics. Everybody who love real Hip-Hop and love that 90s flow, this is that. This is for the Hip-Hoppers, man.

Jamil Honesty: The dudes that are a part of that Stretch & Bobbito lineage. I always go back to that documentary when Q-Tip was talking about how they created Illmatic and they created Illmatic specifically for Stretch & Bobbito to play it. That’s what I had in mind. I want all the DJ’s that play this kind of stuff to play it. In all my interviews I always say I have an affinity for the DJ’s because they keep this thing running. If they rock with it, then you’re good money. Like Sean was saying, this is for the people that are a part of that lineage. The Wu-Tang’s, the Nas’, the Boot Camp Clik’s, all of the stuff that we were raised up on.

If you study the project you can hear all the influences in there — Boot Camp, Beatminerz, RZA, Preemo, Pete Rock, all that. I’ve been hearing that from all the feedback that I’ve been getting from the project. I think that played a big part in the chemistry between myself and Sean. We were raised off of the same things. We love the same things. We have the same focal point which is rhymes, beats, and making great music. I do want to shout out that we have vinyl dropping on Copenhagen Crates and also the CD’s and tapes through Bars Over BS. I want to make sure everybody taps in with that. Shout out to Ty Farris, shout out to Martin, shout out to Coach Da God for setting up these deals for us.