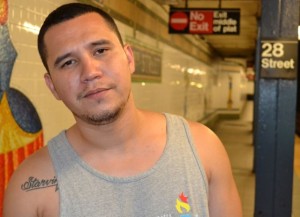 Photo courtesy of Starvin B

Queens emcee Starvin B is a throwback to the golden era of Hip-Hop when flow, lyrical content, and wordplay were more important than swag. The hard rhyming New Yorker has been garnering attention in the states and abroad with a handful of albums that don’t lack in lyrics.

Starvin B recently spoke to the The Real Hip-Hop about the way he formulates his lyrics, the current New York rap scene, and his new album, Be Like Water.

TRHH: For those that don’t know, who is Starvin B?

Starvin B: I’ve been making music pretty seriously for the last 8-9 years. I’m from Queens, New York—Long Island City, Sunnyside area, Woodside area. I pay tribute to the golden era of Hip-Hop music and try to bring that old stuff back to the table and the honesty back to Hip-Hop music.

TRHH: How’d you get the name Starvin B?

Starvin B: It started as a joke. They called me Brando as a nickname. I was a skinny little kid so instead of Marlon Brando they called me Starvin Brando. I stuck with it because I’m a starving artist and all of that.

TRHH: Explain the title of the new album, Be Like Water.

Starvin B: Be Like Water is a tribute to Bruce Lee, of course. Bruce Lee came up with it but it’s also the music that’s featured on the album has no intention of fitting in with the music business. It’s just going with the feeling of music. It’s a tribute to the fluidity of freestyling and putting that on record.

TRHH: How is this album different from your last album, Something in the Water?

Starvin B: Something in the Water was more of a contrived effort that told stories and had a darker feel to it. It was coming from a darker place. It was about things that people go through like battling addiction and alcoholism. This one is pretty much having fun with it. Be Like Water is getting in the studio and coming up with the best rhymes and best beats as opposed to trying to tell a story with a song.

Starvin B: I just go with whatever is in my head. With Be Like Water there was no hesitation on the trigger finger as far as what I was writing. Everything that I wanted to say I didn’t hold back on it. Be Like Water is about constructing the best feeling bar–whatever was hitting right.

TRHH: Do you write to the beat or when something comes to you?

Starvin B: I write when something comes to me. On Be Like Water there’s joints on there that aren’t even written. They’re freestyles that I said to myself over and over again.

TRHH: Who are some of your influences in Hip-Hop?

TRHH: How’d you link up with Sean Price?

Starvin B: He just came to the Goblin Music Studios to record some records and he liked it so much that he hung out there. He caught wind to what I was doing so we did one record and it came out phenomenal. We just did another record that just came out. Hopefully we’ll do some more. I’m pretty sure we will. The chemistry is pretty good.

TRHH: Why do you think so many New York emcees have strayed away from the New York sound?

Starvin B: Because they’re trying to pay their bills. They’re trying to live the glamorous lifestyle–I don’t think they’re able to do that. Sticking to the underground doesn’t really payoff and they see how it goes so they’re stuck catering to that. It’s really a mistake on their part because it takes the fun out of music. It also takes the ability to identify where they’re from. It basically is like being lost. I don’t know what to say to those guys.

TRHH: Is it more beneficial for you to be independent then to try to get a major label record deal?

Starvin B: That’s up in the air. That’s something I haven’t figured out. I don’t have the answer to that. So far it’s working out OK for me but it’s not great. I’m sure that with a big label I would have had a lot more of a look and more of a buzz going on with some more money behind me to push it. Being independent I’m able to do whatever I want as far as the direction of my music—that’s good. If it does take off I’ll be the one that benefits from that more than anyone and that’s good, too. It’s questionable whether it’s beneficial or not.

TRHH: What’s next up for Starvin B?

Starvin B: I got another EP about to drop with One Take. Jonathan “One Take” Erazo has produced a lot of stuff for me. He came by Goblin Music Studios and we worked on a song called ‘Trained Assassins’ with Spit Gemz, Eff Yoo, and Carmen Indhira and that came out nice. That was two years ago and in that two-year span he’s been giving me beats and we’ve got about 12-13 songs that we’re going to put out real soon. That project is called ‘Blood from the Stone’ and you can look for that before the end of the year. I’m excited about that. Things are looking really good. People are starting to catch wind to what I’m doing. I’m just going to keep rocking. It’s part of me so it’s a natural thing. I’m not contrived; I’m not trying to project an image. I just give them the music, I believe in it, I enjoy doing it, and I’m going to continue to come out until I get sick of it—I don’t see that happening any time soon.

Sherron Shabazz is a freelance writer with an intense passion for Hip-Hop culture. Sherron is your quintessential Hip-Hop snob, seeking to advance the future of the culture while fondly remembering its past.
View all posts by Sherron Shabazz →
This entry was posted in interview and tagged Be Like Water, interview, Something in the Water, Starvin B. Bookmark the permalink.