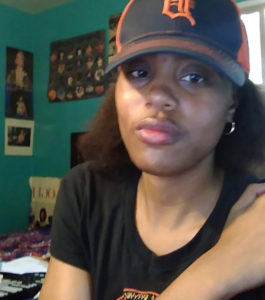 ThatBlessedGirl is a producer from Saginaw, Michigan. Her music is soulful and head nodding. TBG makes boom bap music, but with her own unique flair. After releasing a handful of instrumental EP’s ThatBlessedGirl’s music began to catch the ears of many in the culture of Hip-Hop.

ThatBlessedGirl spoke to The Real Hip-Hop about her project alongside Northeast Beast, the illness that gave birth to her Hip-Hop moniker, and her aspirations in the world of music.

ThatBlessedGirl: I’ve always been into music. I started off singing. I’ve always wanted to get into production but I never had the right people around me to show me what equipment to get. I met this group on YouTube, Scratch Mag TV and they helped me buy my first piece of equipment, which was the MPC Studio. I’ve always been into it since a young age. The producers who inspired me are Q-Tip and I’m a big En Vogue fan so, Foster & McElroy.

TRHH: What is it about Q-Tip and Foster & McElroy that grabbed you?

ThatBlessedGirl: Q-Tip is a great loop picker and meshes great records together as far as drum breaks with the sample on top of it. His drums are always on point. Foster & McElroy had Hip-Hop tracks in the background with chords underneath it, female vocals on top of it, tight harmonies, and great singers. All four lead singers were great.

ThatBlessedGirl: I used to play Xbox and that was my gamer tag. I had an autoimmune disease which led to me needing a gallbladder removal. With that gallbladder removal there was a 50/50 chance that I would live or die. I made it out of that and ended up needing a liver transplant. I got the liver transplant and named myself “ThatBlessedGirl” because I think that I’m blessed [laughs].

TRHH: You are! How did you maintain positivity throughout all of that?

ThatBlessedGirl: It wasn’t easy at first. Going through it when I was going through it, I was just living. I wasn’t thinking about it or anything. Everything came afterwards. Seeing how much I missed out on in life as a youth and how friends had gone on with their lives, in 2015 through the end of 2016 I was in a major depression. I wasn’t myself through that. I started doing therapy and took up this class called Personal Power University ran by Rhonda Bennett. She’s a member of En Vogue and she does Personal Power coaching. I went through her program and it’s been amazing ever since. I try to keep a positive attitude every day now. I have gratitude journals and everything. That’s how I stay positive. I’m still going through it, but I stay positive.

TRHH: How old were you when all of this happened?

ThatBlessedGirl: I found out I had the autoimmune disease at the age of 12. Everything was good with that. I was still playing basketball – basketball was my first love. I couldn’t play in school because of the contact. From 15-through-20 I was waiting on a liver transplant. I got the transplant two days before my 21st birthday.

ThatBlessedGirl: It’s Autoimmune Hepatitis. It basically attacks your body itself for whatever reason. I was on medicine and everything for that and mine attacked my gallbladder and my liver.

TRHH: You really are blessed.

ThatBlessedGirl: Yeah. It’s inflammation, joint pain, fatigue, and it causes jaundice. That’s how I found out I had it because one of my aunts saw that my eyes were yellow. Basically, your body is attacking itself.

TRHH: Wow. To the music, how did you hook up with Northeast Beast to do Ur Welcome?

ThatBlessedGirl: He hit me up actually wanting to do a project. He liked some of the beats that I posted. He’s a friend of the crew that I was talking about, Scratch Mag. He hit me up, liked my beats, wanted to do a project, and we built from there and came up with a concept.

TRHH: What was the recording process like with you and Northeast Beast in different parts of the country?

ThatBlessedGirl: What I like to do if I’m sending beats is stay in contact with people. I like them to send me the beat back so I can critique it so I can quote unquote “produce” still even though we’re not in the same places. We used Facebook, Google Hangouts, and all that type of stuff to have some type of chemistry and get the project right.

TRHH: The song ‘Luv at 1st Sight’ stands out to me because the beat is insane, but also because of the quote from Minister Farrakhan on it. Without snitching, what genre is that vocal sample from and whose idea was it to add the Farrakhan speech?

ThatBlessedGirl: [Laughs] The vocal sample is a soul sample. I don’t think anybody knows what it is. The Farrakhan speech was actually Beast’s idea.

ThatBlessedGirl: I was tagged in an Instagram post. They were looking for female artists and producers. From there I just emailed them and sent them my tracks. They had a certain time that they wanted the track. I thought that track was banging so I sent it to them and it got on the project.

TRHH: You mentioned that MPC Studio was your first piece of equipment; what does your workstation consist of now?

ThatBlessedGirl: I use the MPC Studio and the Maschine MK2. Sometimes I use the Akai MPK Mini II, which is a keyboard.

TRHH: Do you prefer the MPC Studio or Maschine?

ThatBlessedGirl: [Laughs] This is going to cause a lot of trouble. I prefer Maschine. I like both for different reasons, but I prefer Maschine. I like the overlay on Maschine. Everything is right there. You have your arrangement and sequences right there. With the MPC, to view song mode you kind of have to go to another menu. When you use Maschine as you’re making your track you can arrange it also. Maschine has crazy sounds! If you just want to make organic music, or original compositions, you can just use Maschine because it comes with crazy sounds already, unlike the MPC, unfortunately.

TRHH: Isn’t most of your stuff sampled though?

TRHH: So, you know how to play instruments?

TRHH: Are you going to start with the keyboard?

TRHH: If you could produce an entire album for one artist who would it be?

ThatBlessedGirl: My god. This is hard question.

TRHH: Give me a few.

ThatBlessedGirl: Of course, En Vogue. I want to work with this new artist Jamal Gasol and Nas. Nas needs some beats.

TRHH: [LAUGHS] Hold on, hold on, why do you say Nas needs some beats?

ThatBlessedGirl: The last project I didn’t really care for.

ThatBlessedGirl: I’m not a critic like everybody else, but I feel like sometimes Nas can pick better beats. I would like to do something with Nas. I think he’s amazing.

TRHH: Did you catch his verse on that album where he said he doesn’t do this for the beats, it’s about his words?

ThatBlessedGirl: I only listened to the album one time. I’ll listen to it again. The song I didn’t like was “Cops Shot the Kid.” It was getting on my nerves.

TRHH: Everybody hated that, but I loved it. I know it was very simple.

ThatBlessedGirl: Sometimes simple is good, but it was just annoying. It’s so many other artists that I want to work with. Royal Flush, 38 Spesh, I like a lot of older people that people don’t mention no more like they’re disposed.

TRHH: Earlier you mentioned basketball, how did you get into basketball and who was your favorite player growing up?

ThatBlessedGirl: My dad got me into basketball, he’s 6’6”. My favorite player is Kobe. I had a lot of favorite players growing up — Kobe, A.I., Ray Allen, and on defense Gary Payton. I played video games and all that so I’m a full out nerd.

TRHH: I appreciate that because I am too. How old are you?

ThatBlessedGirl: I’m 26. I know, I’m an old soul. I was raised by my grandmother.

TRHH: I was going to say because En Vogue came out in like 1990 and you weren’t born.

ThatBlessedGirl: One day I came home from school and En Vogue was on the TV and I was just captured. I asked my grandma, “Who are those girls?” and she said, “En Vogue.” Since then I’ve been able to meet them. I talked to one of the members and got backstage and it was fun. They’re great. Sometimes they tell you not to meet your idols because they may be assholes, but they were great. Great personalities and very positive.

TRHH: I’m amazed that En Vogue is your inspiration given how your music sounds.

ThatBlessedGirl: It’s not just them. My background is R&B. DJ Premier is probably number 2, then Dilla. I caught on to Dilla late. Also Havoc and Camoflauge Monk. Some people say that my music sounds like Dilla, I don’t know.

TRHH: I think it does.

ThatBlessedGirl: This is going to sound weird but it might have something to do with the autoimmune stuff. He had an autoimmune disease too.

Sherron Shabazz is a freelance writer with an intense passion for Hip-Hop culture. Sherron is your quintessential Hip-Hop snob, seeking to advance the future of the culture while fondly remembering its past.
View all posts by Sherron Shabazz →
This entry was posted in interview and tagged EP, Goddess, interview, Joy, Luv at 1st Sight, Michigan, Northeast Beast, producer, Saginaw, ThatBlessedGirl, Ur Welcome, Women of the World. Bookmark the permalink.