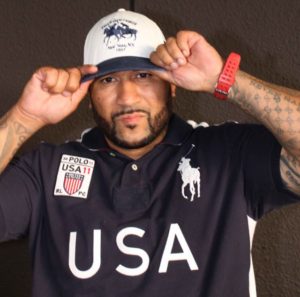 Thirstin Howl the 3rd is an all-around entrepreneur. The Brownsville native is a producer, film maker, fashion designer, and an author. He’s also an emcee and Hip-Hop is his bread and butter. Thirstin recently released the album “Skillmatic” a nod to Nas’ classic debut album, Illmatic.

The Real Hip-Hop spoke to Thirstin Howl the 3rd about the origins of his entrepreneurial path, his Lo-Life clothing line, and his new album, Skillmatic.

TRHH: You’ve taken the word “Skill” farther than EPMD ever took “Business” with their album titles. Why the title “Skillmatic” and how long have you been holding on to that title?

Thirstin Howl the 3rd: I always had that title. It was probably one of the first I ever came up with. It was never the appropriate time to release it. It was too close to when his releases happened. And then he did Stillmatic, so that gave me even more reason to keep pushing it back. I had the idea for a long time. You know the craziest shit too? I had the cover for a long time. I’ve been sitting on the cover for years just waiting for the right time. Last year Illa Ghee put out Illamatic and I was like, “Ah, I can’t do it now.” I gave his time to do what it had to do and respected that he used it as well.

TRHH: On the title track you rhyme with Prodigy and you say, “I’m a poet’s first word, a magician’s last trick.” I thought that line was so ill. What were you thinking when you wrote that rhyme?

Thirstin Howl the 3rd: Just feeling my potential, man. You gotta feel yourself too when you’re working on your music – absorb it. Rap is some egotistical shit too. That’s what I was feeling. “I’m here. I’m doing this. It ain’t gon’ ever be done like this again.” None before me, none after me type shit.

Thirstin Howl the 3rd: It was cool, man. It was a humble situation. Prodigy is a laid back dude. He showed love when he came through and got busy on the spot. We just hung out in the lab, put in some work, and kicked it. It was an honor too and I had the right track. I had that track already recorded but I took one of my verses off so I could put Prodigy on. I felt the song just matched the Mobb Deep vibe all the way.

TRHH: You’re an entrepreneur that works in a lot of different areas. How were you able to come from prison to become a self-sufficient businessman because that’s not really the story for most people who’ve been incarcerated?

Thirstin Howl the 3rd: I was given opportunities through certain people that helped change the direction my life was headed in. It gave me a chance to see other things besides what I was seeing in my own neighborhood and where I come from. Not that I ever abandoned that either, because I remained with both the entire time. As I was being helped other people were showing me other paths in life that really caught my interest. It helped me to stay off the street as far as having a job and shit. For my last bid I had gotten a job with MTV while I was still on the work release program from prison. A lot of things there through the Amer-I-Can Program for Social Change opened my eyes and my mind and showed me so much that I didn’t understand. I always knew I was a smart dude, but that’s when I realized I was dumb the whole time. It showed me other paths. A lot of people came in to help. A lot of the people at MTV have a lot to do with it as well. Even getting a job there I was shown so much love and trust in everything we were dealing with.

I worked for on-air promo so I worked production all the time, every day. Everybody knew I came from prison. Everybody knew I was through a program. But everybody treated me properly and encouraged me in ways in life to understand. It was a good thing. Me remaining there so long I learned everything about how it is to do a production behind the scenes, not just being the dude in front of the camera. Most of the times when you work the lowest part of any team of production you usually learn to work every job because you’re going to be the guy who fills in any time somebody is not filling one spot. You get to learn so much. By being a production assistant I learned a lot of the production management side of things. That’s why when I shoot a video and I don’t shoot a video, I shoot three at a time. I know how to schedule and organize the time to pull off those three with the same budget money that I would use for one –how I’m doing rentals, who I’m hiring, who’s going to work, who’s going to be sufficient, who is going to be able to push for 20 hours. It’s a lot of things to factor in.

TRHH: From day one you’ve been an independent artist releasing music through your Skillionaire Enterprises label, what advice would you give to an up and coming artist who thinks that signing to a major label is their only option?

Thirstin Howl the 3rd: Just believe in yourself, man. If you’re willing to put your money into how much you believe in yourself you’re probably gonna win. You don’t have to wait on anyone. For labels you have to wait for them to tell you you’re good enough for what they’re looking for and what their standards are. I guess I never was that. That didn’t mean I wasn’t gonna fuckin’ put out a record or a nigga ain’t gon’ respect for me rap. I said fuck it, I’ll do it myself. I found ways to let the independent stuff help me. When I released a single with Rawkus, which I’m a nobody and Rawkus is doing tremendous promotion for the Soundbombing album, I’m on the album and my name was on every billboard out there so I released my own album at the same time to ride the wave of the promotions and I probably sold just as much. Just because I rode the wave of those promotions and I know how to make that work for me.

Thirstin Howl the 3rd: Nah, that was the Skillionaire. Skillionaire was actually the first album that I put out through a 4-track and all that. The worst quality of music as far as no mixing. I recorded everything on a 4-track and didn’t even know how to work the 4-track. I put it out and I didn’t even know what a mix was. Skilligan’s Island was like pieces of Skillionaire and Skillosopher together. Skillionaire and Skillosopher were both made in the same way – 4-track stuff. That’s just material I was doing at home. By Skilligan’s Island we was mixing everything down.

TRHH: You’ve been consistent with putting out the grimy New York sound. What’s your opinion on the new wave of East Coast acts that sound more Southern?

Thirstin Howl the 3rd: A lot of them are younger kids that were raised by the radio. According to their age it is what was being played when they were kids. They’re doing the New York sound if you ask me ‘cause they were programmed in New York to do the shit. They don’t know the difference. Especially the influence, they don’t understand. Remember that sound has been consistent with radio for almost twenty years already. It’s probably about almost the same amount of time that New York fuckin’ had Hip-Hop in a grasp. They were raised with that music. I understand the evolution. It’s nothing we can do about some of the evolution and things that are happening. Just know how to make everything work in your favor no matter how things are changing or whatever. And if you wanna make change shut the fuck up and just put in the work and make the change. Stop complaining. Everybody’s complaining but they’re not staying consistent. They’re putting down people that are working. Even though you might think that other music is trash, them motherfuckers are working. If a nigga is dropping 3-4-5 albums of that trash that means he’s putting in some work. You can’t mock a man working.

TRHH: How did the Lo-Life crew evolve into a clothing brand?

Thirstin Howl the 3rd: Consistency of our style and fashion within the individuals. And then from the evolution of our music making it into a culture. It just got a lot of attention. Just because we created a style that’s religious it’s not time sensitive. It’s not a fad like a lot of other things in Hip-Hop. There were many attires in Hip-Hop that were a fad. Not to say that they were fads, they were trends. They went out of style at some point. I remember when everybody was getting Cazal’s and people were getting shot for their Cazal’s in New York. And then everybody just started wearing Cazal’s again like it’s nothing. What? It was dangerous! Even me, I’m thinking twice before I put on Cazal’s because I remember what it was. You can’t mock them dudes. You can’t mock none of that. Sometimes you just gotta respect evolution. The same way they didn’t like our music – our parents and the people before us, the elders. They fully didn’t understand and they couldn’t agree with it.

Thirstin Howl the 3rd: It’s made for me. I make music that I like, that I’d listen to. If I don’t like one of my songs I won’t listen to it until I fix everything and make it to where I like it. That’s the kind of Hip-Hop I love – the kind I’m making. If you notice on all my albums I’m not catering to nobody. I’m coming with something you probably haven’t seen – a style, an aura, an imagination, some sort of versatility. Something to still keep the game fresh. There’s almost nothing out there that you can do brand new. Skillmatic is for people who love Hip-Hop and they’ll see it exactly for what it is. Know what I mean? That’s the truth. Even though there’s a Nas cover and title there’s nothing I did “Nas” on that album. There’s one song that has a sample of his voice on the hook but I didn’t try to recreate none of Nas’ music or anything like that. I came totally Thirstin Howl the 3rd style.

Sherron Shabazz is a freelance writer with an intense passion for Hip-Hop culture. Sherron is your quintessential Hip-Hop snob, seeking to advance the future of the culture while fondly remembering its past.
View all posts by Sherron Shabazz →
This entry was posted in interview and tagged Brooklyn, Brownsville, Bury Me With the Lo On, Lo-Life, Lo-Life Crew, New York, Skillionaire Enterprises, Skillmatic, Thirstin Howl the 3rd. Bookmark the permalink.