Posted on January 3, 2022 by Sherron Shabazz 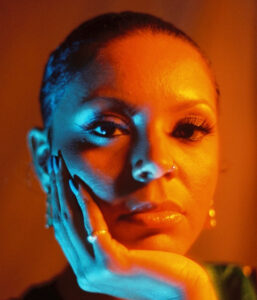 Emcee, engineer, singer, and model, Yah-Ra has consistently released music over the last five years under the name “Maya Huyana.” Now going by “Yah-Ra” the west coast artist has also modified her musical approach with her latest release, “The R.A.W. EP.” Known for her mesmerizing vocalizing, Yah-Ra approached The R.A.W. EP with a harder edge – no singing, just spittin’.

The R.A.W. EP is a 7-track release produced by Python P, Dae One, GiveEmSoul, and Wavy Da Ghawd. The project was written, recorded, mixed, and mastered by Yah-Ra herself, and features a guest verse from fellow Cali emcee, Planet Asia.

Yah-Ra spoke to The Real Hip-Hop about changing her stage name, how she’s being guided by her ancestors, and her new project, The R.A.W. EP.

Yah-Ra: It stands for “The Real Always Wins.” Previously I had an EP called The GOLD EP, which stands for “Give Out Love Daily.” So, I’m always kind of playing with words. In addition, it was almost like motivation to stay on my path rather than be steered in any other direction. A reminder that the real lasts forever when other things do not.

TRHH: Except for the last track, which is very west coast, the project has an east coast, boom bap feel to me. Did you set out to make this a traditional boom bap release?

Yah-Ra: I would say prior to the pandemic most of my music was a mixture of singing and rapping. It has boom bap, but I would say since the turn of the pandemic I’ve more been in that place of rawness, which also gave me the title. However, being an artist from the west coast and having a lot of pride in that, I wanted to throw a wrench in the whole thing like, “Don’t forget where this was made as well.” It just so happens that, that sound of Hip-Hop has stood the test of time.

Sampling was the first Hip-Hop songs ever made. Whether it was Top 40 with the Sugar Hill Gang or if we want to talk about when Hip-Hop really blew up with bars – Rakim, Nas, and all that. I would say it wasn’t necessarily me wanting to sound east coast. It’s just the east coast has a timeless Hip-Hop sound. That has become a universal sound, but I definitely have music that’s not out yet that’s G-Funk or west coast as well. You can really get down lyrically on a sampled or quote unquote “boom bap” beat.

TRHH: So, the beats kind of guided you?

Yah-Ra: Yes, and I selected seven out of all the music I’ve been making. The narrative I’m feeling since the pandemic, that’s a dark thing that has occurred over the planet, so, that gave birth to this project, which sounds more gritty. It has absolutely no singing on it, compared to my past ones. It’s aggressive, very contemplative, and has a lot of biblical references. All the headspace I’ve been in for the past two years since this thing started.

TRHH: At the end of your verse on the song “Think Twice” you say, “Think you’re free, but your mind’s in prison/I’d rather drop jewels than riches.” What did you mean by that line?

Yah-Ra: The first part “You think you’re free, but your mind’s in prison” that’s basically saying in America we have so much freedoms, but our biggest enemy is sometimes ourselves. From the things we consume, physically, mentally, spiritually, to our own insecurities, which our country profits from. “I’d rather drop jewels than riches” that means that I’d rather be a rapper dropping jewels, knowledge, and wisdom than fumbling a bag somewhere signed in a bad contract. Also, that has a dual meaning because “I’d rather drop jewels than riches” means knowledge is infinite and money is temporary. So, that’s kind of like a double thing there [laughs].

TRHH: That’s what I was thinking. That could go a couple of different ways.

Yah-Ra: Yeah, I love writing so much. It’s so cool. I want to start doing lyric breakdowns too, because it’s important for people to interpret, but also know what I’m saying by that. I appreciate that question.

Yah-Ra: I changed my name because I didn’t want to go by my government name anymore, but I still wanted it to be a derivative of my name. My Instagram has always been @yahcreates and people would call me that and I’d just kind of laugh. My nickname has always been Yah or Yah Yah. I wanted to have a new name that was easier to say and not so much of people addressing me like they know me. There is already so much of that with the art, it kind of gave me my superhero name, but it’s still me. And then I chose how to spell it like that because of the meaning of “Yah” and “Ra” which is God and Egyptian God. The last reason was because I liked how it looked visually. It’s nice, short, and sweet, but still a very powerful name. And it looks good on a logo [laughs]. Better than Maya Huyana [laughs]. I had a few good reasons for that one. All of the music, I’m not changing it. It’s still going under Maya Huyana. It’s all me. It’s still going under my catalog.

TRHH: You wear a lot of hats, from being an engineer, singer, and emcee, but how did you start making grillz?

Yah-Ra: I’ve always had this obsession with gold. I met a friend and his company is called Zero Below Grillz based in San Bernardino. Basically, I worked for them at first. Once I relocated to L.A. it became difficult, so I started my own business. About three years ago I created Grillz By Yah, and that was before the name change too, oddly enough. I have just been doing it ever since. It’s pretty much my main merch product. Also, being indie and not having a support system I found it really hard to always have merch. As far as lugging around t-shirts and boxes of items. I didn’t even have a car when I first started music. So, I really liked the grillz because I can pack all of that in a good-sized backpack and keep it going. It was almost like the perfect merch item for me, given where I was at that time. And it’s also not as prevalent on the west coast as it is in the south. So, there is definitely a space for me in that market to have the grillz.

TRHH: On the song “iSiS” you say, “Ancestors always guiding me/So, God had to reside in me.” Have you always believed that you were being driven by the ancestors, if not, how did you discover it?

Yah-Ra: Well, everybody is protected by their ancestors, I believe anyway. I feel like the more you tap into your knowledge of self that becomes a stronger force. As African-Americans, well, black people, period, our language and things we believed was stripped from us. So, it’s almost like you have to re-learn how to pray. You have to look up your family history. You have to go down the rabbit hole of that last name if you’re African-American because your receiver line has been taken from you. So, I do feel like everybody has ancestors and everybody has angels, however, the more you care about them, the more they care about you. Same with wanting to know them.

It’s funny, because some people say God doesn’t like when you pray and only ask for stuff, or if you only pray when times are hard. So, I feel like that’s kind of like your ancestors. You can’t be like, “Hey, can you guys protect me before this big gig?” when you don’t even know what part of the world your family came from. You haven’t researched and you don’t know your great grannies name. Obviously, we all don’t have our great grandparents alive, but that’s why it’s up to you. We all have the power of the world of research in this phone. I’ve looked up my last name before. My dad was not really around in my life, so I went down the Jamaican rabbit hole because I wanted to know where this came from. I think that the more that black and brown people conform to Eurocentricity we kind of go farther away from our ancestors. But the more you tap into knowledge of self and wanting to know who you are, that becomes a stronger protection and a stronger relationship. Speaking ethereally, I guess [laughs]. Some people don’t believe in that, but I believe in it, for sure.

My great-grandparents are alive. They’ve been married on my mom’s side for almost sixty years. They aren’t perfect, but one thing I see them do every day is pray over us. I believe I have a lot of favor because of them. Man, I’ve been saved from so much shit that I’ve done to myself [laughs]. Or like accidents and all types of stuff. I do believe that the sins of the father aren’t on the child. Maybe that’s true, but in the other way, the more that your family has that relationship it protects the seeds as well. Even though I didn’t have my father, I was able to gain a lot of things in the world from my grandparents. Not to replace him, but the information that I needed and the protection was there. Not to go off on a tangent, but that’s kind of like a deep question. It’s all related. Your relatives, your ancestors, and your elders, those are the same thing or they will be the same thing one day. So, the way that your ancestors or your elders protect you definitely helps you along your journey. Then when we become elders we should do the same thing.

Yah-Ra: The R.A.W. EP is made for the unapologetic, grimy, anti-fucking-industrial, pro-black, pro-brown, black economic warring, attitude having, headphone wearing, cracked music having, illegal downloading ass niggas [laughs], from age 3 to age 99, female, male, and for anyone who likes bars that they believe have not been ghostwritten [laughs]. Anyone who likes raw art, really. Anyone who calls himself a Hip-Hop head, east to west. Anybody who appreciates raw expression. The Avant Garde fans. The fans who like that raw, untampered with art. Most of that was made in my home and was mixed and mastered there. It all came though me, except for Planet Asia’s verse [laughs]. Of course, I didn’t write his verse! Definitely the Avant Garde, the Hip-Hop nation, that’s who that was made for. That wasn’t made for nobody’s Billboard. Definitely. And it wasn’t made for nobody looking for a bunch of fucking dance songs and choruses [laughs].

Sherron Shabazz is a freelance writer with an intense passion for Hip-Hop culture. Sherron is your quintessential Hip-Hop snob, seeking to advance the future of the culture while fondly remembering its past.
View all posts by Sherron Shabazz →
This entry was posted in interview and tagged Aurora Music Group, California, Grillz By Yah, Inland Empire, interview, iSiS, Maya Huyana, R.A.W., The R.A.W. EP, Think Twice, Yah-Ra. Bookmark the permalink.