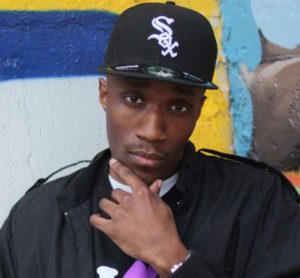 Yinka Diz is an emcee born in Chicago, raised in the Los Angeles area, and currently residing in our Nation’s Capitol. His music is traditional Hip-Hop that contains sprinklings of influences from each of the places he’s visited and lived. Being well traveled is important to Diz, which is why he named his debut album, “The Departure.”

Yinka Diz spoke to The Real Hip-Hop about the importance of travel, how residing in different cities has shaped his sound, and about his new album, The Departure.

TRHH: Why’d you call the new album ‘The Departure’?

Yinka Diz: I wanted the obvious travel theme to it because I travel a lot. I do consulting by day so I’m always on the road. Additionally, it’s like a metaphor for evolution, growing up, parting, and leaving things behind.

TRHH: Was that something that was difficult for you at any point?

Yinka Diz: I’d say it’s always difficult for people because if you think about things from a Freudian perspective you have who you are as a person and who you’re socialized and conditioned to be. When you are in fight or flight type situations you’re always going to revert back to who you were, especially being a black man in corporate America, it’s very easy to go back to who you really are as a person. There’s definitely an element of that and I try to reflect that in my music.

TRHH: The consulting thing threw me off, man [laughs]. Why Hip-Hop if you have a career in consulting?

Yinka Diz: I’ve always done Hip-Hop. Hip-Hop was me before consulting. I got into consulting as a result of going to college, coming out and going, “What can I do to make money?” But that’s not who I am. I feel like when I wanted to know who I was as a man that was Hip-Hop. I’ve always rhymed, produced, and deejayed for as long as I could remember. I will continue to do those things forever; it’s just a matter of whether or not I’m going to release that to the public. This is me actually going out of my way to put that out there so other people can interact with it as well.

TRHH: What inspired the song ‘Hear Me, Tho’?

Yinka Diz: “Hear Me, Tho” a little bit was kind of like a “fuck you” to everybody [laughs]. A lot of my friends know I can rhyme and they hear people and go, “How come this person is getting this look and you’re not getting this look?” or “I watched the award show and I feel like you’re better than all these people,” or “I looked at the XXL cover and how come you’re not on the cover?” It was really like a response to people asking why I’m not getting these looks. I’m doing me and if they don’t hear me or whatever the situation is in terms of where the looks are don’t come for me, I’m still going to be me and I’m still going to keep doing what I’m doing.

TRHH: You were born in Chicago, were raised in Los Angeles, and currently live in D.C. What prompted you to move all over the country?

Yinka Diz: Initially my pops. As he moved in his career he took a lot of different positions so I ended up moving a lot due to that. My father likes to travel a lot, too. Kind of being raised that way I almost inherited it. I travel a lot for my career and I travel recreationally. It’s just something that’s been a part of my life as long as I can remember.

Yinka Diz: Yeah. Most of my formative years. Now being in my early 30s I spent a lot of time outside of L.A. I grew up there as well as other places. I moved back there after college and I’ve been on the east coast since 2009, so it’s been a while.

TRHH: The music on The Departure is really diverse. Would you say that’s due to your influences from the different cities you’ve lived in?

Yinka Diz: Definitely, as well as the places that I’ve traveled to.

TRHH: How would you define the sound on The Departure?

TRHH: Some of the things that stood out to me about The Departure were the references to classic Hip-Hop songs and old school wrestlers. What made you record the song ‘Mr. Perfect’?

Yinka Diz: That’s a good question. I heard the beat and it made me feel invincible. When I was a kid I watched wrestling and there was something about the persona of Mr. Perfect. I just thought it was dope that he was an asshole. Before Razor Ramon who is one of my favorite wrestlers and was also mentioned on The Departure, there was Mr. Perfect. He was like, “Yeah, I’m the shit, what?” I feel like that kind of personality always resonated with young black people. You look at Ric Flair and how much Ric Flair influences Hip-Hop. For me it was Mr. Perfect. I heard that beat and that was Mr. Perfect.

TRHH: Do you have a favorite song on The Departure?

Yinka Diz: It changes. I think that’s kind of indicative of when I really feel like I have a project it has to change. I would say initially it was “Hear Me, Tho” because I’m a Hip-Hop head and that’s a Hip-Hop head record. I think where I am right now with the things I’m experiencing I would say “Breathe” is my favorite record. At least half of the album has been my favorite record at one point in time or another.

TRHH: Who is The Departure made for?

Yinka Diz: Because of the fact that I feel like as black people to some degree we’ve been deprived from some of the cultural enrichment that you can gain from traveling. Because of that we look at the world in a very myopic kind of a way. I feel like when I travel at least I learn something new. I learn something new about myself as well as the rest of the world. That’s why it’s a movement because when people get outside of their personal worldview that they’ve seen and they go out there and see other cultures and other diverse perspectives and ways of looking at things, then it touches them in the same way. That’s why it’s like, “Oh snap, we need to get out here and travel. I saw this and I learned that.” It’s almost become like a club. As people get those experiences it endears them culturally to each other.

Sherron Shabazz is a freelance writer with an intense passion for Hip-Hop culture. Sherron is your quintessential Hip-Hop snob, seeking to advance the future of the culture while fondly remembering its past.
View all posts by Sherron Shabazz →
This entry was posted in interview and tagged California, Chicago, Hear Me Tho, Illinois, Inland Empire, interview, Los Angeles, The Departure, The Departure LP, Washington D.C., Yinka Diz. Bookmark the permalink.