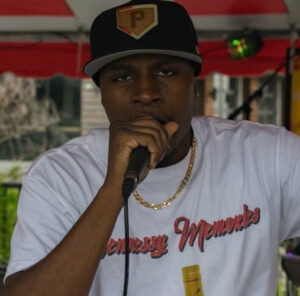 YNX716 spoke to The Real Hip-Hop about why he loves music from the 90s, what it was like working with DBTZ, and their new EP, Golden Bars.

TRHH: How did you end up hooking up with ManZu Beatz to do Golden Bars?

YNX716: We made contact via Instagram. When he hit me up I was in the middle of doing a few projects at the time. He was sending me records every other day. I was writing in between and out of nowhere we were able to come up with a good six tracks and were able to get it done. I was in the middle of other projects at the same time and the COVID situation happened and it ended up getting delayed. He had to get everything mixed and things of that nature, so it ended up pushing everything back. A little after March he was able to get in the studio and mix everything down. We were finally able to drop it in September. It’s definitely a dope project and we met via Instagram to make it happen.

TRHH: Were there any songs that didn’t make the album?

YNX716: Actually, they all made it. I was trying to really keep to the theme of the Golden Bars equating to knowledge in rap. We were able to use all the ones we ended up recording. The “Clarity” joint was like a last-minute track. He initially asked me to throw a second verse on one of the tracks and I was kind of to the point where I already had another project finished, so I didn’t want to put a new verse on an old track. So, he sent me the Clarity beat and it ended up making the intro. That was in addition to the other ones and one of the most recent joints we did.

TRHH: On the song “Clarity” you said, “Although you’ve got a voice, you’ve really got no voice/So, make a choice.” Explain that line.

YNX716: So, pretty much coming from a perspective of an unsigned individual, you’ve got a voice to a certain extent to a certain crowd. It means you don’t have as big of a voice as someone on a higher plateau. I said, “make a choice” which means you have to make the choice to work hard enough to get to that point to be able to reach a broader audience.

TRHH: You have a song that’s not on Golden Bars called “97 Nas.” What inspired you to pay homage to Nas?

YNX716: Coming up Nas was definitely one of my go-to emcees. I appreciate the angles he took as far as kicking knowledge and making you understand from a different perspective. Even if you didn’t live that lifestyle he had a way of making you understand. It was pretty much something I did for shock value. I knew it was going to get people talking. I actually did a flip to a Benny joint. He’s got a joint called “97 Hov” and we’re both from Buffalo, so I figured I’d throw that joint together to really display the skill level that I’ve got. That’s what really inspired me and I still listen to Nas to this day. He definitely is in my top 3 emcees for sure.

YNX716: I gotta go Big L, Kool G Rap, Nas of course, Black Thought, and it would have to be another nineties artist. I would say Outkast, but that makes it 6. I like all 90s Hip-Hop shit.

TRHH: How old are you, bro?

TRHH: [Laughs] Okay, I was wondering. You weren’t going too far back. G Rap is the oldest guy on your list.

YNX716: Yeah, when I was growing up that’s who I was listening to.

YNX716: Just life in general. Growing up I was going through a lot of stuff and I didn’t know how to channel my energy. I’ve always been into music, whether it was recording or writing music in general. Life experiences got me into it and is keeping me going with it, as far as using it as a way to vent and using it as an outlet.

TRHH: You mentioned that G Rap is in your top 5 and you have a new song with him called “Fake Love.” How did you end up working with G Rap?

YNX716: I’m working on an album called “Live from the 90’s” and I was trying to figure out who I could get on this record that’s a 90s Hip-Hop artist. I hit my man Inf up because he’s tight with a lot of the 90s artists. I sent him a record and he was like, “Yo, it’s dope.” I told him I wanted to get G Rap on it and he was able to connect us together. He sent him the joint and sent it back to me. He did his thing on that joint. He’s definitely one of the greatest.

TRHH: What can fans expect to hear on your next album, “Live from the 90’s?”

YNX716: It’s going to give you that feeling. We can’t go back to the 90s, but I’m going to do my best to show my influence. At the end of the day, I’m student of the game, so, I want to be able to reciprocate that energy back in to the universe. I already give off a 90s feel in my opinion, so, expect to hear lyricism, different styles – I’m pretty much going to sound different on every track, and expect to hear Hip-Hop and somebody rapping again.

Sherron Shabazz is a freelance writer with an intense passion for Hip-Hop culture. Sherron is your quintessential Hip-Hop snob, seeking to advance the future of the culture while fondly remembering its past.
View all posts by Sherron Shabazz →
This entry was posted in interview and tagged 97 Nas, Buffalo, Clarity, Daimajin, DBTZ, Fake Love, Golden Bars, Live from the 90’s, ManZu Beatz, New York, YNX716, YNX716 & ManZu Beatz. Bookmark the permalink.