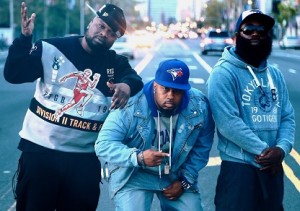 Straight out of Jersey comes something you rarely see today in rap music – a rap group.  What’s even more rare about this group is they’re original, they refuse to follow trends, and they are blessing fans with that classic Hip-Hop sound.

Riq da Kid, Tru Trilla, and Prince AK are the 050 Boyz. Groomed by DoItAll from Lords of the Underground, Fam of Rottin Razkals, and Treach of Naughty by Nature, the 050 Boyz are entrenched in Jersey rap royalty.

The Real Hip-Hop spoke to the 050 Boyz about the origins of their group name, coming up under New Jersey Hip-Hop pioneers, and their new album, Everything 050.

TRHH: What’s the meaning behind the name of the group, 050 Boyz?

Riq da Kid: Every state has a numerical code. You can find this number used on certificates and even used by the federal government to identify the state, so basically in this case 050 stands for New Jersey, or “Jersey Boyz”.

TRHH: The first single from the album ‘Get Back’ is real grimy. How’d that song come together?

Riq da Kid: Well the producer Clinton Place set the platform with the beat, and Tru Trilla came up with the hook and then we built the track up from there.

Tru Trilla: Get Back came from a concept I put together to combat and bring back the hard Hip-Hop, plus everything now is too jolly and clubby.

TRHH: What impact has Treach, DoItAll, and Fam had on your career?

Riq da Kid: Just from their guidance and being inspirational. To watch these guys come from where I’m from and be successful was motivational! But to have them personally as big brothers is a blessing. And shout out to the whole of Lords of the Underground, Rottin Razkals, Naughty by Nature and super producer Kay Gee for helping me with the second mixtape I ever made. I will never forget that!

Tru Trilla: You know the brothers are always bring their A-game, but when they let you know that your energy increases theirs, it’s a true blessing.

Prince AK: The impact is that they all done this before, so being around those guys we get all the guidance we need on making the right decisions.

TRHH: What’s the best advice you’ve received from those guys?

Prince AK: [Laughs] Treach told me to beat the internet up and I did in 2012. I got placed into the Top 50 Indies in the country by allhiphop.com.

Riq da Kid: In today’s music industry you have to beat the streets up and internet both at 100%! But also in terms of having a focus on quality of performance, I learned a lot, especially from watching Treach and Fam. There was also a lot learned in terms of how to construct and make a song.

TRHH: How do you approach recording? Are you competitive with each other when writing verses?

Tru Trilla: No, we look at it as one big rhyme, although we write different hooks to compare and see what’s better to go with.

Riq da Kid: I love to get in a zone where I feel no one can touch me and it’s just me and the beat. I’m an emcee inspired to one day be mentioned in that list of greats, so my mindset is that the artists I’m competing with are the artists who have a spot on that list already, because I want mine!

Prince AK: Well I hear the track and the hook then I go for mine. These are my brothers so being competitive with them is useless.

TRHH: Who came up with the concept for the ‘Hot Damn’ video?

Riq da Kid: I came up with the concept and story and then DuB M brought it to life.

TRHH: What’s the overall goal for the group?

Prince AK: The overall goal is to open the doors for our town, Brick City and put us back on the Hip-Hop scene.

Tru Trilla: To build our company and brand, to keep growing, and open doors for Jersey.

Riq da Kid: To put ourselves in a position where we can help upcoming artists from Jersey, and to be mentioned as one of the biggest music groups in Hip-Hop.

Prince AK: Everything 050 is for the world to hear, not just Jersey. So don’t get it twisted, we want our music out there worldwide.

Tru Trilla: It’s for everybody who triumphed through struggle, to win, understand why, then do it again. 050 dat!

Riq da Kid: It’s for the world, for the streets, for the struggle, for anyone with dreams and goals, and for Hip-Hop!

Sherron Shabazz is a freelance writer with an intense passion for Hip-Hop culture. Sherron is your quintessential Hip-Hop snob, seeking to advance the future of the culture while fondly remembering its past.
View all posts by Sherron Shabazz →
This entry was posted in interview and tagged 050 Boyz, Everything 050, Get Back, Hot Damn, interview, New Jersey, Prince AK, Riq da Kid, Tru Trilla. Bookmark the permalink.