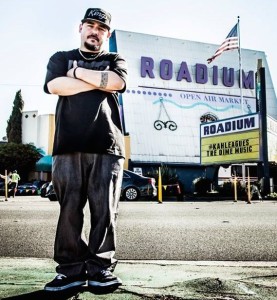 A year ago San Diego based rapper Kahlee released his introspective album, “Blessed”. The album is a glimpse into the life of Kahlee, a family man who is grateful for his position in life. Throughout the 13-track release you hear a man lamenting the loss of a loved one, catechizing religion while celebrating the creator, and reveling in his role as new a father.

Fast-forward to 2015 and the Blessed album will be remixed and re-released in late July for free for Kahlee fans. Bay area production team Digital Martyrs handle the music on the project titled, “Blessed: Remixed by Digital Martyrs”.

Kahlee spoke to The Real Hip-Hop about “baring his soul” in his music, his foray into podcasting, and his new project, Blessed: Remixed by Digital Martyrs.

TRHH: Why’d you decide to remix the Blessed album?

Kahlee: From the beginning I knew I wanted to remix it. The reggae group Rebelution had two remixes on their Peace of Mind album. It was like three different versions of the same album. I wanted to do something like that from the beginning. I had different ideas as far as how to have them remixed. I started doing more work with different artists and we decided, “Yo, let’s do this.” Off-Balance was in a position where he was really knockin’ beats out. He had a lot of different styles so he ended up being somebody I thought I could rely on to do the whole album. Originally I thought of getting multiple producers.

TRHH: “Baring My Soul” deals with some real heavy personal issues. Talk about the inspiration behind that song.

Kahlee: A lot of times people think that song might be about my terrible childhood – it’s about some terrible parts of my childhood. My upbringing was great. I was very blessed – I still am. The album ‘Blessed’ is very personal and 90% off it is probably about me. At the same time it’s a conceptual album because I felt like it’s a lot of people out there that’s living the same life as me. I think a lot of younger cats are making music that kid’s right out of high school can relate to. I’m not trying to cut them out but it’s not me. I was more focused on people like myself that are young with families. It’s a concept album about a middle-aged dude with a family, kid, and work. The idea is that I’m blessed even though I don’t have that million-dollar lifestyle that some people think they have to have in order to be blessed.

TRHH: Your music has a message more often than not. Why is it important to you to say something of substance when you rhyme?

Kahlee: It’s not always. Sometimes I just wanna get out there and bar out. This isn’t my first album but I feel like this is what I should have did on my first album, if that makes any sense. I wanted to get real personal. This is not the best example but I’ve seen a movie or heard a podcast with an artist or whoever and I got to know them a lot better and it helped me to appreciate their music more, even if it’s not the style that I would normally be into. I guess you can say it was kind of like that where I wanted people to really know me. I wanted people to associate with me, especially the ones who have similar lives. I always compare things to comedy. I feel like the best comedians are the ones that you can relate to. They talk about things that you know firsthand about. I guess this was my way of doing that. I plan on doing a bunch of different styles of music, a bunch of different concept albums, working with different producers, and artists in a group thing. I wanted people to understand me and know me a lot better so when I do something different they’re more likely to feel it.

Kahlee: I don’t know if it was any one person, but I would say it was more wack emcees than dope ones [laughs]. First of all I don’t think you have to be an emcee or any kind of rapper to tell somebody else that they suck. Me being able to tell you in your own way is a lot better. It’s one thing to say, “Troy Polamalu doesn’t hit that hard,” but if I throw the ball at him and run his ass over it’s a lot better. That’s kind of one of the things that got me to want to emcee and just freestyling at parties and things like that. There’s a lot of people that influenced my style at the beginning because I was listening to them. I can’t think of any one or two people that made me wanna start rhyming. It was just going to parties and seeing freestyle cyphers poppin’ off and things like that.

Kahlee: Platform Collection is a web network. Right now we have four podcasts. We have Culture Sessions with Chamber Records, it’s a label out of the 626 area. We’ve got 2Mex Hologram Podcast, and I have a show on there with my man from my crew The Fresh State, [Kill] cRey, called Proof of Life. It’s like half mix show, half podcast. With our show every episode has a topic and we play music that fits the topic. A lot of times a song may not literally fit the topic, but maybe it’s a song I used to play the first time I was shrooming and that’s why it would fit the topic “Under the Influence” or whatever. The main podcast is Crappy Awesome. They were the first podcast that started the network with KillcRey and (mr) Arash. Then we have the blog side of things where we post videos, music, and we have a few web shows. We have a few new web shows that will be coming as well as some podcasts from artists who have been really doing their thing on the west coast and beyond. We’re only about a year and a half in, but in that year and a half we’ve made some headway. I think the next year and a half will be really big. It’s going to be nice. I have my hands more into it now so I have a little more control of what’s going on and I can help out the guys that are involved. It’s dope. It’s another angle to attack the game from.

TRHH: When can we expect your next album?

Kahlee: I don’t have a definite answer for that. As far as the Blessed remix album that was definitely something that kind of helped me shine some light on the past album as well. Because unfortunately I didn’t get to promote it the way I would have preferred to, even then. I don’t have the budget or the time to push it having my current situation with family and work. I’m working on something with two of my teammates. My dude Uptown Swuite and I have a group called “The Seed”. Another homie from the Fresh State crew named Creed Chameleon, we have a few songs we’re working on and possibly dropping an EP at the end of the year. Uptown has like 100 records that are ready to be released and Creed has a record called “Christopher Clark” so I’m trying to work it out to where it’s kind of like pushing that nitro button in a race and helping the three of us go.

We don’t even have a name for the album or a name for the group for that matter. We’ll be dropping a couple of the songs on a compilation type thumb drive from a clothing company Farmer’s Market Hawaii. We all have some solo tracks on there as well as some tracks with the three of us. We’ll probably have a 6-7 song EP dropping at the end of the year if everything works out. I have a couple of concept albums I’m working on. Some things I’m keeping close to my hip, but hopefully by next year I’ll be able to drop two EP’s aside from what me, Uptown Swuite, and Creed will be dropping this year. I’ve been focusing on collaborations and jumping on other people’s records. We have a few posse cuts that we’ll be dropping throughout the summer to help push the album. Hopefully the Blessed remix album will drop at the end of July.

Sherron Shabazz is a freelance writer with an intense passion for Hip-Hop culture. Sherron is your quintessential Hip-Hop snob, seeking to advance the future of the culture while fondly remembering its past.
View all posts by Sherron Shabazz →
This entry was posted in interview and tagged Baring My Soul, Blessed, Blessed: Remixed by Digital Martyrs, Digital Martyrs, interview, Kahlee, PlatformCollection.com, San Diego. Bookmark the permalink.