A Conversation with Adrian Younge 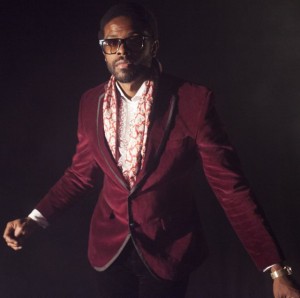 Photo courtesy of The Artform Studio

Adrian Younge is a conventional musician in an unconventional time, which makes him, well, unconventional. Eschewing digital recording in favor of a warmer analog sound has made Younge a beloved figure in modern Hip-Hop. His music has been sampled by the likes of Jay-Z, Common, Ab-Soul, and Royce da 5’9” & DJ Premier, also known as, PRhyme.

The Real Hip-Hop spoke to Adrian Younge about the future of the Linear Labs record label, the impact of PRhyme, and the Linear Labs: Los Angeles compilation.

TRHH: What’s the motivation behind releasing a compilation album now?

Adrian Younge: The motivation being releasing a compilation album now is I get to showcase some new songs from 4 albums I have releasing this year. Also, I get to introduce people to forgotten tracks within my catalog. For me I thought that was important because as an artist I like to keep my music together. I like people to hear my music together because I feel like my music is a story. I like to tag team my music and have it all be taken as homogenized experience – something that’s not made up of a bunch of different things. I like people to listen to it as if it’s one continuous track. Those are the reasons why the compilation is important to me.

TRHH: I don’t know if you’ve ever produced a single for anybody but it seems like it wouldn’t be your thing to produce one track on somebody’s album. Is that correct?

Adrian Younge: Yes, that is correct. I do some production here and there but generally speaking I like to do albums because if you make a song with somebody that’s just where you start. Your best songs are while you’re working with people so I like people to hear my music as if it’s a collective of work, especially when it’s dealing with an artist that I’d really like to work with. I want them to listen to a bunch of music that I have with that artist opposed to just one song.

TRHH: What does an artist need to possess to be on the Linear Labs label?

Adrian Younge: I mean, a lot. Basically the Linear Labs label is based on the notion that we are backing handcrafted music. It’s an artisan approach to the making of music. It’s something that I feel has been lost in the art. People that would be chosen to be on the label has to be someone that I feel has that approach — that refined approach to the manufacturing of music. It takes a lot, for example everything I do does not require computers to produce. I would like stuff to be recorded on tape, I’d like people to use hardware to record with, not just plug-ins. It’s a lot to it. It’s a lifestyle behind the artists that are on the brand.

TRHH: One of the songs on the album is ‘Return of the Savage’ with Ghostface, RZA, and Rae. Give me some background on how that song came together.

Adrian Younge: Basically that song is the first single off the 12 Reasons to Die part II album. That song encapsulates the theme of the second album, which is just a continuation of 12 Reasons to Die part I with Raekwon being a new lead character. That song helps to tell the story of this new transition. I know Raekwon, RZA is one of my really good friends, and obviously Ghost, so it was something that I said I wanted these people on it and when I spoke to them they were all down — so it was that easy.

TRHH: What’s your creative process like? What do you begin with when creating a song?

Adrian Younge: It all depends on what kind of song I’m making. It all depends on what’s inspiring. Because I play many instruments sometimes I’ll start out a song on a flute. Sometimes I’ll start out on drums, or bass, or keys, it all depends on what my mood is. What I intentionally do is create the foundation for a song and when that foundation is created, whether its drums and keys and/or bass and drums, thereafter I bring in the vocalist to help to paint the picture by placing a lead on top of the song and then what I do is come in and paint the background. Meaning tie the track together to make a complete song. That’s essentially how it works.

TRHH: Royce & Premier did a stellar job with your work as PRhyme. Did that project bring more ears to the music of Adrian Younge?

Adrian Younge: Yes. Absolutely, because Primo is a living legend – he has heritage in the game. Royce is one of the best emcees in the world. Whenever they’re doing anything if you’re connected to that you’re obviously gonna get peripheral looks. Because I’m connected to this it definitely put new eyes on my catalog, especially since my catalog is based upon the compositional perspective of people like Primo. People got it, they understood what we’re trying to do.

TRHH: You’ve worked with Souls of Mischief, Ghostface, and others. Is there another artist you’d like to do a complete album with?

Adrian Younge: I was actually just thinking about that the other day. If Aretha Franklin still has chops I’d probably like to do something with Aretha Franklin.

TRHH: What’s next up for Linear Labs?

Adrian Younge: We have 12 Reasons to Die part II, we have Something About April part II, and we have an album called “The Midnight Hour” with Ali Shaheed Muhammad. It’s our production with different featured guests. All of that stuff is coming out by fall of this year.

Sherron Shabazz is a freelance writer with an intense passion for Hip-Hop culture. Sherron is your quintessential Hip-Hop snob, seeking to advance the future of the culture while fondly remembering its past.
View all posts by Sherron Shabazz →
This entry was posted in interview and tagged 12 Reasons to Die part 2, Adrian Younge, interview, Linear Labs, Los Angeles, PRhyme, producer, Return of the Savage. Bookmark the permalink.