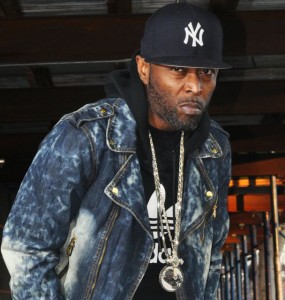 Photo courtesy of Off The Block Entertainment

After the passing of The Notorious B.I.G., the defection of The Lox, and the retirement of Ma$e, Bad Boy Records was left without any true rap stars. Seemingly out of nowhere Harlem emcee Black Rob emerged as the chosen one to carry the Bad Boy baton with his debut album Life Story, and its hit single, “Whoa!”.

What followed was a sophomore album (The Black Rob Report) that didn’t match the sales of his debut, the subsequent separation from Bad Boy Records, and a 4-year prison stint. In 2010 Rob returned home to begin work on his third release (Game Tested, Streets Approved) on Duck Down Records, only to be plagued by health issues after its release.

Black Rob spoke to The Real Hip-Hop about his recent health issues, his upcoming reality show, and his new album, Genuine Article.

Black Rob: It is me, I’m Genuine. I’m the Genuine Article. The real thing! You can’t get no realer than myself.

TRHH: Tell me about the single ‘Wave of New York’.

Black Rob: I wanted to give the people what they have been asking for so Wave of New York is one of those joints. That raw New York flow!

TRHH: Do you feel like lyrics are coming back to New York?

Black Rob: I wouldn’t just say New York, but it’s definitely coming back to being more about lyrics.

TRHH: Talk a little about the reality show you’re involved with, Comeback Kings.

Black Rob: Hilarious and real at the same time! It’s not other reality shows that people may be used to. It’s about cats that have been on top of the game at some point in our career and still doing it. Showing some of the things we have to go through as an artist.

TRHH: On the song ‘Welcome to My Life’ it seemed like you were sending a message. What were you feeling when you wrote that song?

Black Rob: I was just allowing my fans to know more about me that they didn’t already know. I’m already known for telling stories, so that is just another story of my life.

TRHH: Recently you disclosed that you have high blood pressure that led to a stroke. How has your life changed since your health issues came to the surface?

Black Rob: Wow, man my life has changed drastically. I can’t do things that I used to do, I don’t eat things that I may have liked to eat before. I had to stop all the salty foods, because that sodium is dangerous. I take it very serious, because I still have so much more to do in life and I have to be here for my kids.

TRHH: What do you hope to achieve with Genuine Article?

Black Rob: Satisfied fans. I’ve been hearing so much that people want real music again — Hip-Hop/boom bap sound. Well this is what I’m giving them and I feel good about this project, too.

Sherron Shabazz is a freelance writer with an intense passion for Hip-Hop culture. Sherron is your quintessential Hip-Hop snob, seeking to advance the future of the culture while fondly remembering its past.
View all posts by Sherron Shabazz →
This entry was posted in interview and tagged Black Rob, Comeback Kings, Genuine Article, Harlem, interview, SlimStyle Records, Wave of New York, Welcome to My Life, Whoa. Bookmark the permalink.