A Conversation with Audible Doctor

Posted on February 7, 2014 by Sherron Shabazz 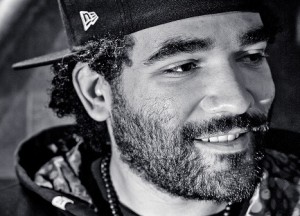 Originally from Wisconsin, but now residing in New York, Audible Doctor is swiftly making a name for himself as one of the most diverse producers in Hip-Hop. The Doctor (who also raps) has produced tracks for artists like Joell Ortiz, Tragedy Khadafi, his Brown Bag All Stars crew, and most recently, 50 Cent.

The Doctor also collaborated with Onyx’ Fredro Starr on his latest album, Made in the Streets. Made in the Streets is a gritty throwback album reminiscent of the 90s boom bap era. Audible Doctor crafted tracks that lived up to the album’s title and is sure to please fans of backpack and hardcore rap.

The Real Hip-Hop caught up with Audible Doctor and discussed producing Fredro Starr’s new album, Made in the Streets, crafting beats for 50 Cent, and new music he’s releasing in the very near future.

TRHH: How’d you hook up with Fredro Starr to create Made in the Streets?

Audible Doctor: People keep asking me that and I can’t remember. I honestly think I hit him on Twitter or something, got his e-mail, and sent him some beats. He wrote a couple of joints and originally it was supposed to be a couple of tracks on this project he was working on. He ended up leaking one of the joints and he got so much traction that he was like, “Yo, let’s do a full project.”

TRHH: Talk a little about the song ‘Everyday Hell’.

Audible Doctor: That was just one of the first I sent him. As far as lyrically where the song went, that was all him. That’s one of my favorites off the album. To me it’s exactly what I loved about 90s Hip-Hop and what some would consider, real Hip-Hop but with an updated sound that stands the test of time. It shows you can still do golden era Hip-Hop with updated sounds today.

Audible Doctor: I don’t think it really has to do with the tools that you use. It has to do with what you do with them. I use pretty much all software. Most people think that I use an MP[C] or some kind of hardware to get that sound. It’s really just about my ear, the samples, and how I chop ‘em. I love the sound of an MP but when I started producing I never had the money to buy one so software was like the easiest and cheapest option for me. That’s kind of how I learned and I just stuck with it. I don’t think it really matters what you use as long as you know your tools well enough to get the sound that you want.

TRHH: What software are you using now?

Audible Doctor: Right now I use Acid Pro. I literally had to downgrade the operating system on my computer it’s such an old program. I use Reason and Pro Tools primarily.

TRHH: Do you find that you’re more pleased creatively by emceeing or producing?

Audible Doctor: I don’t know, I go through different phases. Producing comes more naturally to me. It’s easier for me to do, I can do it quicker, and it flows a little easier. I really enjoy doing both. I like rapping just as much; it’s just harder for me to write than it is to make beats. I think that’s why people know me as a producer more because it’s easier for me to get it done quickly and get as much out. I love doing both. It’s just a matter of what mood I’m in at the moment.

TRHH: Were you at Fat Beats when they shut down?

Audible Doctor: Yeah I was. I’d been at Fat Beats around six and a half years. I started interning and I eventually worked up to become the manager and buyer for the store. I think a month before it actually shutdown I had moved to the warehouse so I was running the website for a little while. I was there right up until the end.

TRHH: What led to the shut down and what was your experience like there?

Audible Doctor: The reason the stores had to close is the reason the industry is the way it is. There really is a lack of support as far as physical product goes. It’s really hard to sell enough to keep a storefront open, especially vinyl, because Fat Beats focused so much on vinyl, if you focus on an underground Hip-Hop market. I think if we were to expand in different genres of music and different products we could have kept the store open. The reason it closed was the lack of support. I was the buyer for the store and I saw the numbers dwindling. Over the years when a new record was released I would order X amount and the next year I would order half of that because it wouldn’t sell as much. The next year I’d order a quarter of that. Literally people would stop coming in because they were illegally downloading things and there was no reason to buy the physical product anymore. It still is that way. It’s gotten to the point where there really is a small fan base that’s gonna buy whatever you drop no matter what. They’re going to support it and spend money on it regardless of if they can download it illegally. They will support you as an artist, but it’s really down to them.

That’s where we’re at now. You kind of have to cater to your core fan base. The general public doesn’t need to buy it anymore. The DJ’s that would come up and pick up the new 12 inches to play in the club don’t have to anymore. They just download the mp3, use Serato, and rock like that. They don’t have to spend the money anymore so you’ve lost all that income. I mean, it’s how the industry is now. You kind of have to evolve, change, adapt, and market based on how it is now. As far as being at Fat Beats I think I owe my entire career to that. Coming from Wisconsin where I’m originally from, I moved to New York and ended up at Fat Beats and it’s really where I learned everything about the industry. Just being able to see the different artists and the history of Hip-Hop, especially in New York, and being invited to shows and parties, and being able to study the scene and how Hip-Hop has evolved and where it came from was phenomenal. I don’t think I’d be the same artist if I wasn’t there.

TRHH: How did you end up hooking up with Genesis Elijah for the ‘Dear Kanye’ song and did you have any apprehension about doing that song based on the content? It wasn’t like a diss, but it was kind of a touchy subject.

Audible Doctor: I originally linked up with Genesis because after I produced the Joell Ortiz ‘Battle Cry’ joint with Just Blaze, Genesis heard the joint and reached out to me and asked if he could freestyle over it because he really liked it. Ever since then I’d send him beats and we’d work on things here and there. So when he reached out I hit him with a few and he liked that joint. He recorded it on Christmas Eve and sent it to me. He said, “This is what I did with it. Let me know what you think.” I liked it. I think it’s dope because it’s not him being like, “Yo, Kanye you suck, you sold out!” It’s a really genuine heartfelt opinion. That’s him speaking as a fan to an artist that he loves and feels is a great creative mind who has kind of lost his way. Regardless of how I feel about the situation I think it’s a dope, genuine, and really real song. Regardless of how you feel about Kanye or Genesis talking to Kanye or whatever, I think it’s Genesis’ message and it’s a dope track – you can’t deny that.

TRHH: How’d you wind up doing the ‘This is Murder Not Music’ joint for 50?

Audible Doctor: It’s funny ‘cause it’s the same beat [laughs]. Before I sent Genesis the beat I met one of G-Unit’s A&R’s at Fat Beats a long time ago. I got his contact info and had been sending him beats here and there over the years. I sent him a batch of beats in like November and never heard back from him. I kept it moving and ended up doing the joint with Genesis. We put the track out and the video out and a week later 50 Cent’s joint drops and it’s the same beat. What actually happened was they liked the beat and used it. 50 obviously put it out on New Year’s Day, but the A&R that I normally speak to happened to be out of the country on this day. He wasn’t there to let me know they used the joint. He just recorded it, put it out with this engineer, and just dropped it without informing me because the A&R that was handling that wasn’t in town. Since then I’ve spoken to them and we’ve cleared it up. They gave me the credit and everything but it was one of those weird miscommunication things where the guy who was the link between me and him was out of town so he couldn’t handle it so they said fuck it and just dropped it.

TRHH: Is there any talk about you having placement on the next 50 album?

Audible Doctor: He has a couple of joints. He has that song and another full song that I produced recorded already. I’m still hitting him with more joints. I just hit him with a batch of beats the other week and I’m about to hit him with another batch of beats tonight. Until they sit down and narrow it down to what’s going on what project there is nothing guaranteed. It’s possible that I’ll have some joints on his album; it’s possible that I might not. We’ll find out.

TRHH: What artist would you like to produce for that you haven’t had the chance to yet?

TRHH: They all have similarities.

Audible Doctor: Yeah, you can definitely hear where I draw my influence from.

Audible Doctor: As usual I have a lot in the works. I always have like fifty projects I’m working on and I don’t know what’s dropping when. The things that are guaranteed to drop soon are The Spring Tape which is the next installment of my seasons EP series. I dropped the Winter and Summer tape last year. This year I’m doing the Spring tape and the Fall tape. I have another full-length album with an artist that I’m working with from Detroit that we’ll be announcing somewhat soon. That should be dropping a little later this year as well. My group The Brown Bag All-Stars has an album dropping later this year. I have a lot of other projects in the works but those are probably the next projects that I’m doing this year.

Purchase: Fredro Starr – Made in the Streets (produced by Audible Doctor)

Sherron Shabazz is a freelance writer with an intense passion for Hip-Hop culture. Sherron is your quintessential Hip-Hop snob, seeking to advance the future of the culture while fondly remembering its past.
View all posts by Sherron Shabazz →
This entry was posted in interview and tagged 50 Cent, Audible Doctor, Brown Bag All Stars, Dear Kanye, Everyday Hell, Fat Beats, Fredro Starr, Genesis Elijah, interview, Made in the Streets, Onyx, producer, This is Murder not Music. Bookmark the permalink.