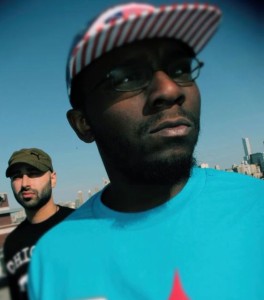 One of the best albums of 2013 was Cult Classic by Denmark Vessey and Scud One. Denmark, an emcee originally from Detroit moved to Chicago and linked up with producer Scud One. What followed was a concept album about a man who seeks money and power in the name of religion.

Cult Classic is a sonically pleasing album that pushes the boundaries of what rap is lyrically while keeping it Hip-Hop. The album is produced entirely by Scud One and features appearances by Guilty Simpson and Quelle Chris.

Denmark Vessey and Scud One spoke to The Real Hip-Hop about their musical union, their future plans, and their critically acclaimed album, Cult Classic.

TRHH: How’d you come up with the concept for Cult Classic?

Denmark Vessey: I kind of grew up in the church. I went to a private catholic school in Detroit. It wasn’t like a prestigious private school, it was in the hood right next to Herman Gardens. I would up going there so religion has been a big part of all of my life. They always say that it takes all of your experiences up until that point to make your debut album. This is my debut album, and it’s my take on how I see things. Not just religion, but people in power, and people who have power and influence.

TRHH: How’d you hook up with Scud One?

Denmark Vessey: I used to record at the same spot that he used to kick it at. I would always see him and said, “You should get on a joint with me,” as a rapper because I didn’t hear him as a producer yet. The joint was dope and fast forward maybe a year later we wind up getting a studio together. I was doing beats at the time, well, I still do beats but he sent me a couple of beats that he did and I said, “We might as well try to go head and knock some stuff out.” Two songs turned into three, three turned into an LP. It was real organic, real smooth.

TRHH: Being a producer yourself, was it hard to hand over the reins to Scud?

Denmark Vessey: Yeah, yeah it was [laughs]. I take that part serious myself. It was a challenge for me to allow somebody to do that and not be so uptight about that aspect and challenge myself to see if I can do that. I make a lot of music with Quelle [Chris] and it’s a quick sixteen and I’m done. This is like a challenge to me to make a whole album primarily with me just rapping on it. That doesn’t mean that it was a difficult experience, it was just more so a new thing. A lot of times he’d make the beat on the spot or I’d write on the spot and it was no longer than a day that we’d have a song finished from start to end.

TRHH: Scud, how was it for you also being an emcee to step back and produce the whole record? I think you only rhymed on one track, right?

Scud One: Yeah, I only rhymed on one track. It’s kind of a similar question. It’s also kind of a similar answer. It was obviously different, but at the same time it was refreshing for both of us, too. Take a step back from what we usually do and kind of put in a little bit of extra work on the other side of things. I think the turnout was a beautiful thing. Overall it was an enjoyable process. There were a couple of joints on there where I was like, “Man, I wanna rhyme on this,” but Denmark took it and it all seemed to work out. It was a pretty quick process as well. We didn’t have too many hold ups as far as songs. I kinda made the beat, this dude knocked out the rhymes and it was pretty much that.

TRHH: I really dig your sound, man. Who are some of the producers that inspired you?

Scud One: This is one question that I try to not go too in depth with. As a producer I kinda just took what I listened to and not really what other people were doing. There is a lot of music that I listen to already and just decide to flip it with my own style. As far as who I listen to, I listen to all the classic Hip-Hop stuff. A couple of people asked me if I listened to Madlib or Dilla, of course, I listen to all of that. I listen to everything. As far as a specific influence I don’t really have one that I modeled my sound after. I’m really just trying to do something unique and original.

TRHH: What beat-making equipment are you using right now?

Scud One: Right now I got an MPC 2000XL. I hook that up to Pro Tools. I have other things here and there. I’ll even pull up Fruity Loops nowadays and mess with something like Reason. I’ve always liked software, but I’m getting more and more into the hardware too because it’s a lot more to experiment with.

TRHH: Denmark, what led to your move to Chicago?

Denmark Vessey: I grew up in Detroit my whole life and it was just getting to the point where I didn’t wanna be there anymore. It’s as simple as that, really. I went to Chicago when I was like 18. In my senior year they picked a couple of visual artists, I used to draw a lot, to come to Chicago and I thought it was a dope ass city. It’s a thriving city and an international city. That’s how I see Chicago. That’s what drew me toward that city. I started running with Quelle and he was in Chicago before us. He was like, “Yo man, if you ever get tired of being here you should come through to Chicago,” so that’s what I did. My grandmother had just passed away and I didn’t wanna be there no more. After five years I fell in love and all of that stuff.

Denmark Vessey: Yeah. It’s definitely a different type of feel there. In terms of foundational stuff, at the core, yeah, we’re cousins. A lot of people from Chicago got people in Detroit and vice versa. It’s only six hours away so it’s not a huge world of difference, but I’d say that there’s a difference. I notice a lot of things where I’d say, “Oh, that’s some Chicago stuff right there,” [laughs]. It’s different to me but it’s all love at the end of the day.

TRHH: You mentioned that you were an artist; Kanye West also said that he was an artist. He talks about how he sees music in colors. I still don’t even know what that means. Can you relate to that?

Denmark Vessey: Yeah it’s called Synesthesia. I do relate to that. I’ve always seen colors. Everybody’s got their own thing and they may not know everybody else’s experience so they don’t say anything. As far as I remember I’ve always been able to see shapes in terms of different instruments and colors as well. It’s probably a more common thing that a lot of people know about it. I definitely see colors with all instruments. It’s a real thing.

TRHH: Did you worry at any point that the album would offend people?

Denmark Vessey: Yeah, but something is going to offend somebody. Somebody is going to be offended by something no matter what anybody does or says. This is art. It’s up for interpretation. You like it, that’s cool. You don’t like it, that’s cool, too. My aunt is a pastor and I got people that are heavily involved in church and I’m definitely not trying to make them feel any type of way. It’s art. I don’t think it was offensive. One person said the cover was blasphemous, but that’s a whole ‘nother talk.

TRHH: Talk about why you chose the rap name, Denmark Vessey?

Denmark Vessey: I chose Denmark Vessey because I thought the actual name was really powerful. It’s not his real name. His real name is Telemaque, which is Haitian. I chose it because it sounded powerful and the story was so dope behind it. He actually didn’t get to complete his mission, which was to have a revolt. Another slave told on him. I’m into people’s state of mind. That slave thought it was cooler to tell on the slave that was actually trying to liberate him. He felt more comfortable trying to appease the slave master. It’s like Stockholm syndrome where the person in captivity starts to sympathize with the captor. I think all of that stuff is interesting, how you can mold the mind. People want to survive so they’ll do anything. They’ll change their whole mind state just to survive. I just thought that was an ill story. And the way he died was real dope. Obviously they hanged him and he said some real ill words. His last words were on some super G shit. Some Bruce Willis type shit.

TRHH: Are you surprised by the reception you’ve received for this album?

Denmark Vessey: No. Honestly I wanted it out so people could hear it. I try not to really pay attention to the reception just because of the age that we’re in. Everything is so “of the moment” so while I do absolutely appreciate any kind of positive feedback that we got, only time will tell. I named it Cult Classic because I wanted to put that in people’s heads so ten years down the road people would be like, “Cult Classic is crazy!” That’s cool, but right now is dope, too. It’s not like I’m like, “Fuck all this stuff,” this shit is great, it’s awesome. I really wanna see how it does in five years and see if people will be talking about it with the same vigor. Will it be more? Will it be less? I have a long career ahead of me so…

TRHH: What’s next up for you? What do y’all have coming up?

Denmark Vessey: I have a lot of music coming out. I got a couple of EP’s coming out. One with a gentleman named T-White. T-White did all the beats and me and Scud One are rapping on it. I got my solo album coming out which is kind of like the prequel to Cult Classic which is called Chemtrail Soup. I have a four-piece band called Storefront Church. It’s all over the place as far as what we’re doing. It’s on some Cake or Damon Albarn stuff. I like stuff like that so that’s where I’m trying to go with mine. I’m trying to see what’s up with Crown Nation. We’re supposed to be finishing something by fall. We’re a couple songs deep but we’re trying to make sure it sounds good and works for everybody’s schedule. I got tons of music.

Scud One: I have the EP coming out with Denmark and T-White. I got a ton of feature production that you can look out for. I got a join on Fatt Father’s next record. The homie Cavalier who was on Quelle’s joint, I did an outro on his joint. I’ll probably do a solo record on some rapping type stuff, and the same old production, man. I’m just trying to innovate and expand on the idea.

Sherron Shabazz is a freelance writer with an intense passion for Hip-Hop culture. Sherron is your quintessential Hip-Hop snob, seeking to advance the future of the culture while fondly remembering its past.
View all posts by Sherron Shabazz →
This entry was posted in interview and tagged Crown Nation, Cult Classic, Denmark Vessey, HoeininDaGaddaDaVida, interview, Scud One. Bookmark the permalink.