A Conversation with Dinco D

Posted on September 19, 2014 by Sherron Shabazz 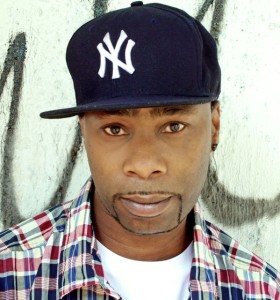 In 1991 a group called Leaders of the New School burst onto the scene with a colorful and energetic presence that had never been seen before in Hip-Hop. Charlie Brown, Busta Rhymes, and Dinco D each had completely different rhyme styles that managed to mesh together perfectly to create the Leaders sound.

The group released two albums, 1991s ‘A Future Without a Past…’ and 1993s ‘T.I.M.E.’, but are most known for their appearance on A Tribe Called Quest’s classic single ‘Scenario’. The group disbanded due to internal conflicts, but each emcee maintained their presence in Hip-Hop.

One member of Leaders in particular, Dinco D, left his imprint on 2014 with the Dinco De Mayo mixtape. Dinco’s latest release is a collaboration with Brooklyn rock band Shinobi Ninja called ‘MeUWe’.

Dinco D spoke to The Real Hip-Hop about his start in the rap game, the breakup of Leaders of the New School, his current projects, and the possibilities of a Leaders reunion.

TRHH: Take me back to the very beginning. How did you start emceeing?

Dinco D: My brother had a local crew that had a DJ set. I used to bring records to him. I watched him coming up and picked it up on my own from there.

TRHH: How’d you link up with the other guys in Leaders?

Dinco D: We grew up together from elementary. Brown grew up three blocks from me. I went to school with his sisters. They were in my grade, Brown was a grade ahead of me, and Busta lived across town. I was doing stuff on my own and Brown seen me one day through a mutual friend and we connected since then.

TRHH: What role did Public Enemy have in your early career?

Dinco D: Public Enemy gave us our first big show. We opened up for them at a show in like ’88. It was our first big show out in Baltimore. Chuck D was like our tutor or our professor. He spoke to us about the music business, the industry, building a group, and he gave us the name Leaders of the New School. He gave Busta Rhymes his name and he gave Charlie Brown his name too – I just kept my name.

TRHH: The first album had a couple of hits on it. What was the group’s mentality going into Future Without a Past?

Dinco D: We was still in school so we wanted to make it relatable. We tried to keep the idea and the concept of the whole school thing. We all had samples. I used to have a lot of samples from my father’s record collection and we used a lot of those samples for the album.

TRHH: Let’s talk about the Tribe record ‘Scenario’. How did that song come about, and did you think it would be as big as it became?

Dinco D: We was both doing our thing around that time ‘cause we had been coming out doing shows. Finally at the same time when both of us was out we connected. Tip had talked about doing a song, everybody pushed it and we went over there and did it. We had did like four songs. It was different people on that song. Dres from Black Sheep was on there, Chris Lighty was on a version, De La Soul was on a version, Jarobi – we did like 3-4 versions. Finally we decided to narrow it down to us four and by the time we went into the studio to do the final version we knew it was a hit when we finished the record. Everybody did their verse right there. We went one-by-one and when everybody came out from doing their verse it was cheers.

TRHH: Do you think that’s the greatest posse song ever?

Dinco D: It’s the only record where the original and the remix was played like it was both singles.

TRHH: I saw you guys perform on the Public Enemy tour with Tribe back in ’91 with some heavy acts like Geto Boys, Naughty by Nature, Jazzy and Jeff and the Fresh Prince, Latifah…

Dinco D: MC Lyte, yeah. It was different regions. We were on the Midwest dates of the tour. We didn’t do the West Coast dates, but we were on most of the dates for that tour.

TRHH: I remember you guys got almost no stage time. It was like two songs and y’all was out…

Dinco D: Yeah, it was about three songs.

TRHH: That’s crazy because Low End Theory was like the hottest record at the time. What was it like being on that tour with so many established acts?

Dinco D: It was a powerful tour. It was like 8 groups on that tour. It was fun. Some dates we would get a little extra time or we would catch the right crowd because we went on pretty early. Most of the dates we caught it was a real good tour.

TRHH: Dante Ross said on a podcast that the second album T.I.M.E. was wack. Was the chemistry off with you guys on that record and do you view it as being wack?

Dinco D: Hell no! That album is powerful. That was a classic album. Dante Ross really didn’t have too much to do with that album so he was a little upset. If he don’t have his hands in something he don’t really like to talk about it. We wasn’t really getting along with Dante Ross because they were doing a lot of shady stuff up at the label and he was involved in it. That album was classic, man. By that time we were so lyrically aggressive. The first album was a concept album and now that we’d proved ourselves we wanted the freedom to do what we do and lyrically go at it. It was a competitive album. It was lyrically dope and we were all at our prime in lyrical skills.

TRHH: You produced the song ‘What’s Next’ on that album, right?

TRHH: That song is incredible. I still bump that to this day.

TRHH: No doubt. Give us the story behind creating that song.

Dinco D: I was the first one to have an S950 and get my equipment at the crib. When we was traveling I used to buy records, come back, and work on stuff. When I found that sample I was like, “This is the song, I got it!” I went and made it at the crib upstairs in my house. We all had one song that we wanted to produce. We had different producers for the album but that was my song. I found that sample and I added on stuff. Brown helped me formulate some of the pieces with it. It was just a dope song. Nobody can deny that. That’s a dope record.

TRHH: On the outside looking in it seemed like Charlie Brown was the culprit in the split of the group, but I’ve read interviews with you that made it seem like Busta was responsible. To set the record straight, what’s the real story of the breakup of Leaders?

Dinco D: You know what, everybody had their part to do with it, man. The main part was the outside part. It was Dante Ross. Dante Ross was a part of the split-up, Lyor Cohen, and our management. There was a chance for Busta to stand his ground and tie it together where he could still do his solo thing and we could still make Leaders albums. Outside forces really worked on the split-up. He took it — ain’t nothing wrong with that. That just led to a wider crack opening the crack up for other things.

Dinco D: Yeah! [Laughs] Listen, he was a part in breaking up a lot of groups.

TRHH: Why would he do that? How does that benefit Lyor?

TRHH: So it’s basically about how they can get rich off of it.

Dinco D: Yeah, exactly. They take the key element out, or what’s hot right now and get rich off of it.

TRHH: I saw you perform on the Hip Hop Gods tour a few years ago. What was that experience like for you?

Dinco D: That was dope, man. That was dope. Brown was actually supposed to come out on that tour with me, but at the last minute he got sick and couldn’t make it. I had to handle that whole tour by myself. I had to change my show and do different stuff. It was a great experience though. I stepped up and handled that and it benefited.

TRHH: How did you wind up working with The Bigg East?

Dinco D: One of the dudes is my barber, he live in my house. The other dude is his cousin. I met them when I moved back to Long Island after moving from Atlanta. That’s how I connected with them cats.

TRHH: So you’re back in New York?

TRHH: What led you back to New York?

Dinco D: Right now I’m working on building some tours. I’m working with Chuck and the Bomb Squad on some more Hip Hop Gods stuff. I got some stuff coming with some other cats – The Bigg East. I’m working on an album with different bands. I got a single coming out that’s going to be crazy with Shinobi Ninja. I got a lot of projects. I’m just keeping busy and entertaining and making sure I leave a mark of some new stuff to give them an idea, man.

TRHH: Is there any truth to the rumors that there will be a Leaders reunion?

Dinco D: We talk about it. I talk to Busta here and there. It’s going to have to be up to him to step outside of his box and what he’s doing and make time for it. He talks about it, we’ve talked about it, so we’ll see, man.

Sherron Shabazz is a freelance writer with an intense passion for Hip-Hop culture. Sherron is your quintessential Hip-Hop snob, seeking to advance the future of the culture while fondly remembering its past.
View all posts by Sherron Shabazz →
This entry was posted in interview and tagged Dinco D, Dinco De-Mayo, free, interview, Leaders of the New School, MeUWe, mixtape, What’s Next. Bookmark the permalink.