A Conversation with Esoteric of CZARFACE 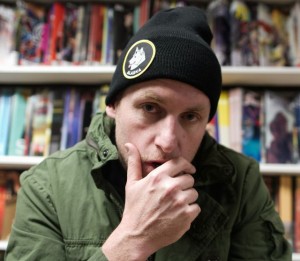 In 2013 7L & Esoteric joined forces with Inspectah Deck from the Wu-Tang Clan under the banner of a comic book character named “CZARFACE”. Their self-titled album seemingly came out of nowhere and became one of the best Hip-Hop releases of that year. The band is back together and recently released their follow-up album to CZARFACE, “Every Hero Needs a Villain”.

Every Hero Needs a Villain is produced by 7L and Spada4 and features appearances by Method Man, GZA, Large Professor, Meyhem Lauren, R.A. the Rugged Man, JuJu of the Beatnuts, and MF Doom.

One-third of CZARFACE, Esoteric spoke to The Real Hip-Hop about reuniting with 7L and Inspectah Deck for a second go round, his memories of late wrestling legend Dusty Rhodes, and his new album, CZARFACE.

TRHH: Explain the title of the album, Every Hero Needs a Villain.

Esoteric: This speaks to the unpredictable nature of CZARFACE. Is he a hero? A villain? Can he be both? Does it depend on who is rhyming? Is he a villain to the city but a hero to the people? Tune in next episode!

TRHH: What made you guys decide to come back for another CZARFACE album?

Esoteric: Mainly because the first one was a lot of fun to make and we can just attack the canvas with no rules. It’s a no DQ match every time out the gate with CZARFACE that’s why it sounds how it does. The rhymes, ideas, and inspiration never stop coming and the CZARFACE character himself had some growing to do so we took it there for round 2. In some senses the positive feedback from the first album reinvigorated all three of us, so we were motivated to give them a second issue.

TRHH: One of the singles on the album ‘Nightcrawler’ features Method Man. How’d that song come together?

Esoteric: The beat came first from 7L. I told him we wanted some up tempo stuff since tracks like “Savagely Attack” and “Word War 4” off the first album were around or over 100 beats per minute, and we wanted to get some of that vibe on here. I played it for Deck, he said “I think Mef would sound good on here,” and I said “No doubt, can you make that happen?” Sure enough, he swooped in and made it happen. I acted cool and laid back about it, but when he suggested getting Method Man on the joint I was hype.

TRHH: The wrestling influence is heavy on this album. Was that premeditated or did it just turn out that way?

Esoteric: A lot of the sound bytes I search for to sprinkle between the verses are from that arena so to speak, and it’s just something that I always like digging for because there are so many interviews and promos where wrestlers are essentially saying the same things an emcee would say, just angrier and with far less finesse. There was a lot of that on the first CZARFACE album too, and it has always been in my repertoire, even going back to 2004 when we kicked off our 7L & Esoteric Bars of Death album with a Dusty Rhodes monologue, Rest in peace.

Esoteric: I used to watch him all the time at my grandmother’s in Dorchester in the 80’s. I used to like going there every weekend because I knew I could watch wrestling uninterrupted. But no wrestling memory ever tops the time my father brought me to Baltimore, Maryland in 1987 to see the Crockett Cup. Dusty Rhodes tagged with Nikita Koloff as “The Superpowers” and defeated Lex Luger and Tully Blanchard for the Crockett Cup. They wrestled a few times that night because it was a tournament, and it was cool to see them live, along with the Road Warriors. My dad was never into wrestling, in fact he hated it, but he brought me all the way to Baltimore to see these guys wrestle because I loved it. The NWA/WCW promotions never really made it up to Boston, so we had to travel down there. I will never forget sitting in the crowd and I pointed at this little man with a denim jacket, earring, beard, glasses, a pony-tail, and a bunch of wrestling buttons on his collar. I said to my dad, “I’m gonna be like him when I grow up,” and my dad shot me this stern look and said “No, you’re not!!!” so I did this Hip-Hop thing instead [laughs].

TRHH: The song ‘Ka-Bang!’ features MF Doom. He’s a bit of a recluse. How on earth did you track him down to do this?

Esoteric: Our boy Egon from Now Again, and formerly Stones Throw. He booked us in the late 90’s to rock with Madlib and Peanut Butter Wolf. We established a friendship then and stayed in touch for years. He put us down with Doom and made sure he was familiar with CZARFACE and what we were doing. Our relationship with Egon back in the 90’s actually came from our relationship with Matt Slywka, who interned at Loud Records, and connected us with Deck in 1999 to do “Speaking Real Words” while managing me and 7L. It may sound confusing, but the history with Egon and Slywka led to collaborating with Deck in ’99 which eventually led to CZARFACE many years later, and that ancient history with Egon led to getting MF Doom on this album, kinda [laughs].

TRHH: Will there be a CZARFACE tour?

Esoteric: Working on it now!

Sherron Shabazz is a freelance writer with an intense passion for Hip-Hop culture. Sherron is your quintessential Hip-Hop snob, seeking to advance the future of the culture while fondly remembering its past.
View all posts by Sherron Shabazz →
This entry was posted in interview and tagged 7L, 7L & Esoteric, Army of the Pharoahs, Boston, Czar Guitar, CZARFACE, Demigodz, Esoteric, Every Hero Needs a Villain, Inspectah Deck, interview, Ka-Bang!, Nightcrawler, The Great, The Great (Czar Guitar), Wu-Tang Clan. Bookmark the permalink.