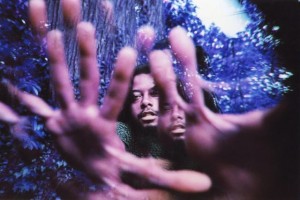 Myke Bogan kicked off 2015 with the release of the single “Metal Explosions” to hold fans over until the release of his next project, a mixtape called “Casino Carpet” to be released on his Soundlapse label. Myke Bogan’s continued success recently earned him a spot on King Chip’s “Royal Tour” along with fellow Portland rapper Tre Redeau.

The Real Hip-Hop spoke to Myke Bogan about the Portland Hip-Hop scene, touring with King Chip, and his upcoming mixtape, Casino Carpet.

TRHH: How is it performing on the Royal Tour?

Myke Bogan: It’s been an amazing experience. When I first started rapping “The Cleveland Show” was one of my favorite mixtapes. To be on tour with Chip Tha Ripper now is crazy.

TRHH: What’s been the livest city so far?

Myke Bogan: Hands down, Madison, Wisconsin. Madison went crazy! I had no idea the love for Hip-Hop there. It was crazy — the crowd participation, the energy, it was packed, it was awesome.

TRHH: A lot of people say that. Every time I interview someone on tour they say Madison is the best city. It’s a college town…

Myke Bogan: Right! And it’s crazy because when I walked in I asked the promoter if he was worried about the show because school just let out and he was like, “No, bro. Madison is nonstop, 365.”

TRHH: The new single ‘Metal Explosions’ is dope. Tell me how that song came together.

Myke Bogan: Thank you, man. Basically one of my friends that produces my beats was like, “I haven’t heard you really snap lately. You’ve been on your smoker vibe and making smooth tracks and it’s been amazing, but I wanna hear you snap again.” He made that gritty, grimy beat for ‘Metal Explosions’. It came about because rappers are always rapping about money, cars, and clothes – the cliché rapper stuff. What I did with the chorus was I’m basically talking about everything I don’t have. The whole, “Money, money, money on my mind,” and “I been gettin’ money all my life,” that’s a lie. I go into the hook and I’m like, “Trying to keep it cool, never snooze, and I never sleep hardly/Couch surfing through a pool party…” and it’s basically all these things that you can’t do. You can’t couch surf through a pool party. All the stuff that is so cliché and contradictory I just wanted to put that into a chorus and say, “That’s not what I’m about.” I guess just going against the grain is pretty much how it came about.

TRHH: Silk Jockstrap is one of the illest titles ever [Laughs]. How’d you come up with that name for the EP?

Myke Bogan: [Laughs] I was doing songs and wanted to put something out. The songs are pretty smooth and I wanted to put a tape out so I wanted something smooth and free. Me and my boy were smoking one night and he said I should call it “Silk Panties”. I said, “I can’t call it that. We gotta make it something smooth but free.” I’m like, “Jock strap. A silk jockstrap, how comfortable would that be?” So we ended up calling it “Silk Jockstrap” and it worked out. People loved it.

TRHH: Portland is not a place you hear about when you talk about Hip-Hop. What’s the Portland Hip-Hop scene like?

Myke Bogan: We don’t get the recognition we deserve. I believe because one, we need to band together more as a Hip-Hop community. Two, artists need to get better at getting their selves out there. Artists need to get on the road, artists need to drop more, more projects, and do it right. I feel like people in Portland are dropping a lot of music but the game is so watered down now. If you don’t drop correctly it’s not going to get the recognition it deserves and it’s just gonna be a project wasted. We as Portland artists do have to band together and do a better job but the scene is amazing.

Tre Redeau, Vinnie Dewayne, Illmaculate, Glenn Waco, Mic Capes, they’re all great artists. It’s surprisingly a brutal place, man. Traveling on the Royal Tour and seeing other people’s live performances, it gives me a new respect for Portland. Performing in Portland is very hard. It’s very Hip-Hop, it’s very gritty, they’re waiting to boo you, and kick you off the stage. I was telling Chip’s DJ, DJ Fade, “Portland’s one of the few places where people aren’t just going to show up and go crazy ‘cause it’s live music. You have to earn the trust and respect of the Portland fan base.” The northwest is still very Hip-Hop when it comes to that and I appreciate that. I wish it got more recognition, but hopefully here in the near future we can get that going.

TRHH: “SGDB” is a dope song from the EP. Your music is pro-marijuana and Oregon is one of the few states to legalize it for recreational use. What impact has that had on you personally?

Myke Bogan: I think it’s pretty cool that people are starting to come around and legalize it but it really didn’t affect me that much, besides getting it from a dispensary instead of somewhere else. I was gonna smoke regardless, but having it legalized is really cool.

TRHH: What’s next up for Myke Bogan?

Myke Bogan: At the end of July/early August Casino Carpet my next mixtape, it is ten tracks that are all produced by Lefty out of Los Angeles. It’s super smooth, man. It will be an amazing tape for the summer. It’s something to chill to, something to smoke to, and something to vibe to. It’s summer-esque. It’s built to light one up and chill. Light one up and play FIFA [laughs]. That’s what it’s made for and that’s how it was composed as well – doing just that.

Sherron Shabazz is a freelance writer with an intense passion for Hip-Hop culture. Sherron is your quintessential Hip-Hop snob, seeking to advance the future of the culture while fondly remembering its past.
View all posts by Sherron Shabazz →
This entry was posted in interview and tagged Casino Carpet, interview, Metal Explosions, Myke Bogan, Portland, Royal Tour, SGDB, Silk Jockstrap. Bookmark the permalink.