Posted on February 8, 2016 by Sherron Shabazz 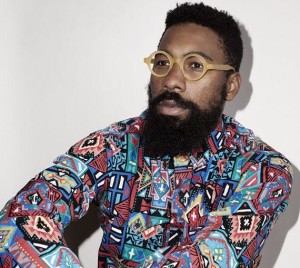 What began as an idea to teach primary education and social lessons to kids through rap music and urban culture has materialized in the form of a children’s book called Rappin’ Ricky: Block Party. The books author is emcee, F.Stokes. Originally from the Midwest, Stokes has called both coasts home and implemented each regions influences into his music.

Always thinking outside of the box, F.Stokes started a Kickstarter campaign in the summer of 2015 in support of Rappin’ Ricky that reached its desired goal in just three weeks’ time. The result is Rappin’ Ricky: Block Party, a mixtape called Rappin’ Ricky: Radio, and various educational videos.

F.Stokes spoke to The Real Hip-Hop about all things reading and rappin’. Stokes discussed the importance of highlighting the unpublicized side of black America, delves into his love for early 80s Hip-Hop, and tells us what the future holds for Rappin’ Ricky.

TRHH: How did you come up with the idea for Rappin’ Ricky?

F.Stokes: I’ve always wanted something on bookshelves and on TV animation-wise for the young kids that really reflected the positive things in our community. I wanted to reflect the Trayvon Martin story that the media really didn’t amplify. I think it’s important to show how unified we really are, how tribal our community is, how we encourage and support our youth. Rappin’ Ricky became a vessel for me to get all of these ideas out and to paint the image of the young black kid that we both know, but the world doesn’t know necessarily. It’s really important that us as leaders, you as a journalist and me as an artist, give people a passport into our community and allow them to see how protective we are, allow them to see how loving we are, and how intelligently brilliant we are. Rappin’ Ricky is a very, very intelligent kid. He’s a young social maverick. Part of it is due to survival and part of it is due to him being a child in a community that’s supportive.

TRHH: What’s the reception been like for the book?

F.Stokes: Super-positive. We released it a few weeks ago and have sold upwards of 300 copies. That’s with no press really and this was like a preliminary release for our Kickstarter backers and friends and family. The demand became so high that we had to go back and print more to sell – people just wanted it. It’s been remarkable, really and it’s only going to increase. We have a couple of schools lined up to buy 50 apiece. I’m big on presentations. If I had to do it over again I would probably give it a little more time and release it in March or so, which we will do when we do the re-release. People are hungry for it so I gave it to ‘em.

TRHH: There’s also a mixtape that accompanies the book called Rappin’ Ricky Radio. How did that idea come about?

F.Stokes: Rappin’ Ricky Radio is kind of a precursor to where I wanna go musically with Ricky. I want to create a radio station that is completely geared toward educational, inspirational, empowering Hip-Hop music. Rappin’ Ricky Radio is kind of the introduction to that. I think books are great, I think literature is fantastic, but in today’s market you have to create something that’s a reflection of pop culture for kids to really get it and Hip-Hop is that. It’s almost like a natural progression for me. It’s one of those obvious things. I wanted to be able to make a song about personal hygiene and taking care of your body and make that song as big as a Nicki Minaj song or a J. Cole song.

TRHH: In early 2015 you released an EP called “A Princess named Leroy” that was also very unique. What was the inspiration behind that project?

F.Stokes: I wanted to produce an EP that took us back to the early and mid-80s. I also wanted to highlight the significance of deep house music and how it connects to Hip-Hop. A Princess named Leroy just gave me the perfect foundation and platform for that. To fully entrench myself I had to create a whole ‘nother character and Leroy became that character. I had to give it almost a Gnarls Barkley type feel to make it authentic. I think we killed it. In fact, we’re re-releasing A Princess named Leroy in a couple of months as well to give it some light and some shine. It’s such a dynamic project, man. Everything with that project came together perfectly. That could not have happened if I didn’t become Leroy.

TRHH: Why was Leroy a princess?

F.Stokes: It’s kind of a metaphor. There has been some of the greatest wars in the history of mankind over the protection of princesses. To make Leroy fit that quality as a creative he wasn’t accepted in his community because he wanted to express himself through how he dressed and different genres of music that would be considered feminine in our community. That’s where the princess part comes into play. It gave Leroy a level of glow, it gave Leroy this pristine quality, and a level of pureness and the work kind of reflects that.

TRHH: The single “The Slums” was inspired by early 80s Hip-Hop. Are you a big fan of that era and why do you think that time in Hip-Hop has been sort of forgotten?

F.Stokes: I’m a big fan of that era because I’m 34-years old. The 80s was like the most fucked up years and also the greatest decade in the history of African-American’s in this country. The crack epidemic, the introduction of the Uzi, and all these things were divisive and crippling to our community, but at the same time these things helped make us brilliant business men and taught us about product and demand. It’s interesting how something that completely stripped our community in the 90s we began to reap the benefits of it with the Master P’s and J. Prince’s. I’m a fan of the 80s, I’m a baby of the 80s and how things were done in the 80s even though it was New Jack City. I think in the 80s music there was no pop. Everything reflected the community. You saw something happen and you fuckin’ wrote about it and recorded that music. You didn’t have the pressure of selling records because people didn’t think Hip-Hop was a viable genre just yet. They thought it would come and go or be around 10-15 years, but naw man, this shit is here to stay! The positive that, that perception had was it allowed the guys in the 80s to somewhat be reckless with the music to a degree and say whatever the fuck they felt. I wanted The Slums to be the greatest reflection of that. That’s why it’s so hard. That’s why it sounds like it was recorded in a fuckin’ project hallway.

TRHH: Tell me about the remix EP, Forever I Love Madison.

F.Stokes: That came out a couple of years ago. I basically wanted to put out something to show my love and appreciation for Madison, Wisconsin. We’re going to remix that – it’s happening right now. That’s the next move. The EP I did with Lazerbeak from Doomtree, Death of a Handsome Bride was remixed and that became F.I.L.M. My producers and my DJ are going to use some of the songs off A Princess named Leroy, remix those songs, and also add them to the whole F.I.L.M. collection.

TRHH: Tell me about your relationship with Madison. Why is Madison important to you?

F.Stokes: If I was a bit older and had some more patience, then yeah. I still got some really good years left in me of fuckin’ up, and as a mayor you can’t fuck up [laughs].

TRHH: Hey, Marion Barry fucked up and got re-elected [laughs].

TRHH: I do a lot of interviews with artists that come through Chicago on tour and periodically I ask them what’s the best city they’ve been to and all of them say Madison.

TRHH: I’ve had one guy tell me Madison was terrible.

F.Stokes: Get the fuck out, man.

TRHH: Yeah, they all say Madison is the livest city as far as the show. Why do you think that is?

F.Stokes: It’s such a chill town, bro. It sits on an isthmus, we have access to two lakes, it’s a beautiful town, the women are gorgeous, and there are a couple of new restaurants and bars that are great with mixed drinks. We have great food. It’s really just a beautiful town. Even if you’re having a bad day you are less than a mile away from a lake. You can walk to the lake and vibe out. In the summer time they have live performances almost every day on the lake. They like families, they like people of color, and they like helping people of color. So if you’re a person of color you’ll get a bunch of awesome shit that’s probably a reflection of white guilt, but it’s okay! [Laughs] It’s still great shit! We gotta be honest with it too, man. You’ll get a lot of free shit. If you’re an 18-year old single mother from the south side of Chicago they gon’ hook your ass up! You’ll be first in line for the section 8, you might get a car from the local church, all that fly shit to get on your feet! That’s why it’s an awesome town.

F.Stokes: Good question, man. I’m so insanely focused on Rappin’ Ricky right now, dude. I want to take it to the next level and make it an animated series. We will create Rappin’ Ricky merchandise so kids can wear the Rappin’ Ricky fly shit to school. Partnerships – I’m big on partnerships so you’ll see a lot of brands partnering when it comes to Rappin’ Ricky – a lot of cross marketing. Those are all part of the next steps.

Sherron Shabazz is a freelance writer with an intense passion for Hip-Hop culture. Sherron is your quintessential Hip-Hop snob, seeking to advance the future of the culture while fondly remembering its past.
View all posts by Sherron Shabazz →
This entry was posted in interview and tagged A Princess named Leroy, Block Party, book, F.I.L.M., F.Stokes, Forever I Love Madison, interview, Radio, Rappin’ Ricky, Rappin’ Ricky: Block Party, Rappin’ Ricky: Radio!, The Slums. Bookmark the permalink.