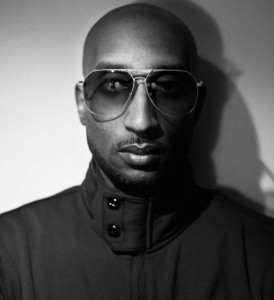 Tekh Togo is an emcee, producer, and a visual artist. His latest work of art combines all of his talents in one package. The Grand Rapids, Michigan resident created a full-length album reminiscent of golden era abstract Hip-Hop called “BlackWater”.

The Real Hip-Hop spoke to Tekh Togo about his role as both producer and emcee, his influences in the game of rap, and his new album, BlackWater.

TRHH: Explain the title of the new album, BlackWater.

Tekh Togo: BlackWater was a Special Forces military group. They made headlines for committing war crimes but not being punished, in Iraq mostly. The founder of the group has ties with the families of wealth that have a lot of pull in our town. So some of the album touches on politics, those in power, their greed, money and the trickle down effect of that into the streets. BlackWater also stands for the darker side, dark times, and stories from a darker frame of mind or space. Not necessarily what someone would consider bad or evil though.

TRHH: What’s the concept behind the single Dressed to Kill?

Tekh Togo: We’re tying in fashion with war and violence on different levels. Again from a street, political and geopolitical perspective. I’m trying to paint a different picture than the norm. Here’s a killers uniform, what they’re wearing in their environment and what’s going on. Cats are still dying and getting killed because of this or over this certain type of garment/high end luxury goods. Concepts we’ve heard before just trying to approach it from a different angle.

TRHH: Your style is unique. How would you classify the Tekh Togo sound?

Tekh Togo: Thanks! Most people try to throw me in the “you’re a golden era style rapper” category which some of my influences are rooted there, but I like to call my sound abstract art, lyrically and sonically. I’m really into trying to create a visual through the music but not so black and white, cut and dry.

Tekh Togo: Souls of Mischief made me really grab a pen and pad and seriously start writing rhymes. Nas and the Wu sealed the deal for me like, “Yo, I want to be illest at this rap shit or on the same level as them.”

TRHH: You produced many of the tracks on BlackWater. Do you prefer producing over emceeing?

Tekh Togo: No, I don’t really prefer one over the other, as long as I’m creating. It depends on my mood as well. If I’m hearing music in my head I’ll get behind the boards, if I feel like writing I would rather have a batch of beats from someone so I can just go in and cook up some blades.

Tekh Togo: Mostly an Ensoniq ASR-10. I have some live instruments I like to use too — guitars, bass, piano, some vintage synths and percussion.

TRHH: You worked with Mick Jenkins on the song End of the Rainbow. How did that collaboration come together?

Tekh Togo: I heard a track from his Trees and Truths mixtape I thought his sound was dope. It was different, but he can rhyme. I hit him up to see if he would jump on the record, he said, “Send it through.” He hit me back like, “I like what you’re doing,” and he knocked it out. So it was brief interaction via email, mutual respect from emcee to emcee.

TRHH: What do you hope fans gain from listening to BlackWater?

Tekh Togo: The music is entertainment; it can be a form of escapism too, so I hope it’s brief audio euphoria for them. But I also put some gems in the music so I hope they can walk away thinking about certain things in a different light or be moved to get more info on something they don’t quite understand but it sounds dope [laughs]. The music I came up listening to did that for me, I hope I can do the same.

Sherron Shabazz is a freelance writer with an intense passion for Hip-Hop culture. Sherron is your quintessential Hip-Hop snob, seeking to advance the future of the culture while fondly remembering its past.
View all posts by Sherron Shabazz →
This entry was posted in interview and tagged BlackWater, Dressed to Kill, End of the Rainbow, Grand Rapids, interview, Michigan, Tekh Togo. Bookmark the permalink.