A Conversation with Lord Sear 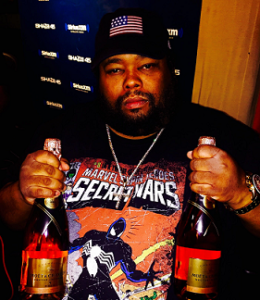 DJ Lord Sear wears many hats in Hip-Hop. He’s a DJ, producer, and vocalist. He’s worked with some of the most notable names in Hip-Hop like MF Doom, the Beastie Boys, and the late Big Pun. Sear served as a DJ on The Stretch Armstrong and Bobbito Show in the 90s and toured with Hip-Hop icon Eminem in the 2000s.

Lord Sear’s relationship with Eminem eventually led to him having his own show on Sirius/XM’s Shade 45 called “The Lord Sear Special.” The Lord Sear Special features a mix of music, comedy, and celebrity interviews. The show airs Monday through Friday from noon to 4 P.M. Eastern Standard Time.

The Real Hip-Hop spoke to Lord Sear about the evolution of deejaying, his relationship with Shade 45 founder Eminem, and The Lord Sear Special radio show.

TRHH: How much fun is it to do The Lord Sear Special on Shade 45?

Lord Sear: I’m not saying it’s something that I always wanted to do but when I started I was a DJ. I was a DJ for a rapper that was signed to Columbia named Kurious, he’s a good friend of mine. I was a jokester. I guess it grew quickly to being curious in radio through Bobbito. I was on the radio with Stretch and Bob, that’s how my career started. I didn’t know that I was actually going to have my own radio show. I really like doing my show. I have fun doing it because it’s what I wanna do. I play what I wanna play and I talk my shit, give people credit, and still have fun. Not to be dissing crazy people but it’s out of fun, not out of character. I’m not trying to disrespect anyone. I like having fun doing it. It’s good for me, it’s good for my heart, it’s good for my soul. I like doing it.

TRHH: The interview you did with London Keyes was crazy. Do you enjoy speaking to non-Hip-Hop people more than Hip-Hop people on the show?

Lord Sear: A little bit of a mixture. Dealing with a radio show that I had called The All Out Show we dealt with actors, actresses, and weird people. I was cool with that but I’m not trying to be a Howard Stern or a shock jock radio person. I just want to do my thing – have fun and play dope music. I like interviewing the Hip-Hop people sometimes. That’s why it’s called The Lord Sear Special because you get different aspects. I have a video game person that calls up, porn stars of course, maybe somebody weird, a DJ, a producer.

TRHH: Your relationship with Eminem goes back a while. How did you get linked up with Em?

Lord Sear: Through the radio show that I did with Stretch and Bobbito. His manager Paul Rosenberg dropped off music of his demo for me and Bob at Bobbito’s store back in ’97 or ’98. From there I got to get to know him and build a relationship. From there it went on to where I’m at right now. I never knew he was going to be where he’s at. It wasn’t like, “Hey man, I like Em, too.” Em was always a cool person. He’s a down to earth person. A cool cat, he was never fronting.

TRHH: Talk a little about how you hooked up with Ren Thomas and your involvement in his new album, I Been Nice.

Lord Sear: There was a spot called Vida in Jersey and everybody from rappers to DJ’s would come through. I met him out of nowhere. We just started talking. I just got to get to know him and wanted to work with him. I gave him some beats and stuff. That’s how we got cool a couple of years ago.

TRHH: You still deejay at clubs now and you’ve been doing it for a long time. What’s your opinion of Serato and how it’s changed how you can become a DJ?

Lord Sear: I’m not saying names but I knew rappers before that could actually deejay with vinyl – Lord Finesse, Redman, Rakim. I’m not saying Serato is easy but if you go to school for it at the Scratch Academy and you sit there and put the record back, turn it up, make sure the BPM’S work, they match, the sound effects, a lot of it is technology and what’s new. The 8-track could have been around forever, the cassette player could have been around forever, now they’re trying to destroy CD’s. There’s going to be new laptops with no CD player. You’ll just have a laptop with a USB. There are DJ’s that don’t even use Serato, they use USB’s. I think that if you really wanna be serious about becoming a DJ you should learn what was first, using vinyl. Learn it first before you’ll be caught out there and you ain’t got no vinyl and no nothing. It happened to a lot of DJ’s where they didn’t know what laptop to use, how much RAM or memory, and all that weird shit with technology. I think Serato is alright for what it is, to have fun with. I think it’s cool for some producers to do beats on it, too.

TRHH: What’s the hottest record in the clubs now and do you have a sure shot joint that you go to to light up the club every time?

Lord Sear: I can’t really tell you that because I haven’t really been a “club, club” deejaying in a while. If I was to go somewhere the Young M.A OOOUUU, but I’m not sure because I don’t really attend those clubs like that. You hear the same shit all the time. Drake is everywhere.

TRHH: Where are you spinning now and what kind of stuff are you playing?

Lord Sear: Sometimes on Wednesday’s I’ll meet G-Bo the Pro. He was known in the 90s for ill mixes and mixtapes. He’s from Spanish Harlem. He was your Puerto Rican version of Ron G with the ill blends. He has a party he does on Wednesday’s with me, DJ Cano, DJ Bambino, DJ Erika and Just. I’m playing old school Hip-Hop, 80s and 90s Hip-Hop and R&B. Maybe some 80s rock – white shit, breaks, it’s universal. That’s what I play.

TRHH: What’s next up for Lord Sear?

Sherron Shabazz is a freelance writer with an intense passion for Hip-Hop culture. Sherron is your quintessential Hip-Hop snob, seeking to advance the future of the culture while fondly remembering its past.
View all posts by Sherron Shabazz →
This entry was posted in interview and tagged DJ, DJ Lord Sear, Harlem, interview, Lord Sear, New York, Shade 45, The Lord Sear Special. Bookmark the permalink.